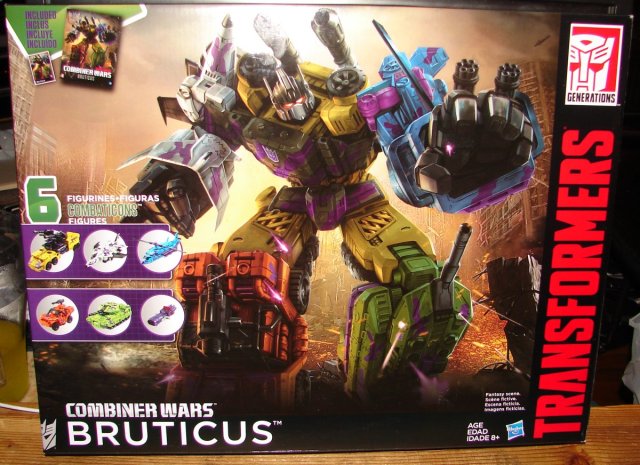 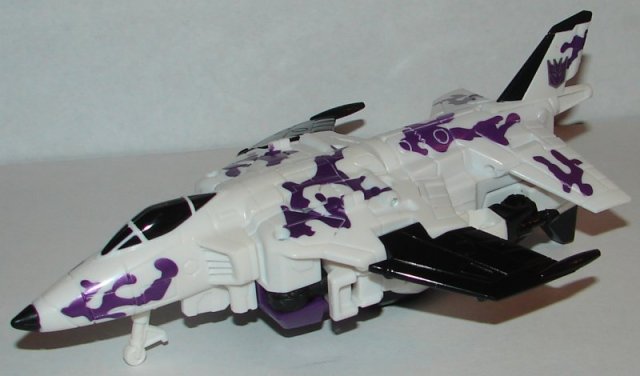 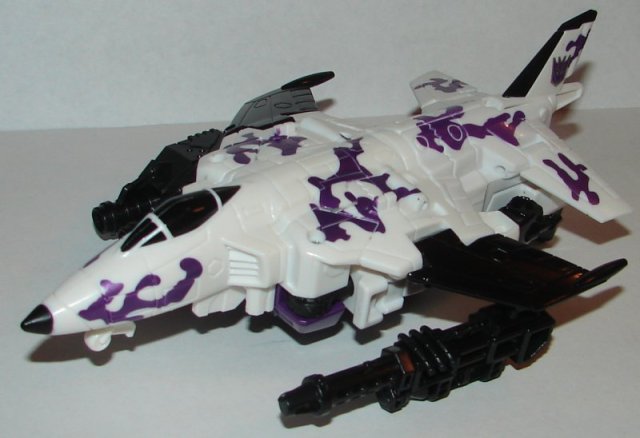 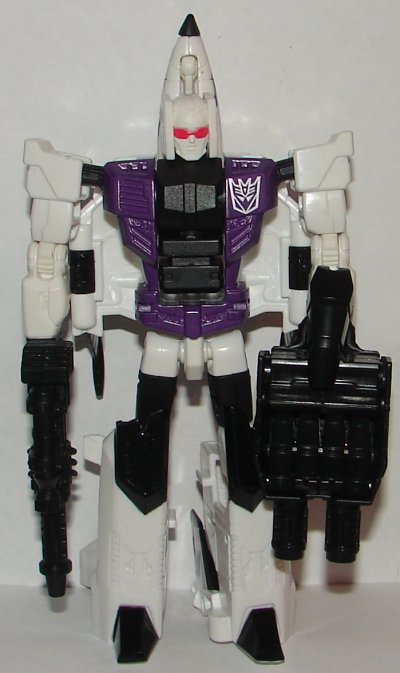 I am very disappointed that Hasbro did not use the Japanese Blast Off mold.  I am guessing the reason they didn’t is that it hadn’t been released in Japan yet.  I am hoping that next May, like Groove and Brake-Neck and Quickslingler before him, will be released on card.  Hopefully, Hasbro will release two versions, a G1 and a G2 version.  I’m not going to hold my breath.  In vehicle mode, Blast Off looks great with the purple camouflage, but in robot mode, you can’t see any of the camouflage and it makes him look really plain. 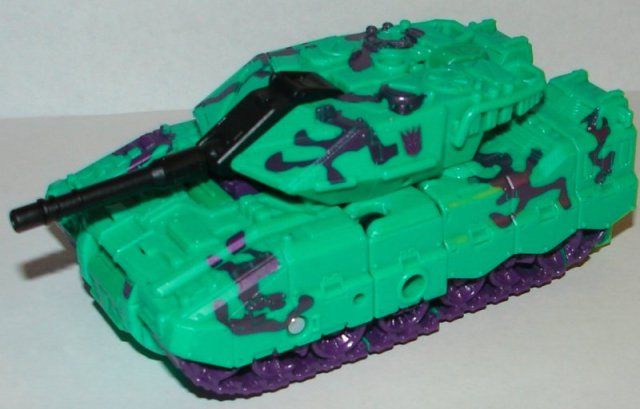 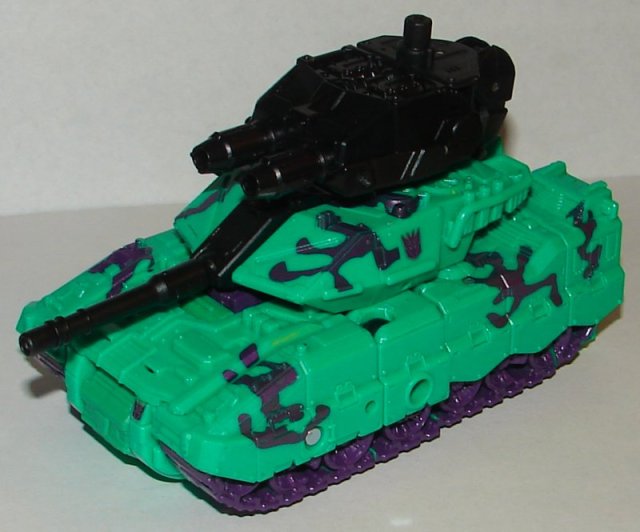 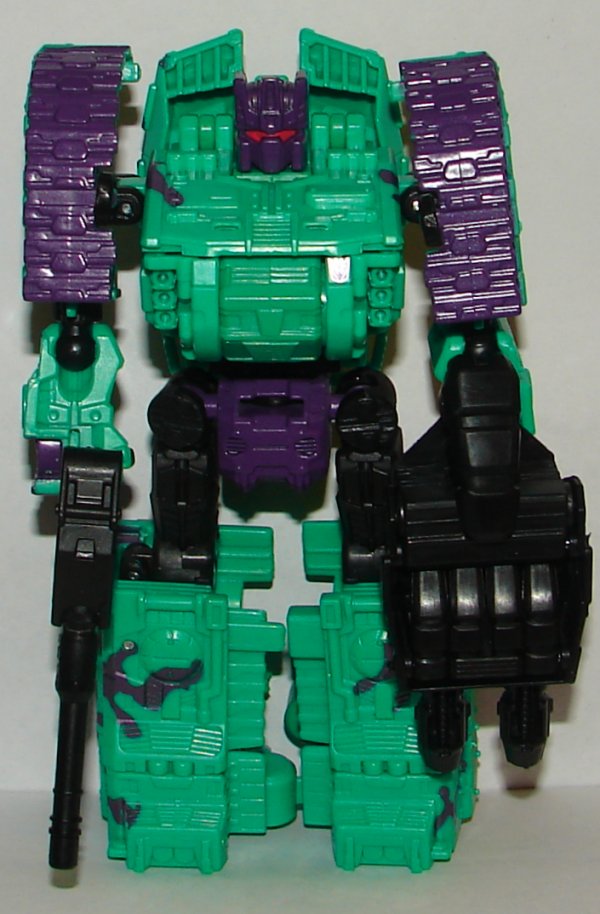 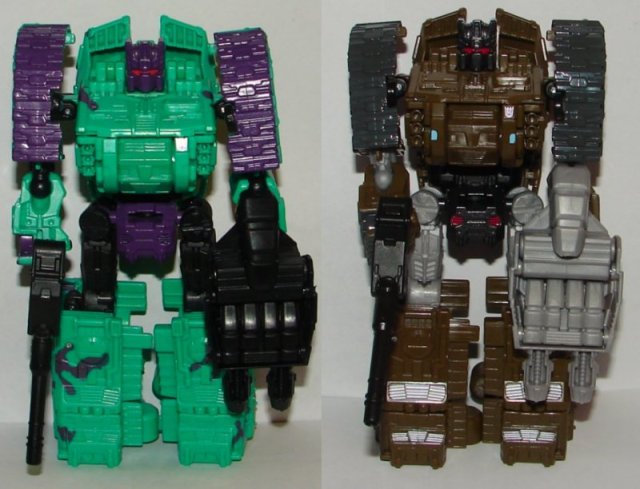 Brawl could use a little more camouflage, but other than that, he looks great. 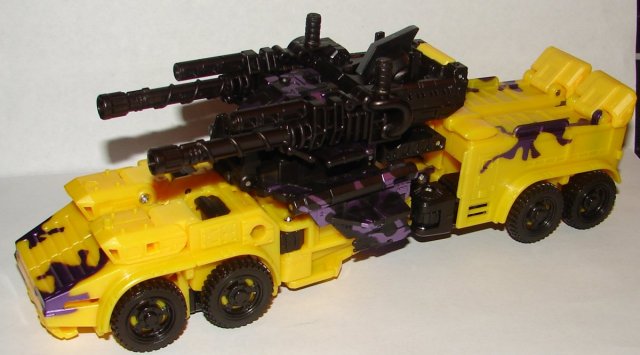 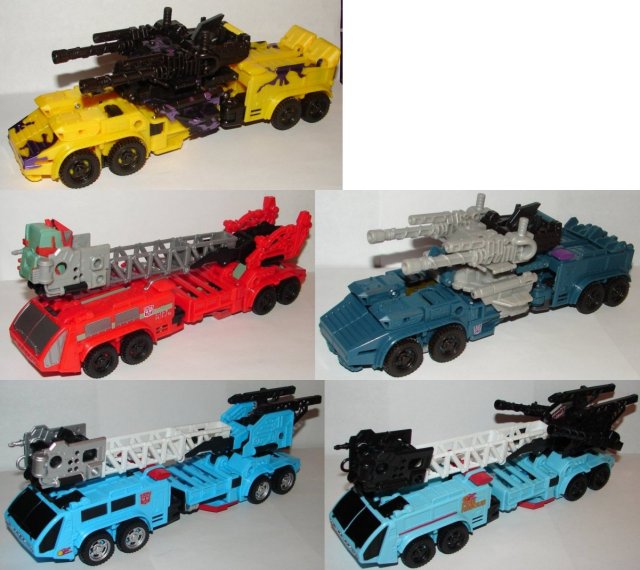 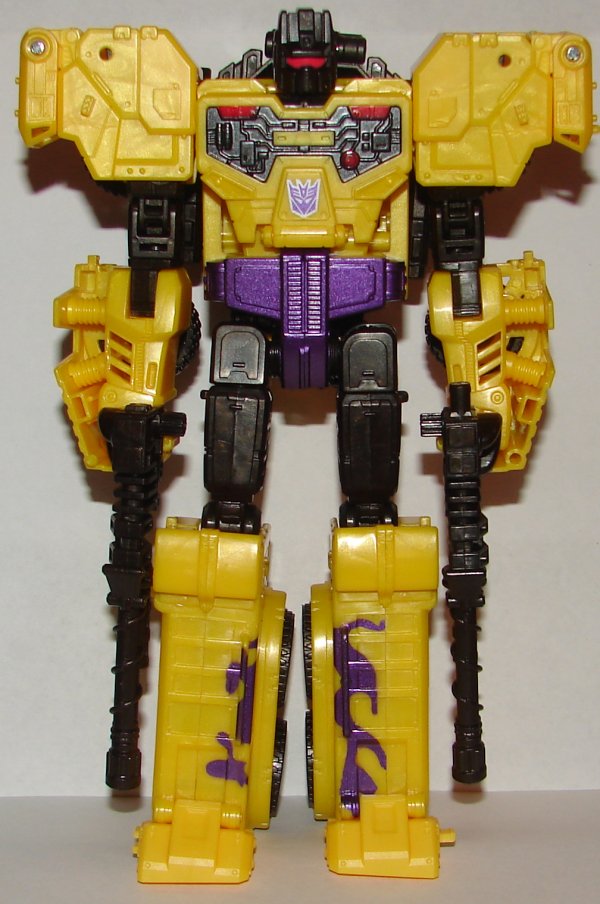 Onslaught needed some more camouflage, but the only real problem with him is that he’s got this enormous black mass on the top of the truck.  It needed some color.  Some silver paint, or even light purple on his guns and the mount would make him look so much better. 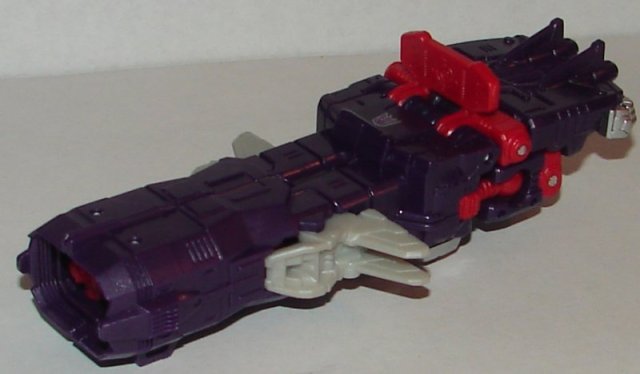 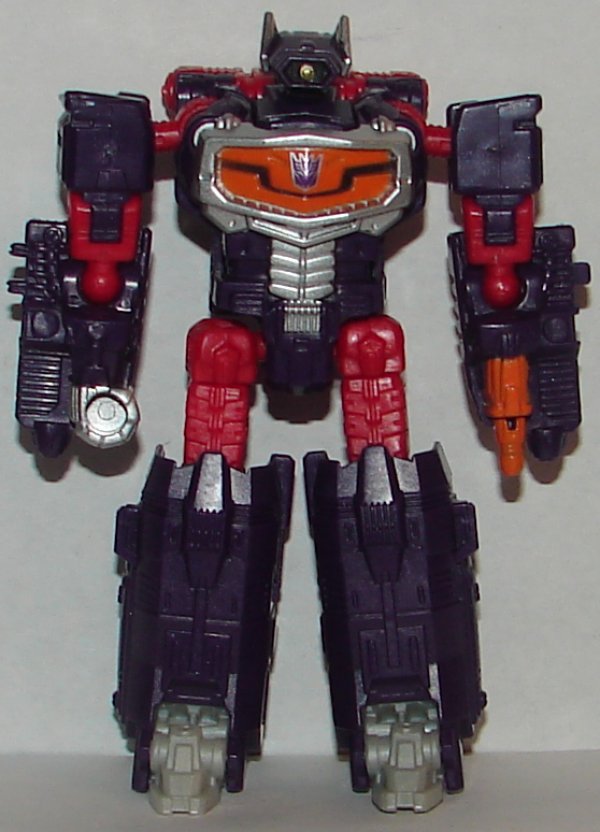 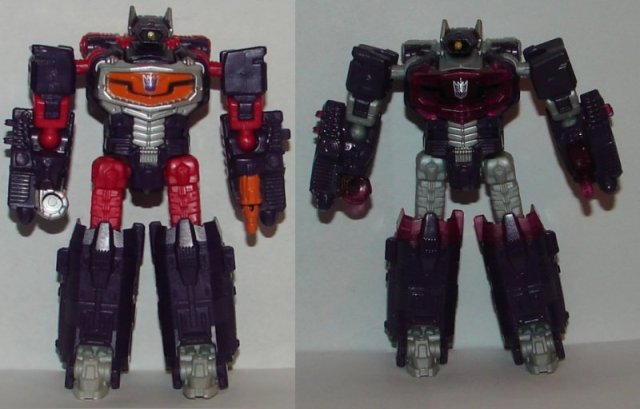 This is a travesty.  If you read my blog about G2 Superion, G2 Powerglide didn’t have any of the G2 art that you would expect.  They did the same thing with G2 Blackjack.  Both were at least repainted into colors that made them look like they belonged with G2.  Shockwave is a joke.  He’s still purple.  They changed the color of a few parts to red and painted his chest.  The didn’t include any of the translucent plastic.  He does not look like he belongs with G2 toy at all.  In an otherwise excellent set, it’s this kind of crap that really makes Hasbro look incompetent. 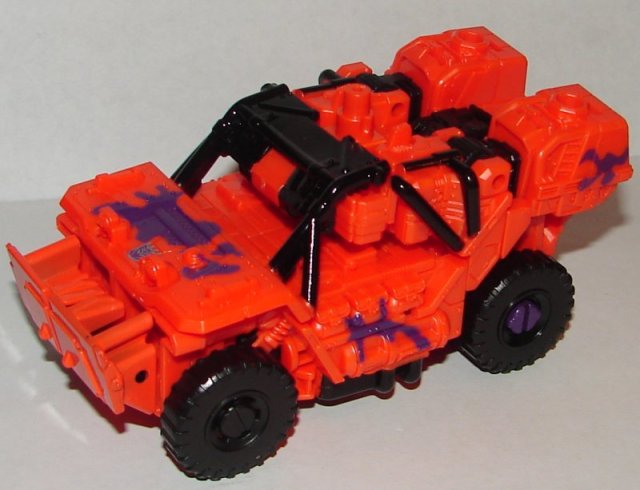 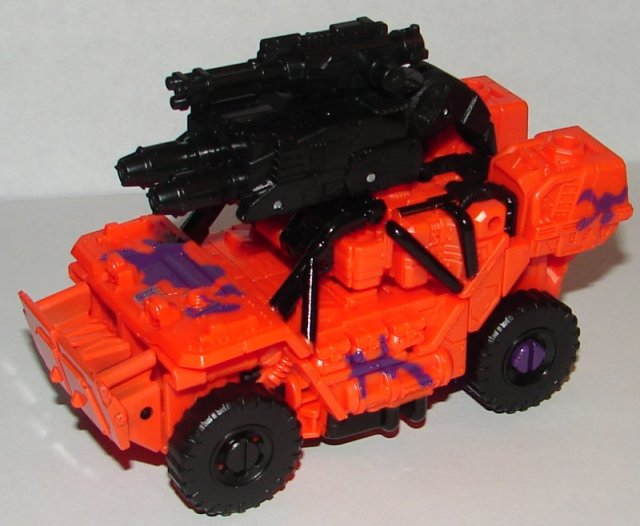 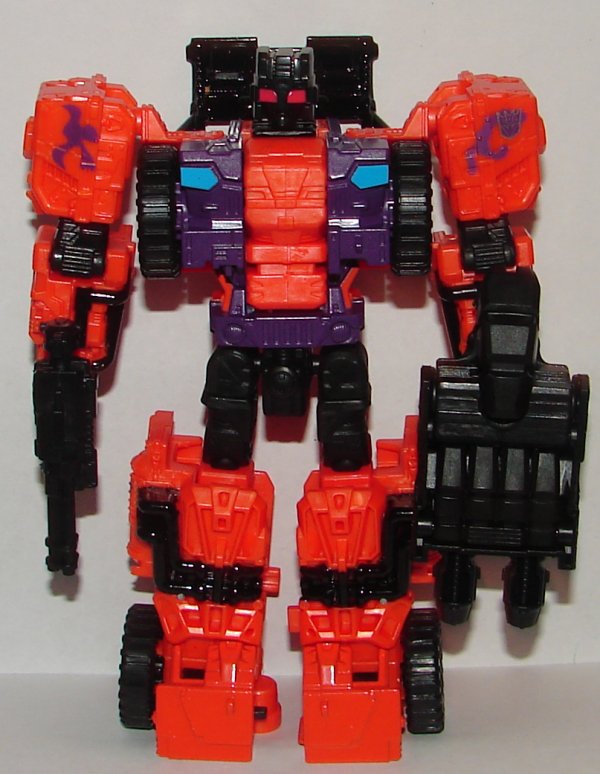 They did a really nice job on Swindle.  He looks great in vehicle mode, and even better in robot mode. 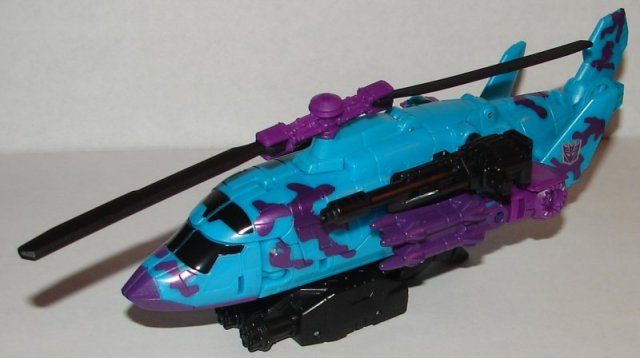 The colors are great on Vortex.  I am still disappointed from the original version that that Vortex did not get any remolds, but I certainly wasn’t expecting Hasbro to get it right.  They rarely do. 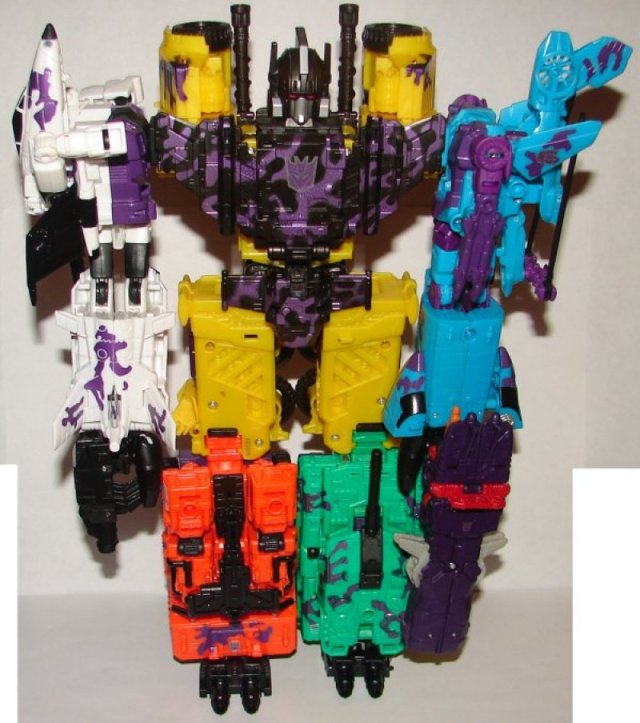 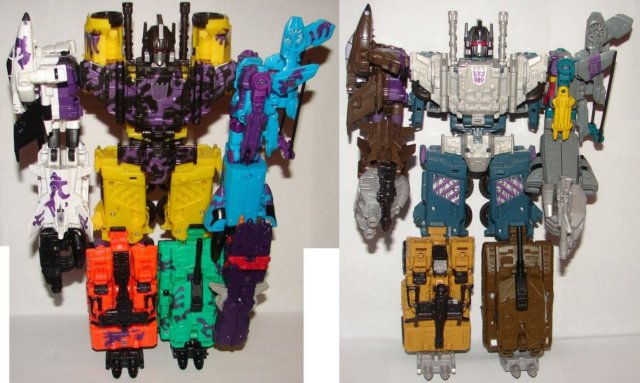 So, this is interesting.  I apparently had Bruticus transformed incorrectly in my original review.  When I transformed his shoulders, I did it the way Defensor’s shoulders are transformed.  Bruticus is supposed to have Onslaught’s arms flipped up giving him the big shoulders.  It’s interesting, as this is the first time a Combiner Wars combiner’s arms have slid in from the front rather than down on top.  The wings on his chest shield peg into Onslaught’s arms which help keep the combiner arms in place.  Bruticus looks pretty great, accept for the total joke that is Shockwave’s color scheme.  He doesn’t belong in this set in those colors.

Overall: G2 Bruticus is one of my favorite G2 toys.  I think this one is a must for any G2 fan.

Update: A friend of mine pointed out to me that the incompetents at Hasbro used G1 Decepticon logs instead of the G2.  I didn’t even notice.

I’m 36 years old, and I work in network tech support for a public school system. I am a huge fan of Star Trek, Transformers, Harry Potter, and Marvel Comics as well as numerous other fandoms. I’m a big sports fan, especially the Boston Red Sox and the New England Patriots. I collect toys (mostly Transformers but other stuff too), comic books, and Red Sox baseball cards. I watch an obscene amount of television and love going to the movies. I am hopelessly addicted to Wizard Rock and I write Harry Potter Fanfiction, though these days I am working on a couple of different original YA novels.
View all posts by lmb3 →
This entry was posted in Toy Reviews, Toys, Transformers and tagged Autobots, Blast Off, Brawl, Bruticus, Combaticons, Combiner Wars, G2, Generation 2, Generation Two, Generations, Onslaught, Shockwave, Swindle, Toys, Transformers, Transformers Generations, Vortex. Bookmark the permalink.