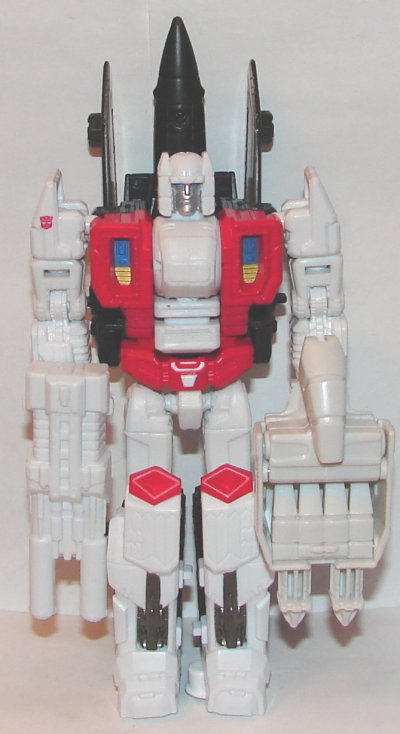 In vehicle mode Unite Warriors Air Raid is missing the silver paint on the back window of his cockpit. Takara usually doesn’t make mistakes like that. Otherwise, I love the paintjob, but I’m not sure I like it better than the Hasbro version. I really like the colored stripes on the Hasbro version’s wings. In robot mode I prefer the Takara version with the yellow and blue on his chest, and silver hands. I do like the blue on top of his head on the Hasbro version.

In vehicle mode Fireflight and Quickslinger are not that different from their Hasbro counterparts, and I can’t say one is better than the other, they’re just different. The Takara version does have one great addition, the black stripes on top of the jet modes. The G1 toys all had black bars that connected the tail and nose of each jet to the main body. Those black stripes make them look more like the G1 toys. It’s a really nice touch. In robot modes, I actually prefer the Hasbro version. I don’t say that very often. On Fireflight I prefer the blue and silver on his chest and on Slingshot I like the blue eyes and silver paint on the sides of his chest, and placement of his Autobot logo. 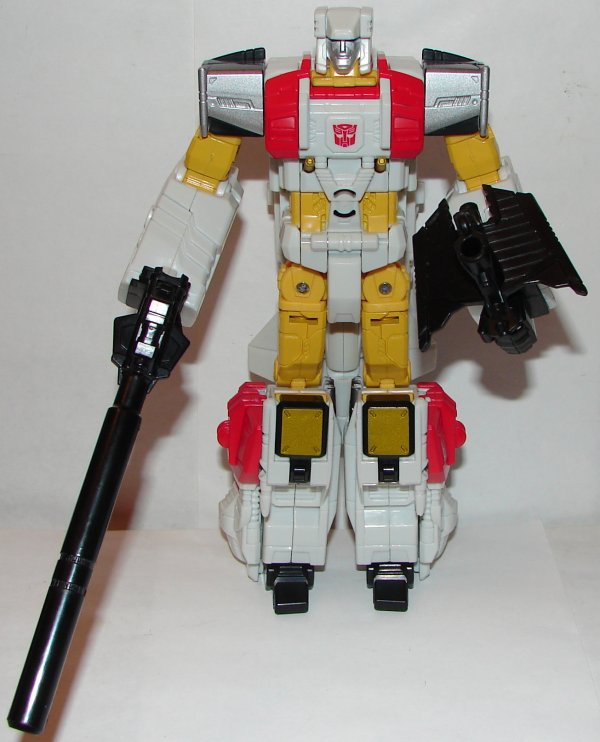 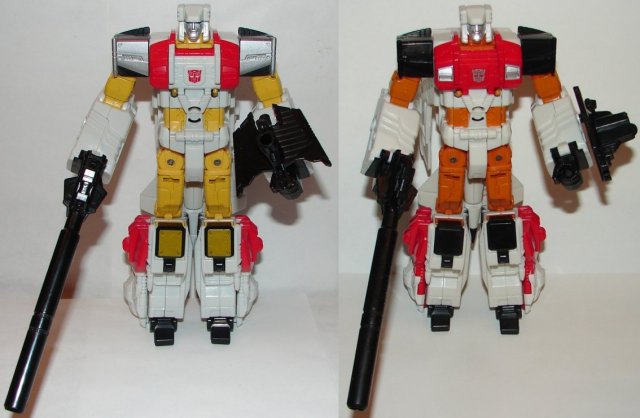 For Silverbolt (and probably the others two, I just haven’t watched the cartoon in a while) Takara went with a more animation accurate deco. I do really like the whiter plastic. In robot mode I prefer the Takara yellow to the orange of the Hasbro version. I also like the white chest, painted knees, and silver wings on his shoulders on the Takara version. 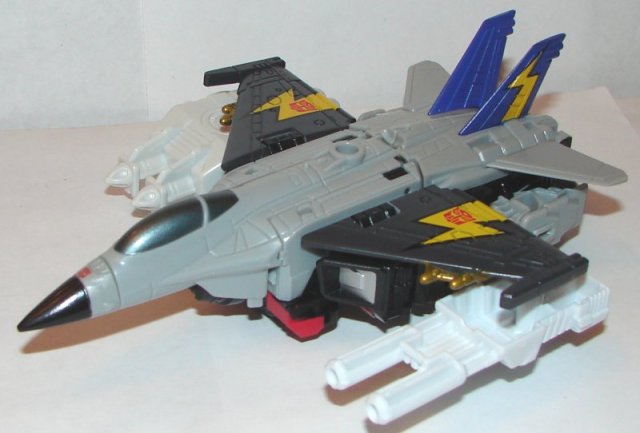 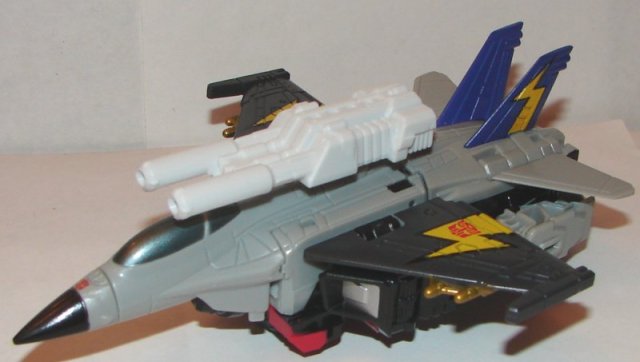 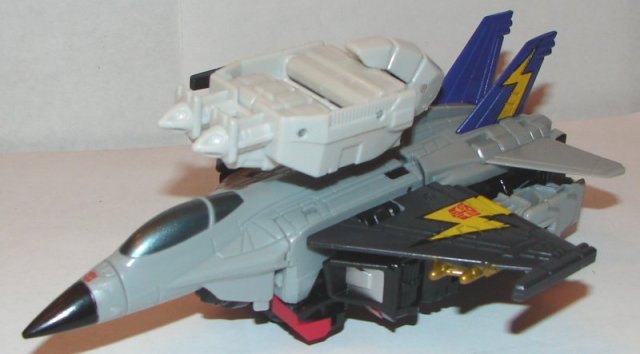 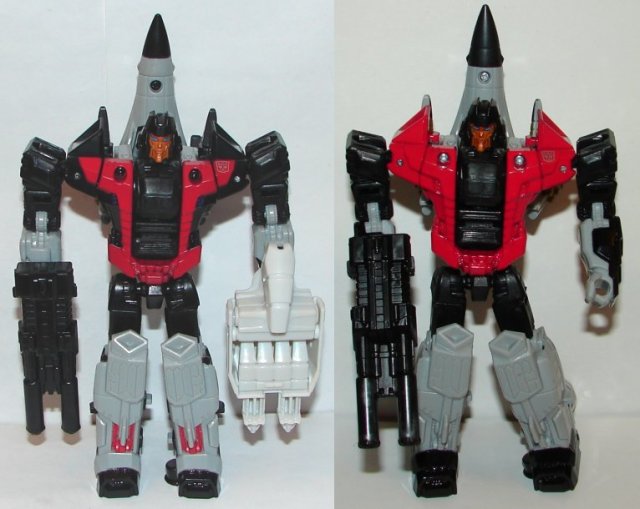 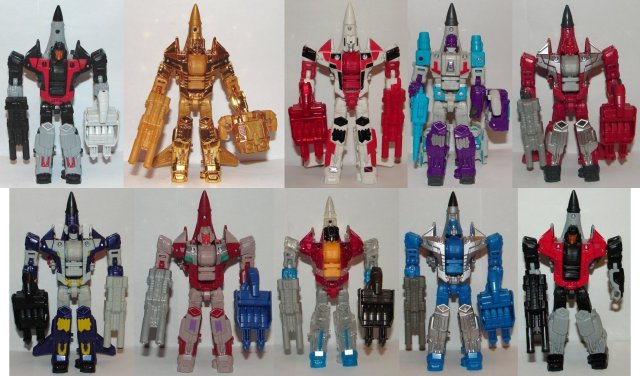 Both versions of Skydive look great, but I do like the gold paint on the wings of the Hasbro version. In robot mode, I like the Takara version with the black shoulders and black on the sides of his chest and torso. It’s a small thing, but the use of black screws instead of silver look better on his chest.

The Takara version of Superion is hands down better than the Hasbro version. For starters, Hasbro has the limbs in the wrong places, and lacks Slingshot. (Yeah, I know they released him later, but this is Superion as he was officially released.) Then there is Alpha Bravo, don’t even get me started on that. But it’s the changes to Silverbolt that really make the Takara version better. The red paint on his hips looks a thousand percent better, and they put yellow paint only at the top of his legs rather than orange paint all the way down them. I like the way they colored his chest and abdomen. The biggest change, and best one in my opinion, is the gold antennae instead of the orange on the Hasbro version. The antennae are also made of different plastic. It’s not hard plastic, but feels harder than the Hasbro version. The Hasbro version’s antennae were impossible to get completely straight up. The Takara version doesn’t stick at all.

Overall: I’m so glad they reissued this, as I didn’t pick it up originally. I am crossing my fingers they will reissue others as I still need Menasor and Grand Prime as well.

I’m 36 years old, and I work in network tech support for a public school system. I am a huge fan of Star Trek, Transformers, Harry Potter, and Marvel Comics as well as numerous other fandoms. I’m a big sports fan, especially the Boston Red Sox and the New England Patriots. I collect toys (mostly Transformers but other stuff too), comic books, and Red Sox baseball cards. I watch an obscene amount of television and love going to the movies. I am hopelessly addicted to Wizard Rock and I write Harry Potter Fanfiction, though these days I am working on a couple of different original YA novels.
View all posts by lmb3 →
This entry was posted in Toy Reviews, Toys, Transformers and tagged Aerialbots, Air Raid, Combiner Wars, Fireflight, Firefly, Generations, Quickslinger, Silverbolt, Skydive, Slingshot, Superion, Toys, Transformers, Transformers Generations. Bookmark the permalink.