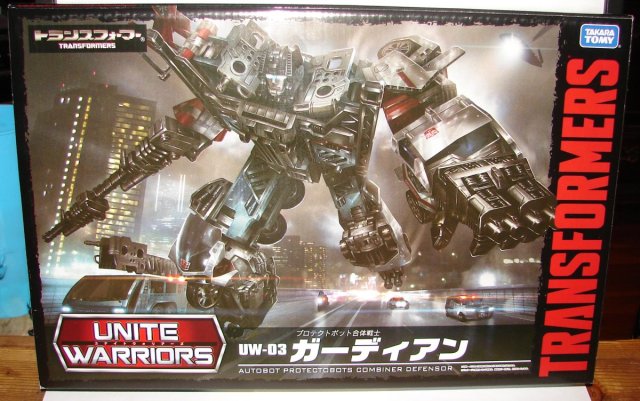 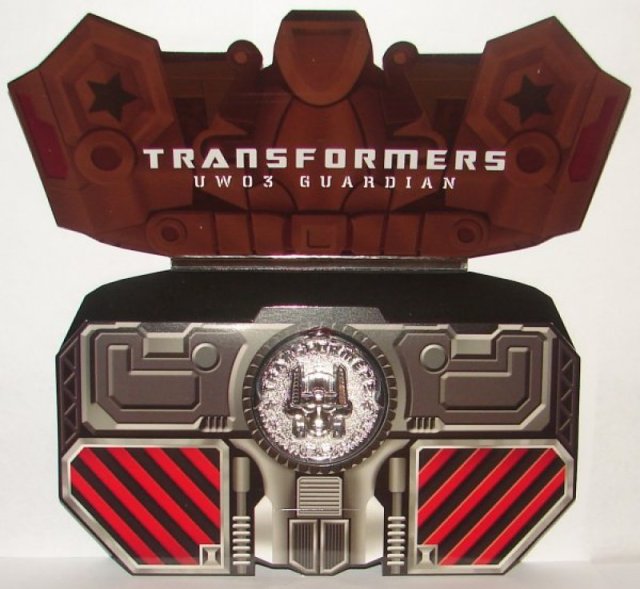 Finally we have Groove!  Read my reviews of the USA versions of Blades, Defensor, First Aid, Hot Spot, and Streetwise.  My main focus will be color differences and Groove. 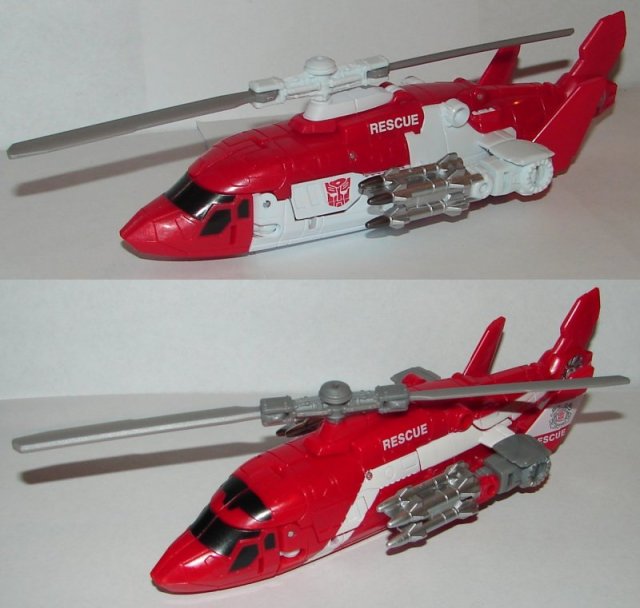 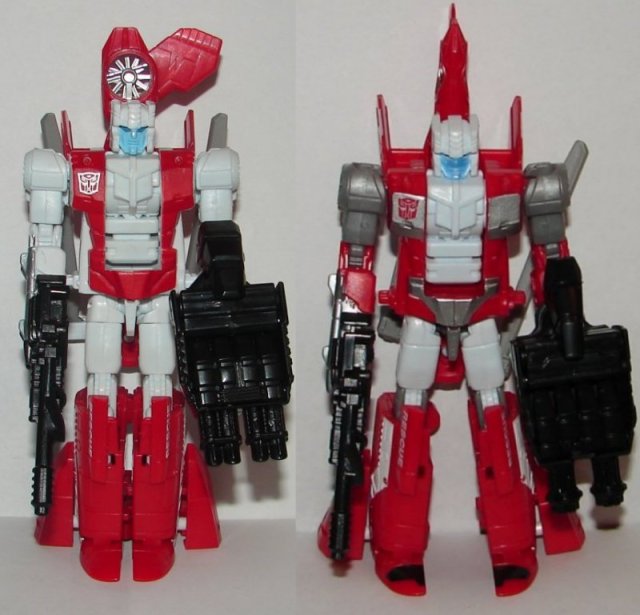 Blades isn’t hugely different, but I do like the Unite Warriors version as it has more white on the sides of his copter mode and the more G1 accurate white arms. 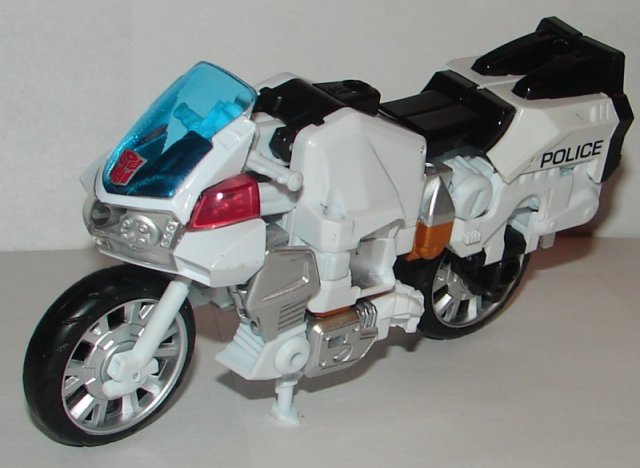 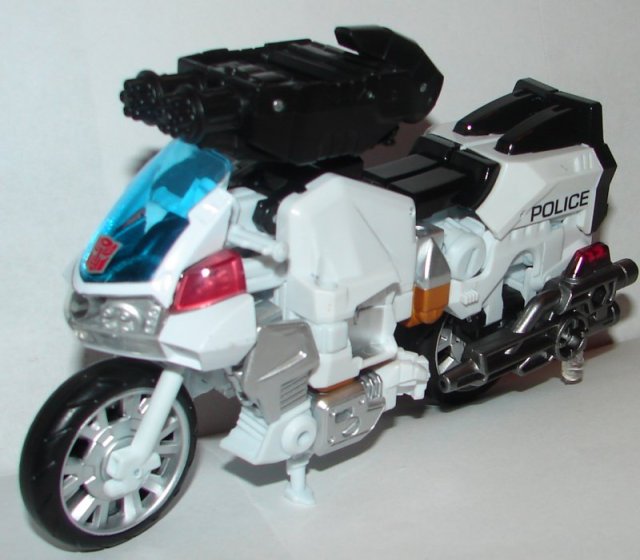 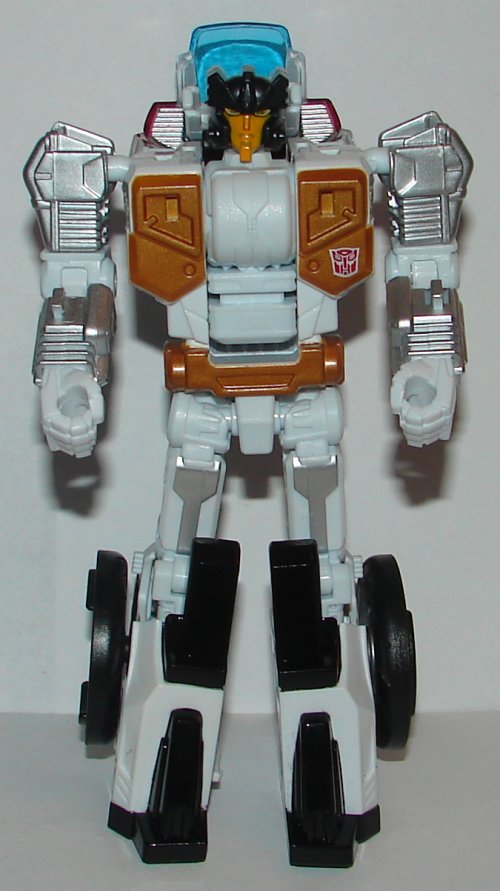 Groove is awesome.  I love his motorcycle mode.  It’s perfect, as is his robot mode.  I love his head sculpt and he has great paint apps.  His guns are molded in translucent red plastic painted silver so they have the red light tops on them.  I really love this toy.  Was it worth spending $10 on the set?  I’m not as sure of that. 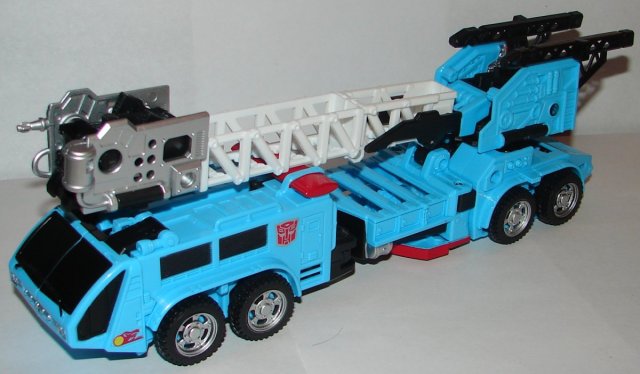 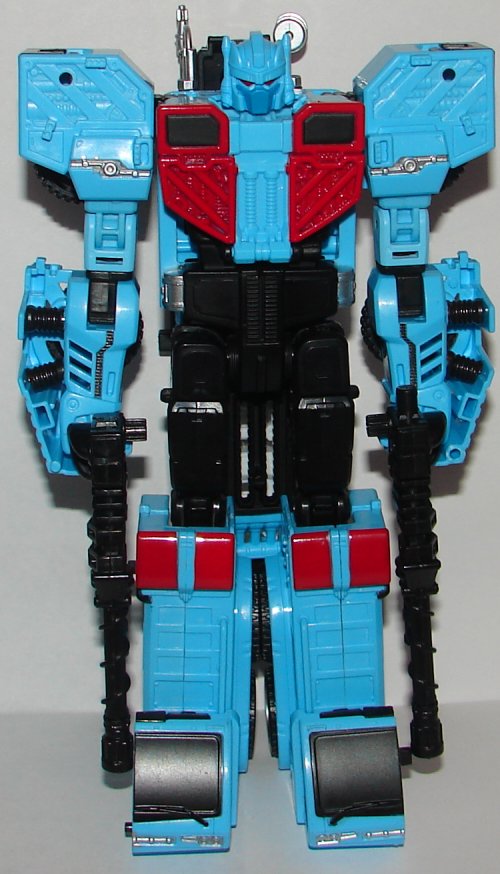 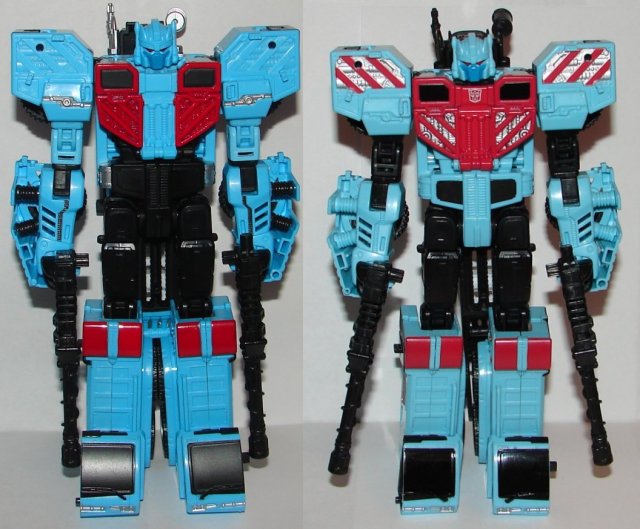 Here’s an interesting one.  The USA Hot Spot has overall better paint apps, but I prefer the darker blue of the Japanese version.  The Japanese version especially looks better in fire truck mode as the base of the ladder isn’t all black.  In robot mode the USA version has vastly superior paint apps.  I really like all the red and silver.  This one is really a toss up. 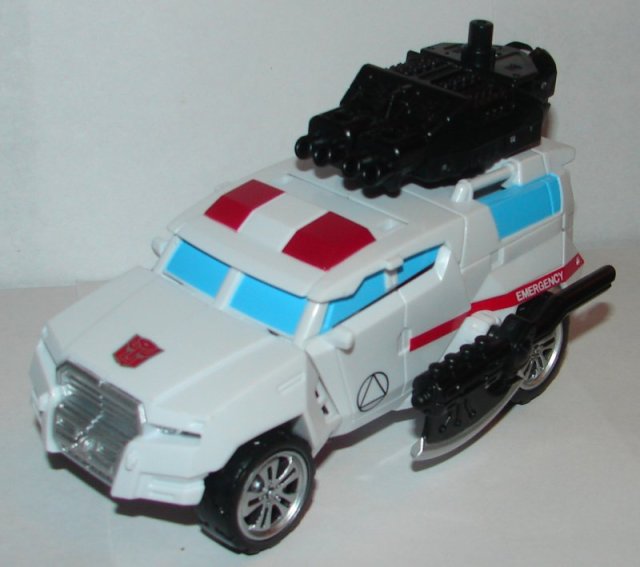 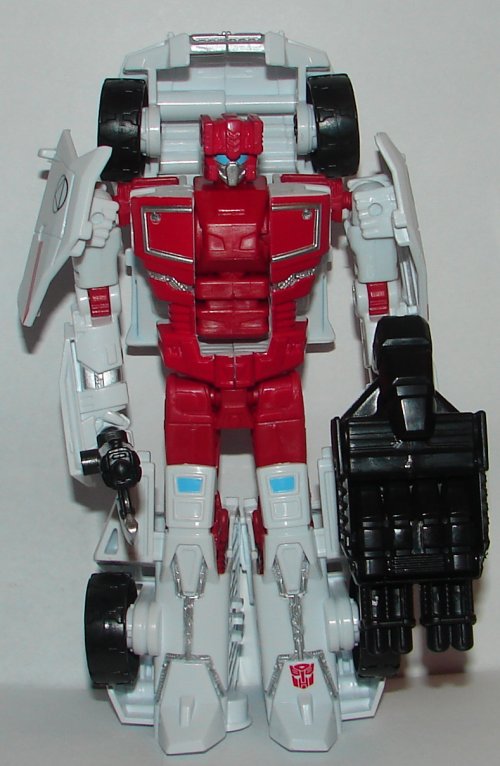 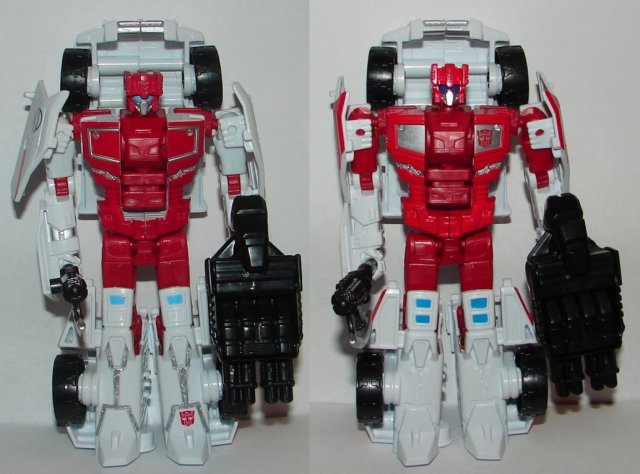 In ambulance mode I really like the USA version’s thick red striping.  They are otherwise very similar.  I am curious to know why the Japanese version has that odd symbol on the side of the vehicle.  It looks like the symbol for the Deathly Hallows without the vertical line.  In robot mode the two are very similar, but I really like the silver detail on the legs of the Japanese version. 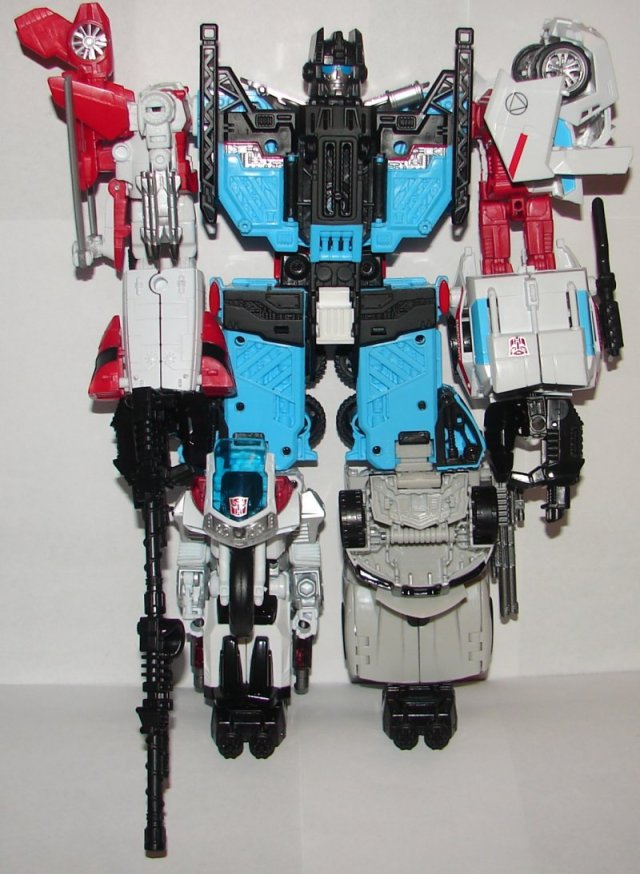 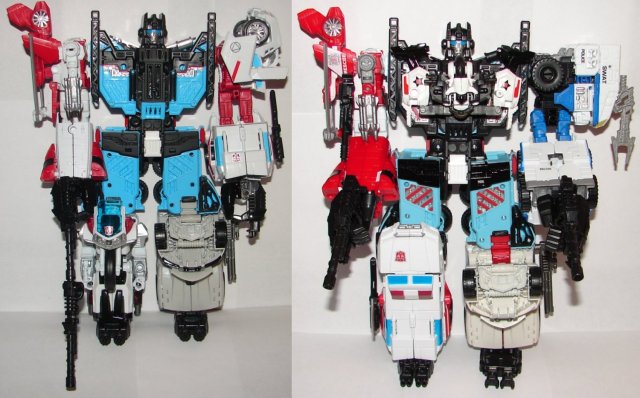 There are a lot of small differences between the Japanese and USA versions of Defensor, but the biggest difference is Groove.  I understand why Hasbro chose to go with a Legends Class Groove, it’s more in scale.  My question is, who is he more in scale with?  He certainly is better in scale with Streetwise and First Aid, but if you’ll notice those two are completely out of scale with Hot Spot and Blades.  If making Groove a Legends Class toy would really bring them all in to scale, then I could understand it, but all they really did is put him in scale with two of the others in the set.  That makes very little sense.  And the biggest problem is that the USA Defensor does not look like Defensor.  The Japanese one does.  What they should have done is make Legends Class Groove a weapon.

Overall: I think there is little question that the Japanese version is overall superior as it actually looks like Defensor.  There are small things I prefer on the USA version, but I highly recommend Unite Warriors Defensor.

I’m 36 years old, and I work in network tech support for a public school system. I am a huge fan of Star Trek, Transformers, Harry Potter, and Marvel Comics as well as numerous other fandoms. I’m a big sports fan, especially the Boston Red Sox and the New England Patriots. I collect toys (mostly Transformers but other stuff too), comic books, and Red Sox baseball cards. I watch an obscene amount of television and love going to the movies. I am hopelessly addicted to Wizard Rock and I write Harry Potter Fanfiction, though these days I am working on a couple of different original YA novels.
View all posts by lmb3 →
This entry was posted in Toy Reviews, Toys, Transformers and tagged Blades, Combiner Wars, Defensor, First Aid, Generations, Groove, Hot Spot, Streetwise, Toys, Transformers, Transformers Generations. Bookmark the permalink.