These are kind of sad, to be honest.  They aren’t even buildings, just the fronts of buildings, and they don’t make a lot of sense. 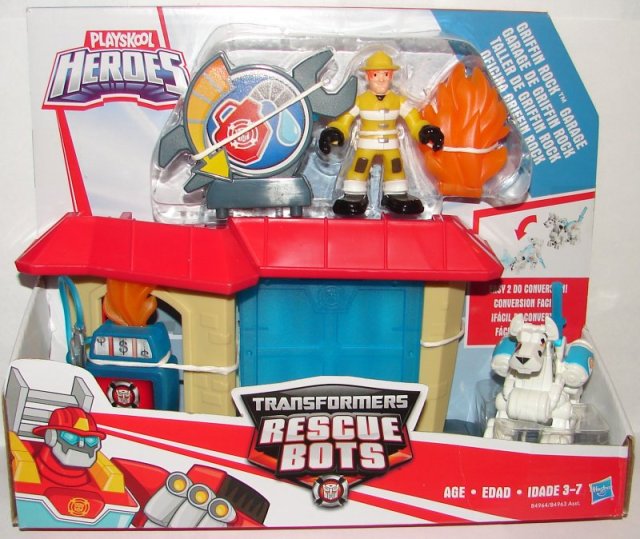 The building itself is the front of a garage or gas station.  It has flip up flames so it can be on fire.  The garage door flips up.  Really not much to this.  It comes with a Kade Burns figure and a robotic Dalmatian that transforms into a water cannon.  The Dalmatian is pretty cool, though when turned into a water cannon, he can’t actually stand up as he is too front heavy.  He will work great as an accessory for Heatwave.  Unfortunately, they don’t even bother to give him a name. 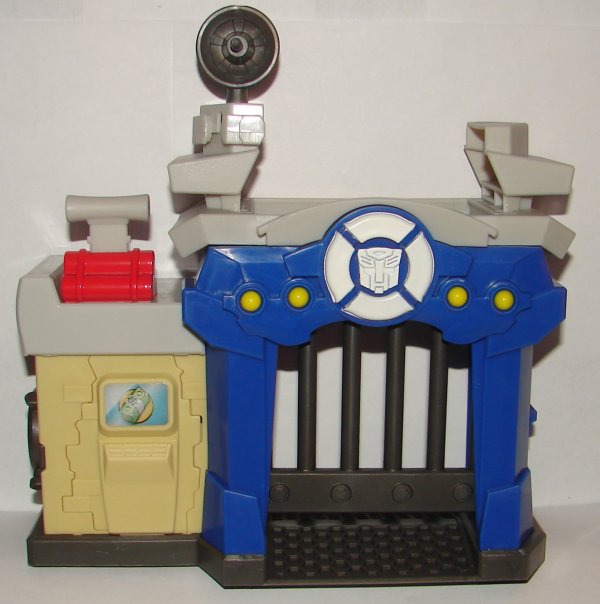 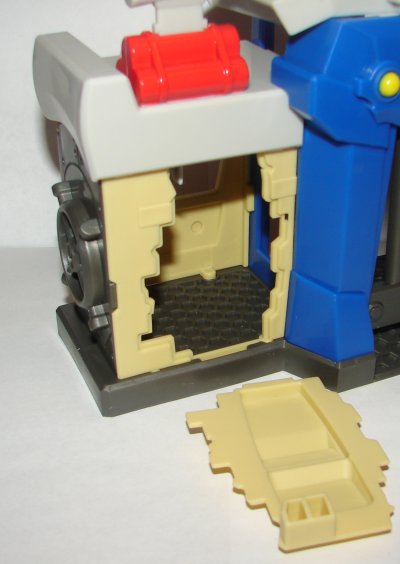 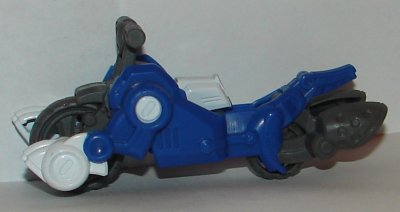 The Police station apparently has it’s jail on the outside.  Either that or it’s meant to be a driveway, but then the bars don’t make much sense.  This police station also seems to have an ATM machine attached to it.  This seems a bit odd to say the least.  On the roof of the ATM is pile of dynamite with a plunger.  Funny thing is, I think the dynamite is supposed to be far from the plunger so you don’t get blown up, but what do I know?  If you push down the plunger it blows a whole in the wall.  However, there is a vault door on the side, and when you open it, you see a feeling thief.  Why, if he blew a whole in the wall, did he bother to open the vault door to escape?  I realize I am putting way too much thought into this, but on the other hand, if Hasbro had put just a tiny bit of thought into designing it, then it wouldn’t be stupid.  The set comes with Chief Charlie Burns, and a police dog that transforms into a motorcycle.  This is pretty cool, but since the Chief Charlie Burns figure has no leg articulation, he can’t actually ride it.  Seems kind of pointless, which is too bad, because the dog, who is of course, unnamed, is otherwise pretty cool.

Overall: Clearly Hasbro must have run a contest for employees’ kids to design toys as no adult could design something this stupid.  I hate myself for owning these.

I’m 36 years old, and I work in network tech support for a public school system. I am a huge fan of Star Trek, Transformers, Harry Potter, and Marvel Comics as well as numerous other fandoms. I’m a big sports fan, especially the Boston Red Sox and the New England Patriots. I collect toys (mostly Transformers but other stuff too), comic books, and Red Sox baseball cards. I watch an obscene amount of television and love going to the movies. I am hopelessly addicted to Wizard Rock and I write Harry Potter Fanfiction, though these days I am working on a couple of different original YA novels.
View all posts by lmb3 →
This entry was posted in Toy Reviews, Toys, Transformers and tagged Adventure Play Sets, Charlie Burns, Chief Charlie Burns, Garage, Griffin Rock Garage, Griffin Rock Police Station, Kade Burns, Police Station, Rescue Bots, Toys, Transformers, Transformers Rescue Bots. Bookmark the permalink.