Unite Warriors Devastator is finally out.  Overall he is very similar to the original retail Combiner Wars Devastator in paint apps, but there are some differences from both USA versions.  I’m not going to go into that too much.  You can look at the pictures.  The differences between the Retail and SDCC toys are noted.  I didn’t bother note them on the Japanese versions.  I have to say, I am overall disappointed with the paint apps.  The SDCC version is definitely the best, though some of that detail is actually stickers, it’s still better than the Japanese.  Of course, the Japanese does and a few details the others don’t.  I’m going to mostly focus on the mold changes.  You can read my reviews of the retail and SDCC version.  The new guns are very cool, but I am disappointed that they made no attempt to give them G1 accurate guns.

Bonecrusher’s paint apps on the Unite Warriors versions are vastly inferior to the SDCC version.  Some of Hasbro’s tendencies toward cheapness seem to be rubbing off on Takara.

Unite Warriors Hook has a few nice paint details in vehicle mode that the America version does not have, but in robot mode, I really prefer the silver on the chest of the SDCC version. 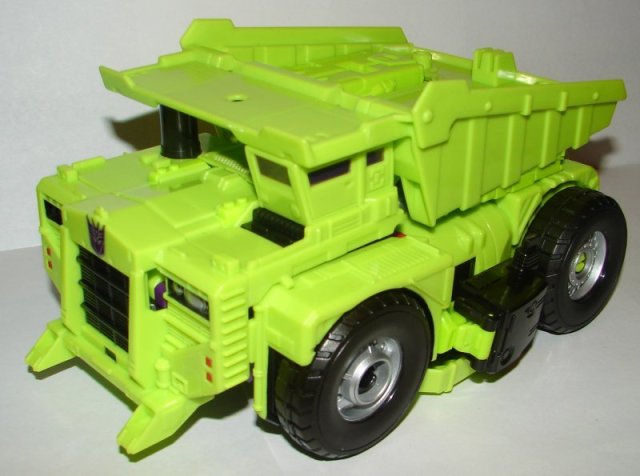 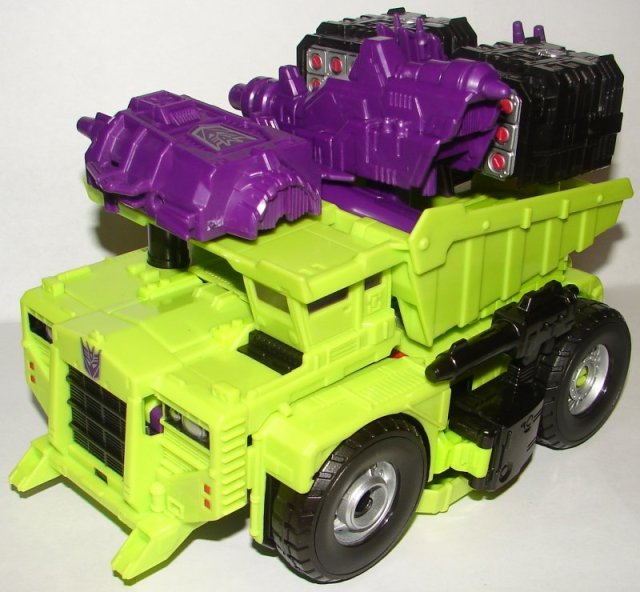 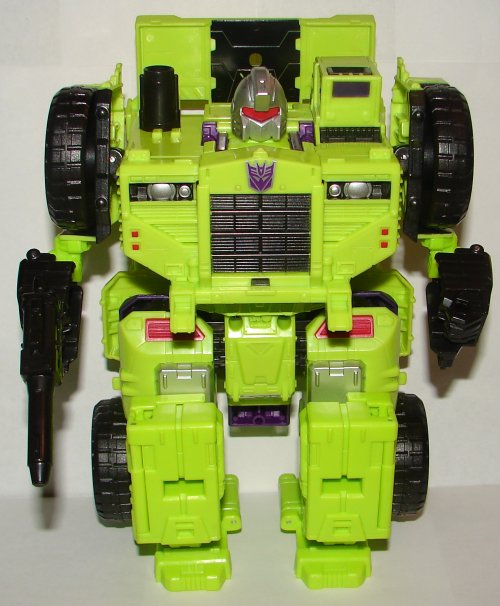 First of all, who knew that Long Haul was designed to carry all the Devastator parts in vehicle mode?  The Combiner Wars versions have the same molding, but no one at Hasbro bothered to put in the instructions that he is designed this way.  What idiots are in charge at Hasbro that they fail to put stuff like that into the instructions?  Seriously, someone at Hasbro needs to be fired.  Maybe more than one.  They also remolded his arms so that he has elbows.  Frankly this was completely unnecessary.  I think it makes Devastator slightly (very slightly) less stable for there being an extra joint on a part that helps hold Bonecrusher on.  I also don’t think it really adds anything to the toy.  If they were dead set on giving him elbows, then they should have done it so his arms were straight and didn’t have the odd bend in them.  They fixed a problem that didn’t need to be fixed and left the one in that they should have fixed. 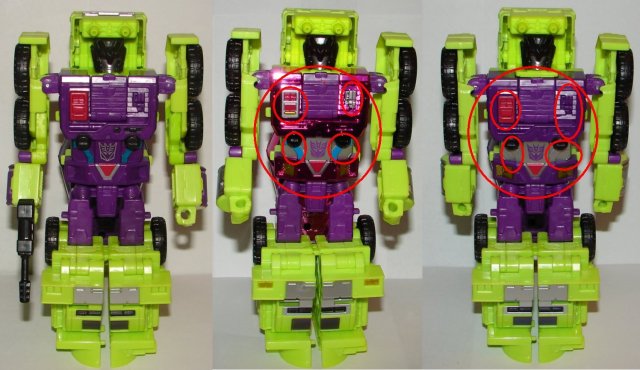 I was under the impression that Mixmaster would be remolded so that Devastator’s foot would be a little better looking.  This was not the case, I must have misunderstood.  There is silver paint so he has a grill, but that’s it.

They really should have painted the inside of Scavenger’s treads like the SDCC version. 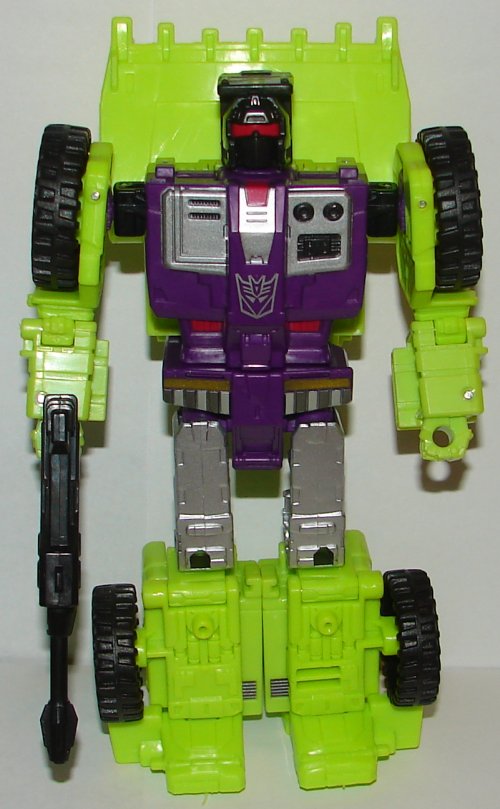 Scrapper was the other recipient of new elbows.  As I speculated in my review, they did in fact need a way of locking his elbows so that Devastator would remain stable.  They did this by putting a lip so that when his elbow is straight, it’s locked.  Unfortunately, it is very hard to unlock it.  You have to put way more pressure on it than I am comfortable putting on it to make his elbow unlock and bend.  This was just a completely unnecessary change and really adds nothing to the toy. 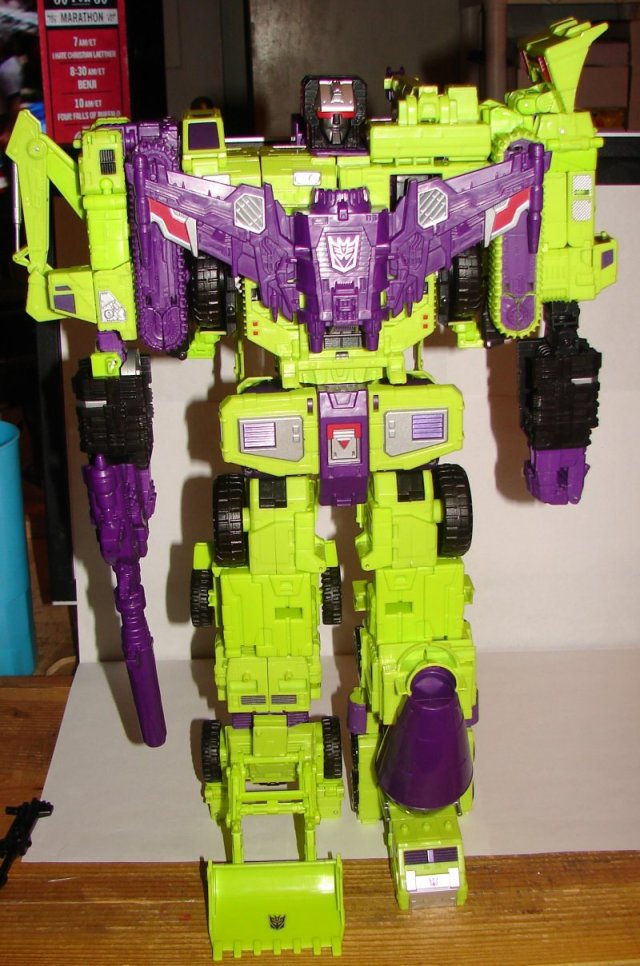 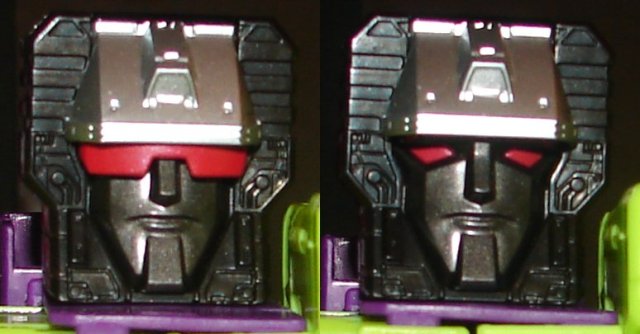 There are obvious color differences between the various versions of Devastator.  The most interesting change is the new head sculpt.  It has a flip out visor so you can have animation or toy version of Devastator.

Overall: The guns would be much more appealing if they were made to look like the G1 guns.  As it is, they are a necessary addition, but I’m not sure that those and the new head are really worth the $230 for this toy.  It’s certainly nice, but I think the SDCC Devastator is probably the overall better version, though probably a frankensteining of all three would be best.

I’m 36 years old, and I work in network tech support for a public school system. I am a huge fan of Star Trek, Transformers, Harry Potter, and Marvel Comics as well as numerous other fandoms. I’m a big sports fan, especially the Boston Red Sox and the New England Patriots. I collect toys (mostly Transformers but other stuff too), comic books, and Red Sox baseball cards. I watch an obscene amount of television and love going to the movies. I am hopelessly addicted to Wizard Rock and I write Harry Potter Fanfiction, though these days I am working on a couple of different original YA novels.
View all posts by lmb3 →
This entry was posted in Toy Reviews, Toys, Transformers and tagged Bonecrusher, Combiner Wars, Devastator, Generations, Hook, Long Haul, Mixmaster, San Diego Comic Con, Scavenger, Scrapper, SDCC, Toys, Transformers, Transformers Generations, Unite Warriors. Bookmark the permalink.