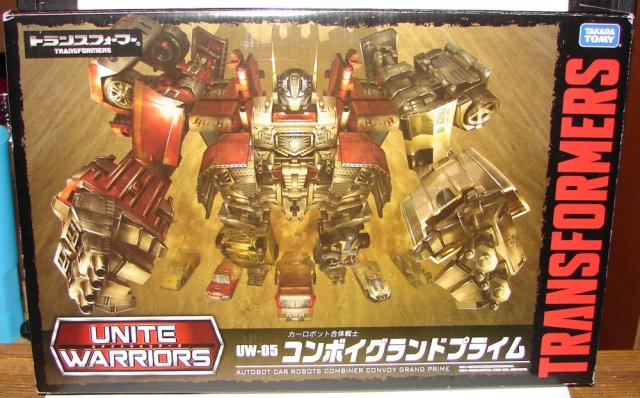 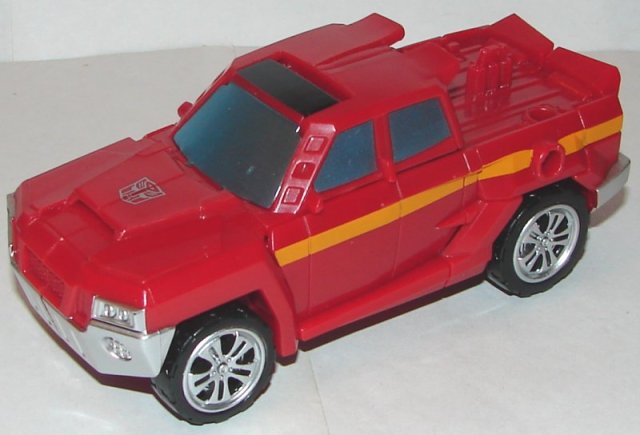 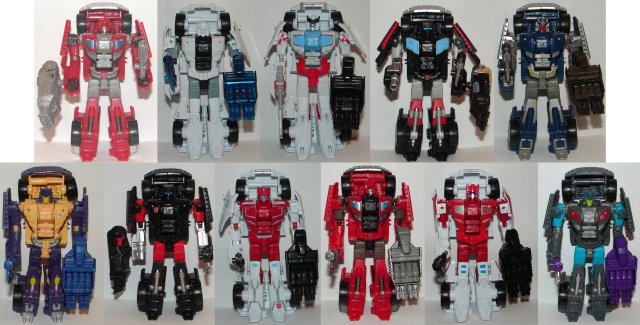 In vehicle mode, Unite Warrior’s Ironhide has silver bumpers and hubcaps, where the Hasbro version was dark gray. They painted the skylight on his roof. The striping on his sides is darker. Hasbro’s instructions failed to address weapon placement in vehicle mode. Logically, since Hasbro didn’t bother include it in the instructions, I would have placed the weapon with the handle forward like a gun. Takara’s instructions specify the opposite, with the axe head forward. I took photos of it both ways, but the axe head forward is the correct one. In robot mode silver paint has been added to his waist, and his Autobot logo is bolder. They have changed the combiner peg in his chest to gray from black. It looks better, but it should have been red. They changed the color of his upper arms from dark gray to red, and the connector that holds on his vehicle side panel to his shoulder from red to gray. This is a small, but significant change. Ironhide’s arms should be red, so I much prefer the Unite Warriors version for that reason. They also painted his hands, another great change. 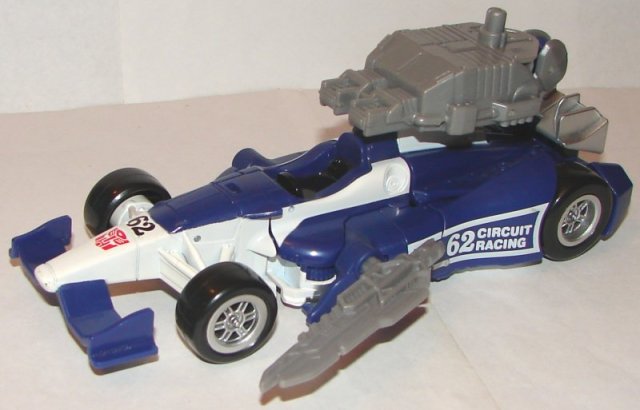 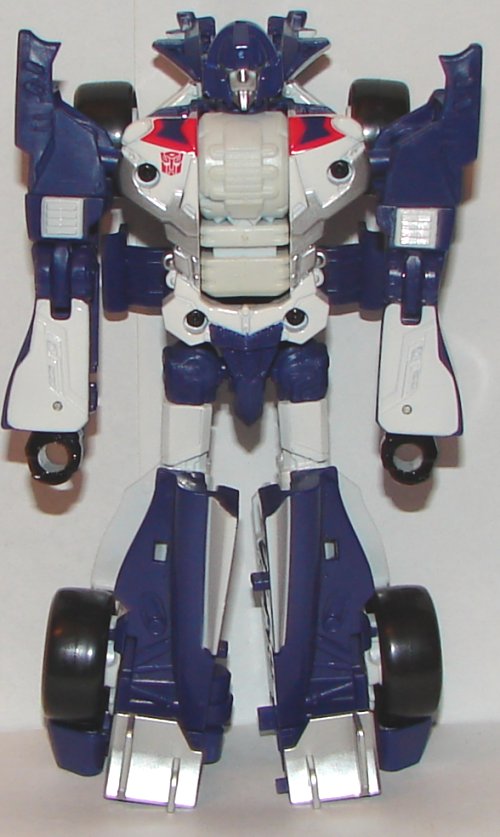 Unite Warrior’s Mirage’s is cast in darker blue plastic. The white striping on the back of the vehicle has been moved up behind the cockpit. On the sides of the vehicle they removed the white triangle above the words in favor of a box around the them. In robot mode his hands have been painted black, and he has new paint apps on his upper chest, but the best change is his combiner connector is now white to match the rest of his chest. Oddly, they failed to paint the sides of his face silver as they did on the Hasbro version, which is unfortunate. 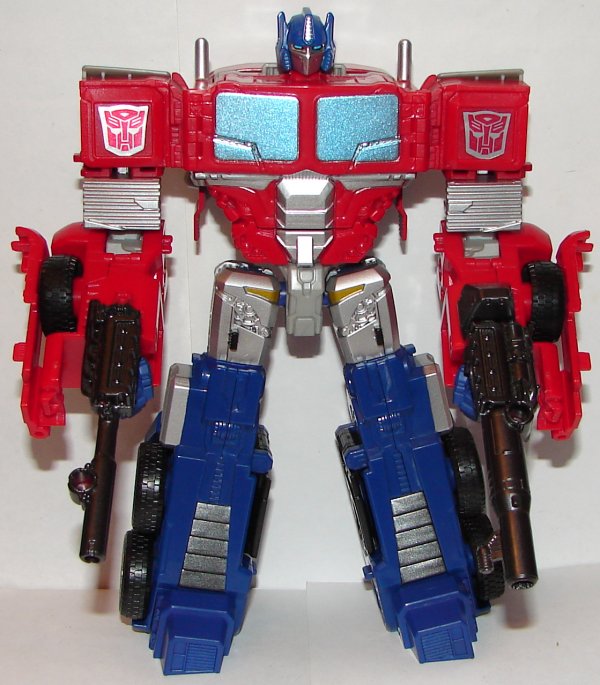 Unite Warriors Optimus Prime fixes a lot of the problems with the pain job on the Hasbro version. The front sides of his cab are red instead of gray, and his full grill and bumper is now silver rather than the nonsensical paintjob of the Hasbro version. They also painted his hubcaps silver which looks great. The panel behind the cab, which makes up his combiner waist, is now gray. That’s the one thing I prefer from the USA version. In robot mode Takara has corrected his gray feet, which made no sense, and made them blue as they should be. His gray plastic is now silver, and the sides of his abdomen are now red instead of silver. 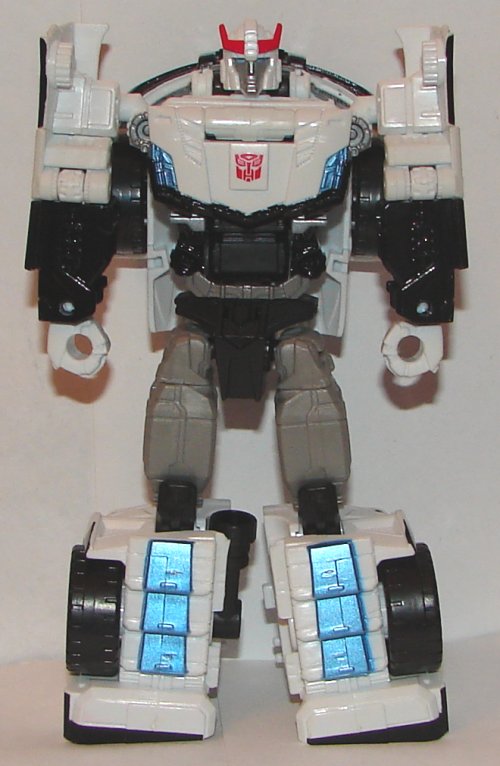 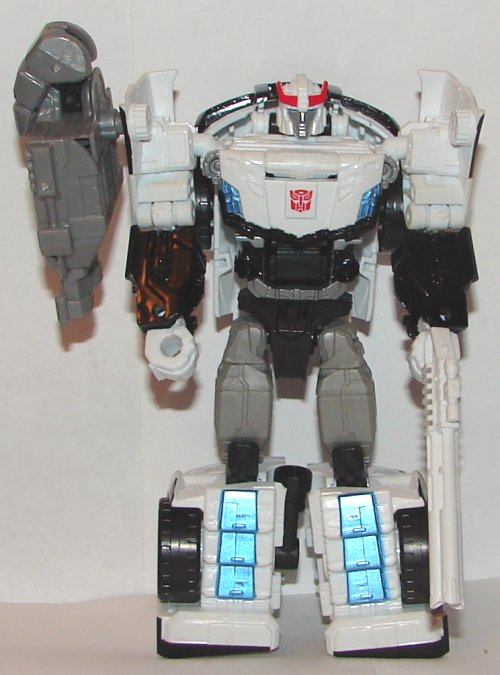 In vehicle mode, Unite Warrior’s Prowl has the police emblem added onto his hood, silver hubcaps, and a white strip in the middle of his light bar, all of which look great. However, somehow, both Hasbro and Takara managed to get the paintjob wrong. On the Hasbro version there is a black vertical stripe on the side. It doesn’t look bad, but didn’t really need to be there. I would have preferred the black stripe stay along the bottom side of the door. On the Takara version, this same part is white, which interrupts the striping along the bottom of the door completely. Of the two, I prefer the Hasbro, though either of them look quite right. Like Ironhide, we had to guess at his weapon placement in vehicle mode thanks to Hasbro’s ineptitude. The Takara instructions show the gun pointing backwards, which doesn’t make much sense, but at least it’s official. In robot mode, his hands are white, forearms black, and upper arms and shoulder white, almost opposite the Hasbro version except for his shoulders. They have reversed the colors of his legs and waist, and added a black stripe on his feet. His torso and chest is completely changed for the better. 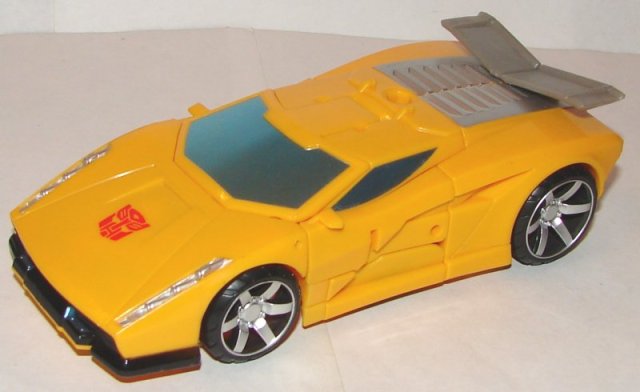 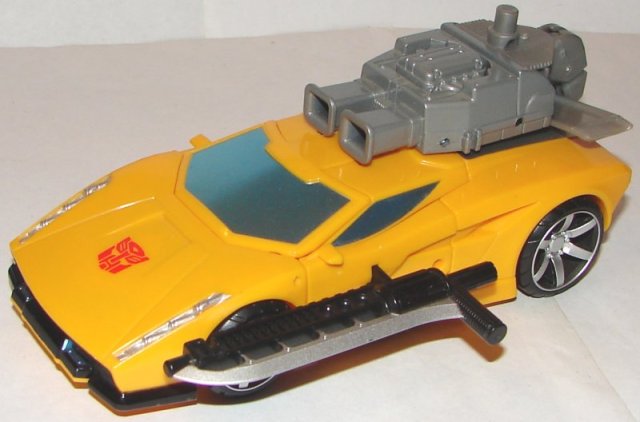 The single most improved toy in the set is Sunstreaker. The Unite Warrior’s version is a darker orange-yellow than Hasbro’s lemon yellow. The red and black striping has been removed from the sides of his car mode, and the rear window painted. In robot mode his gray and black legs are now all yellow-orange, which not only looks better, but is more G1 accurate. His chest has been completely repainted. Note, you can put the Hasbro version’s hand/foot/gun on his back, but I didn’t realize that when I took the picture of that one, which was quite a while ago now. Not sure if that’s even in Hasbro’s instructions.  As with Ironhide and Prowl, his weapon is put on pointing backwards in the instructions. 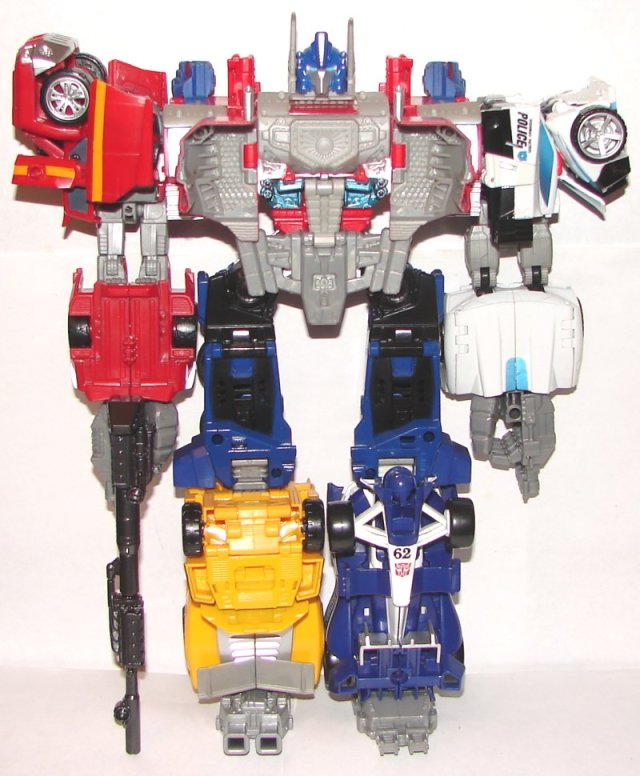 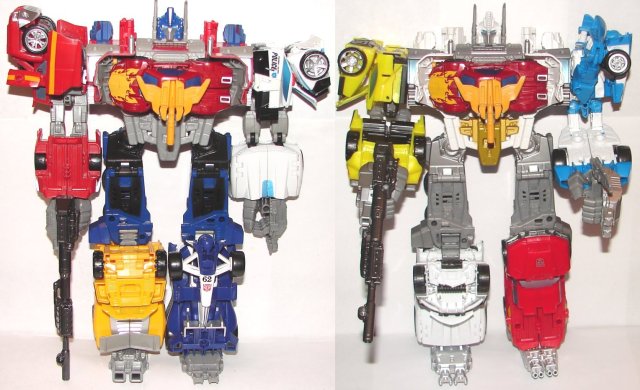 It’s hard to compare Convoy Grand Prime to Optimus Maximus, as they are completely different. I much prefer Takara’s way of building him with Ironhide and Prowl as the arms. I also took a photo of him with a USA Rodimus on his chest. I actually like the look of that, but it’s not official as Rodimus was never released in Japan.

Overall: This is a great set. While there are a few odd choices, each toy is overall better than their Hasbro counterpart. I really wish I’d bought this one when it came out. Now I just need a Unite Warrior’s Menasor to complete the whole line.

I’m 36 years old, and I work in network tech support for a public school system. I am a huge fan of Star Trek, Transformers, Harry Potter, and Marvel Comics as well as numerous other fandoms. I’m a big sports fan, especially the Boston Red Sox and the New England Patriots. I collect toys (mostly Transformers but other stuff too), comic books, and Red Sox baseball cards. I watch an obscene amount of television and love going to the movies. I am hopelessly addicted to Wizard Rock and I write Harry Potter Fanfiction, though these days I am working on a couple of different original YA novels.
View all posts by lmb3 →
This entry was posted in Toy Reviews, Toys, Transformers and tagged Autobots, Battle Core Optimus Prime, Combiner Wars, Convoy Grand Prime, Generations, Ironhide, Mirage, Optimus Prime, Prowl, Sunstreaker, Toys, Transformers, Transformers Generations. Bookmark the permalink.