Before I get to my Bot Shots review, I must ask a question.  WTF Hasbro!

The brilliant minds at Hasbro pulled off yet another in a string of brilliantly idiotic decisions.  Things seemed to be going pretty well at Hasbro up through the Revenge of the Fallen line.  Toys were good, mostly findable, with a few exceptions, such as the Deluxe Red Rampage and Deluxe Evac, but it’s not uncommon for tail end toys in a line to be hard to find.  Unfortunately things have gone down hill from there.

The first real inkling of things going down hill was with the RPM line early in 2010.  No one could find the later shipments in stores.  I ended up getting mine from over seas.  The line was being re-launched as Speed Stars, so at the time, I didn’t think much of it, but some of the toys in the RPM line were never released at all.

Next came the Transformers 2010 line, which we patiently waited for all summer, while no new product ended up on shelves.  Once the line finally started trickling out, it saw piss poor distribution.  First series toys were shipped in huge numbers, and when they didn’t sell out, later series were anywhere from hard to damn near impossible to find.  I never saw any Power Core Combiner 2-Packs beyond series 1 at any TRU (until recently).  Some I have never saw in any store ever.  (By sheer dumb luck I found a Constructicons and Dinobts set at a Wal-Mart.)  Of course, most famously, the last series of Scouts was canceled with Frenzy and Rumble, and Windcharger only showed up at Five Below stores in the USA long after the line was ended.  During this same time, there were NO toys at all for Transformers Prime.  Also, Speed Stars stopped shipping leaving incomplete series of the toys…again.  All in all, 2010 was a cluster f**k at Hasbro.

So, then comes 2011 and Dark of the Moon comes along.  As of now, more than six months after the movie came out, we still have not seen deluxe toys of key characters like Wheeljack (Queue), Mirage, or Soundwave, in addition to some toys at other price points.  The Speed Stars line was re-launched again for DotM, and some of those toys have still never shown up on shelves.  I just recently purchased some of the Speed Stars Stealth Force toys from the UK.  I have no idea what to think at this point about DotM.  Is the line over?  Will we never see the toys I listed as well as others such as Human Alliance Soundwave?  No one knows.

Oh, and let’s not even get started on Kre-O.

Now, we move on to Hasbro’s latest bonehead move.  The Transformers Prime First Edition line was (apparently) a placeholder to finally get some toys out for TF Prime (a year late) before the real TF Prime RID line launches.  Deluxe toys showed up at my TRU once, and now we get word that Hasbro has canceled the line entirely.  Initially, I wasn’t all that upset.  I mean, really, Hasbro couldn’t possibly have made all these brand new molds for us to never get them at all, right?  Wrong.  Apparently, the TF Prime RID toys are all new molds, not using anything from the First Edition line.  I just spent a boatload of money this week to get the toys from Canada.  I don’t know how such a big company like Hasbro can have one of its biggest properties so badly mismanaged.

Toy Fair 2012 is this month.  Hopefully after that we will have some idea what Hasbro is doing this year (assuming they even know).  I’ve probably forgot some of the stupid things they’ve done.  I can only hope it gets better.  It certainly can’t get any worse.

This week I picked up the first of Hasbro’s Transformers line for 2012.  I’m not sure what to call it.  These toys just say “Transformers” on the packages, so it remains to be seen if this should be considered Transformers 2012, or Transformers Robots in Disguise.  Maybe this will even be something separate.  In any case, Bot Shots is ignominious beginning to the line.  Essentially, Hasbro has created a Rock, Paper, Scissors Transformers game. 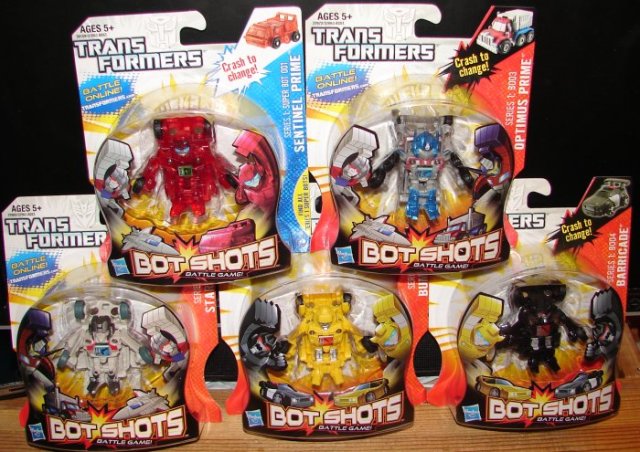 In a nutshell, these toys are about the size of G1 Mini Cars, and pop up into robot mode when they are crashed together.  They aren’t horrible looking, but they are fairly pathetic in design.  Optimus, Starscream, Bumblebee, and barricade look okay, nothing special, but not terrible.  Each series will have a short packed “chase” toy with slightly different packaging.  This one is Sentinel Prime.  He’s molded entirely in translucent red plastic.  I *assume* that the clear plastic will be a recurring theme for the chase figures.  The only paint apps on him are on the robot face.  Maybe some more paint apps would make it look better.

On the bottom of each vehicle (the robot’s chest) is a three-sided revolving piece with three logos on it, a fist, a gun, and a sword.  Each also has a number.  To play the game, you need two toys.  Each player sets either fist, gun, or sword, and they crash them together and when they pop up, you have a winner.  Gun defeats fist, fist defeats sword, or and sword defeats gun.  Each toy has a number value assigned to each weapon, and in the vent that both players have selected the same weapon, the higher value wins.

Now, here’s my first problem.  With rock, paper, scissors, there is at least some reason in it.  Scissors cut paper.  That makes sense.  Rock smashes scissors.  Also logical.  Paper covers rock, okay, I’ll buy that.  Now for the TF version, I’ll buy gun defeats fist, but I’ll take a sword over a fist any day, and a gun over a sword just as often.  As far as the numbers, who cares?  It could just as easily been left that if there is a tie you go again.

This is one of the dumbest concepts Hasbro has ever done, possibly their worst idea ever (and that’s really saying something).  What they should have done is make which symbol shows up random, rather than having to be set by the players.  At least then it would have had an element of randomness to it.

On the plus side, at $5 each, they aren’t so expensive as to really piss off a completist like myself who will buy them even though they are crap.  That might be their most redeeming quality.

I don’t want this entire blog to be a downer, so here’s a Transformers Artifact of the Week. 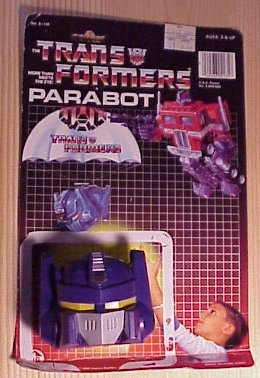 Here we have a 1984 Parabot by HG Toys.  Unfortunately, mine is missing the bubble, but the toy itself is in mint condition.  It’s a very cool item.  As always you can see this and over 7500 other items at TFMuseum.com.

I’m 36 years old, and I work in network tech support for a public school system. I am a huge fan of Star Trek, Transformers, Harry Potter, and Marvel Comics as well as numerous other fandoms. I’m a big sports fan, especially the Boston Red Sox and the New England Patriots. I collect toys (mostly Transformers but other stuff too), comic books, and Red Sox baseball cards. I watch an obscene amount of television and love going to the movies. I am hopelessly addicted to Wizard Rock and I write Harry Potter Fanfiction, though these days I am working on a couple of different original YA novels.
View all posts by lmb3 →
This entry was posted in Toy Reviews, Toys, Transformers, Transformers Artifact of the Week and tagged Bot Shots, Hasbro, Toys, Transformers. Bookmark the permalink.