I picked up some more Transformers Bot Shots today.  I’m not going to rehash my opinions of the concept as a whole.  Those can be found in a previous blog.

I kind of like these.  The trailers are pretty cool, though it would have been nice if the weapons were spring loaded to deploy when you press the button to open it up.  The Megatron trailer connects more firmly to the vehicle.  The Optimus Prime trailer will come off pretty easily if you shake it.

Optimus Prime has darker blue and lighter red than the single pack version.  The mold seems identical to the single pack.  This is the first version of the Megatron tank.

I guess it adds a little bit to the Bot Shot play value to have a launcher for the toys.  Not much though, and it can’t overcome fist beats sword and sword beats gun. 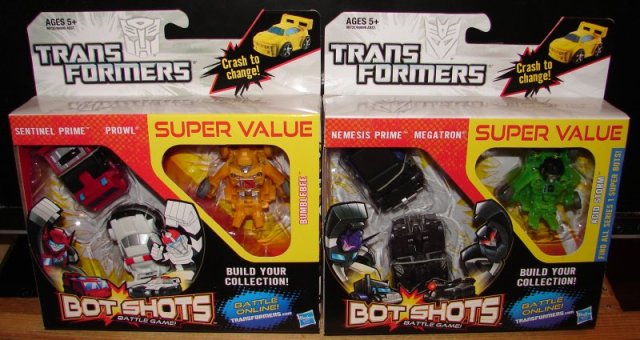 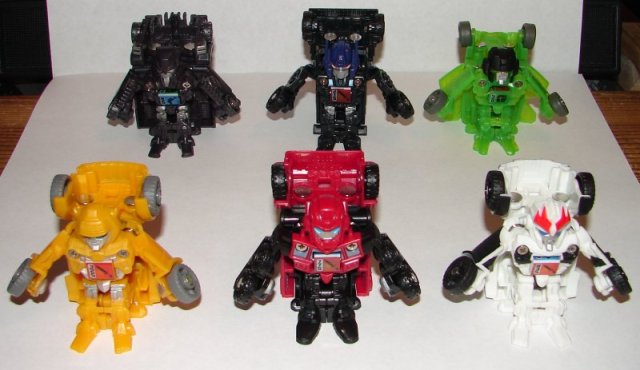 These are all repaints of previously released toys.

Bumblebee is a darker yellow than the single pack version.

Sentinel Prime was previously released as a chase “Super Bot”.  He looks much better in full color.

Prowl is a repaint of Barricade.  Nice, but the smirk doesn’t really fit Prowl.

Megatron is a mostly black and silver repaint of the Launcher version of Megatron.  I would have liked a silver G1 colored one, but that might be in a later wave.

Nemesis Prime is a mostly black repaint of Optimus Prime.  They left his head blue.  It would have looked better in black.

Acid Storm is the interesting one.  They repainted the Starscream mold into translucent green.  Now, as a “Super Bot” he is supposed to be rare.  I didn’t realize he was a “Super Bot” until I got home, so I didn’t get a chance to check and see if the set was actually short packed compared to the Autobot set.  If it is, it’s silly that he is supposed to be rare, when all three toys in the set are the same rareness.  If it’s not short packed, then he’s a “Super Bot” who is not actually rare.  Either way, it’s kind of silly.  I would have preferred a non “Super Bot” Acid Storm.

However, Acid Storm does give us a small glimpse into Hasbro’s short-term plans for the line.  He is numbered Super Bot 006.  Hasbro has announced a total of five series of the single packs, each containing a “Super Bot”.  I don’t know if we will see anymore 3-Packs, but I guess at least for the moment, five series of single packs is all that is planned.  Somehow I have a feeling that’s going to be it for this line.

This is a Transformers PSP video game system case produced by Core Gamers in 2007.  It uses all Generation One art and logos.  Many of these items come in Autobot or Decepticon, but I’ve looked and have never been able to find a Decepticon version.  You can find pictures of this and 7500+ other items at TFMuseum.com.

I’m 36 years old, and I work in network tech support for a public school system. I am a huge fan of Star Trek, Transformers, Harry Potter, and Marvel Comics as well as numerous other fandoms. I’m a big sports fan, especially the Boston Red Sox and the New England Patriots. I collect toys (mostly Transformers but other stuff too), comic books, and Red Sox baseball cards. I watch an obscene amount of television and love going to the movies. I am hopelessly addicted to Wizard Rock and I write Harry Potter Fanfiction, though these days I am working on a couple of different original YA novels.
View all posts by lmb3 →
This entry was posted in Toy Reviews, Toys, Transformers, Transformers Artifact of the Week and tagged Bot Shots, Toys, Transformers. Bookmark the permalink.