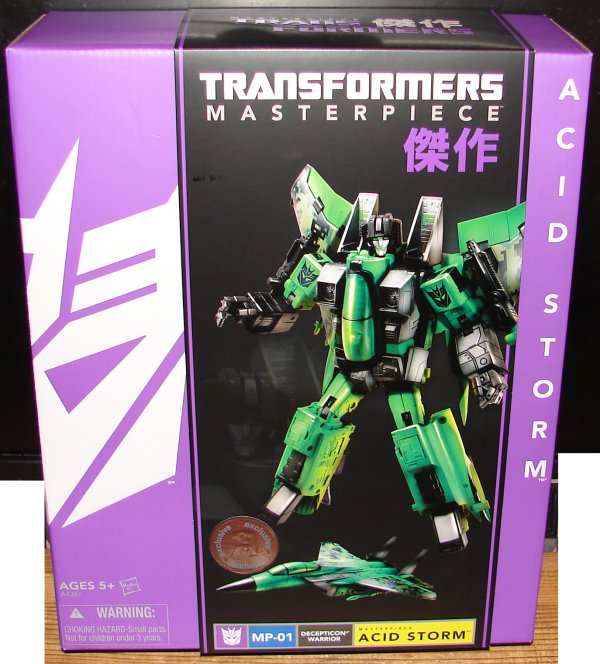 After nearly two weeks of going to Toy R Us every day, I finally managed to snag a Masterpiece Acid Storm.  I am not going to do a complete review of the mold, as I already did that with Starscream.  You can read that review here.  You can also read my review of Thundercracker here.

It is interesting to note that Acid Storm and Soundwave have been given numbers MP-1 and MP-2.  This make me wonder if more Masterpiece releases are being planned. 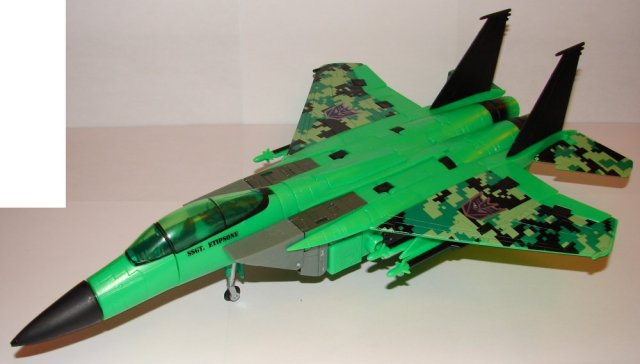 Like Thundercracker, Acid Storm includes the base and missiles that were left out of the Japanese Starscream MP-11.  I’m not sure what to make of the names on the sides of the cockpit.  While I do love the green color, I’m not crazy about the pixilated camouflage on his wings.  Regular camouflage would have looked much better in my opinion.  Still, the camouflage aside, he’s a fantastic looking toy, and if I’m not mistaken, the only Masterpiece toy yet to see release in the USA before Japan (if it ever gets released in Japan).  I’m still a bit disappointed that we didn’t get Sunstorm.

I’m 36 years old, and I work in network tech support for a public school system. I am a huge fan of Star Trek, Transformers, Harry Potter, and Marvel Comics as well as numerous other fandoms. I’m a big sports fan, especially the Boston Red Sox and the New England Patriots. I collect toys (mostly Transformers but other stuff too), comic books, and Red Sox baseball cards. I watch an obscene amount of television and love going to the movies. I am hopelessly addicted to Wizard Rock and I write Harry Potter Fanfiction, though these days I am working on a couple of different original YA novels.
View all posts by lmb3 →
This entry was posted in Toy Reviews, Toys, Transformers and tagged Acid Storm, Masterpiece, Toys, Toys R Us, Transformers. Bookmark the permalink.