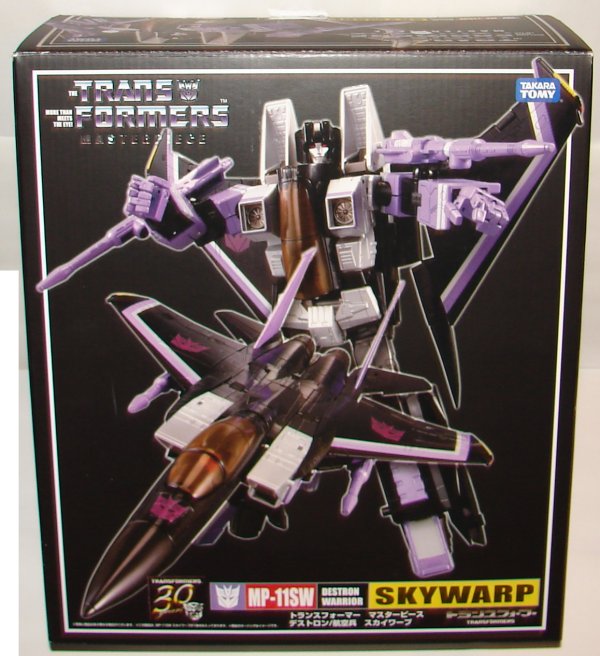 I’m not going to bother go over the mold as I have done so before.  For more info please see my previous reviews of Masterpiece Starscream (Japanese), Masterpiece Thundercracker, Masterpiece Acid Storm, and Masterpiece Sunstorm (USA TRU Version).  I’m only going to talk about his colors.

As with previous Masterpiece releases, Skywarp has a coin available.

Skywarp comes with Megatron in gun mode, as has been included with a whole bunch of MP releases.  Kind of crazy how many times Megatron has been included.  Also included is Dr. Archeville. I can’t recall him ever having his lab coat painted before, so that’s pretty cool.

It sucks that we have to import him from Asia at a ridiculous $200, but at last we have the full set of Starscream, Thundercracker, and Skywarp in the new Masterpiece Starscream mold.  Previously Skywarp had only been released in the original MP Starscream mold.  Skywarp looks awesome.  His colors are perfect in both modes.  He’s just fantastic.  One interesting thing, the most recent releases of this mold have all had very loose rear horizontal stabilizers.  They would fall off if you look at them funny.  Skywarp’s horizontal stabilizers are nice and tight.  Not sure if it’s the type of plastic, color of plastic (since some color plastics are just softer it seems, I don’t know why) or a change to the mold, but it’s nice to not have them falling off.

Overall: Even at $200, he’s worth it to complete the set in the more accurate remold.  He’s a must have.  Now if we can just get them to remold this into Thrust, Dirge, and Ramjet.

I’m 36 years old, and I work in network tech support for a public school system. I am a huge fan of Star Trek, Transformers, Harry Potter, and Marvel Comics as well as numerous other fandoms. I’m a big sports fan, especially the Boston Red Sox and the New England Patriots. I collect toys (mostly Transformers but other stuff too), comic books, and Red Sox baseball cards. I watch an obscene amount of television and love going to the movies. I am hopelessly addicted to Wizard Rock and I write Harry Potter Fanfiction, though these days I am working on a couple of different original YA novels.
View all posts by lmb3 →
This entry was posted in Toy Reviews, Toys, Transformers and tagged Masterpiece, Masterpiece Skywarp, Skywarp, Toys, Transformers, Transformers Masterpiece. Bookmark the permalink.