I got my MP-10 Masterpiece Optimus Prime and Amazon.com Unicron in the mail just a couple of days apart.  I’m sure many people will do detailed comparisons between the older and newer versions of these toys, so I only have a few comments on each. 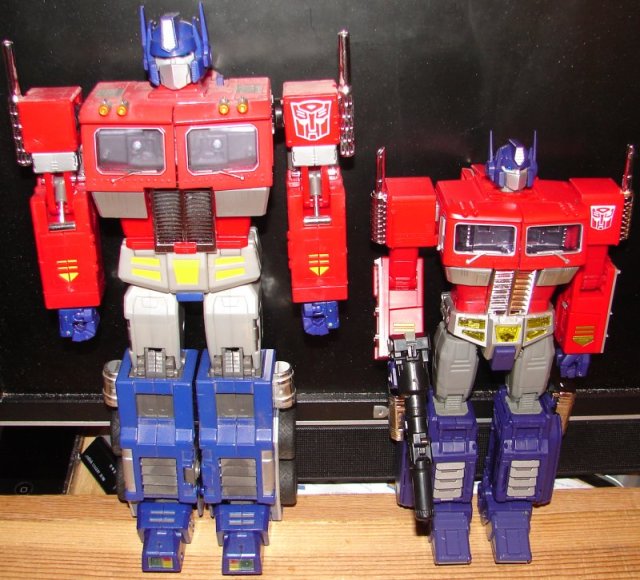 I love the new Prime.  I like it better than the original Masterpiece Prime.  This one isn’t so heavy that it’s hard to transform, and I like the look of it better.  It actually has larger fuel tanks than the original.  I always thought they were too small.

While some things are less detailed (the lights on top of the cab) the new version actually has rear view mirrors, which is nice.  The new one also has a nicer head sculpt.

My only real complaint about the new version is the eyes.  The original has the translucent blue plastic eyes so they light up through the back.  The new one just has black plastic eyes.

So, how long until we get the black, white, and dead versions?

Not much to say about Amazon.com Unicron.  I haven’t got it out of the box.  I do like the new paint job, and it uses the new head sculpt from the most recent Japanese release.  The renaming of his Mini-Con to Kranix is the best thing about it.  I’m getting a little tired of repainting or re-releasing this thing every few years.

The only real noteworthy thing about Unicron is that his instructions have the Dark of the Moon logo, while the box is clearly the Transformers 2010/Generations design.  I can only assume it was original planned for the DotM line.  Either that, or someone screwed up.

The Transformers ArtifactS of the Week:

Transformers Pop-A-Point Pencils and Crayons made by Spindex Corporation in 1985.  These are some of the many school supplies/art items from the glory days when they would stick the TF logo on almost anything.  I miss those days.

I don’t see many of these on card anymore, but used to see them a lot loose at flea markets.  Haven’t seen any in a long time.

You can find these and over 7000 other items at TFMuseum.com.

I’m 36 years old, and I work in network tech support for a public school system. I am a huge fan of Star Trek, Transformers, Harry Potter, and Marvel Comics as well as numerous other fandoms. I’m a big sports fan, especially the Boston Red Sox and the New England Patriots. I collect toys (mostly Transformers but other stuff too), comic books, and Red Sox baseball cards. I watch an obscene amount of television and love going to the movies. I am hopelessly addicted to Wizard Rock and I write Harry Potter Fanfiction, though these days I am working on a couple of different original YA novels.
View all posts by lmb3 →
This entry was posted in Toy Reviews, Toys, Transformers, Transformers Artifact of the Week and tagged Amazon Unicron, Amazon.com Unicron, Books, Masterpiece Optimus Prime, MP-10, Unicron. Bookmark the permalink.