Titan Master: At least they painted his face in robot mode.  The Scourge head sculpt is excellent, and they even put the gun on his head, albeit smaller than it should be.  The Japanese version has his arms gray instead of blue so his head does not look so enormous.  Hasbro’s version of course does not. 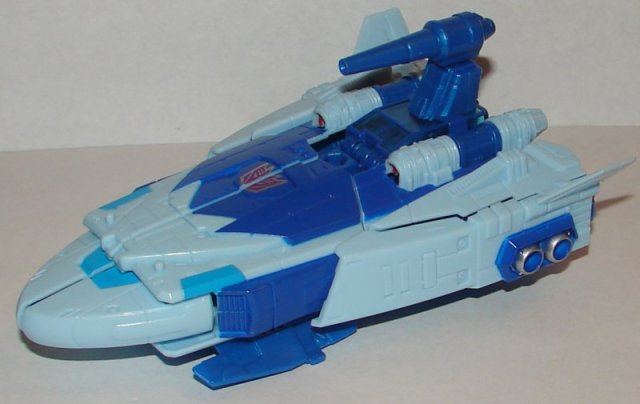 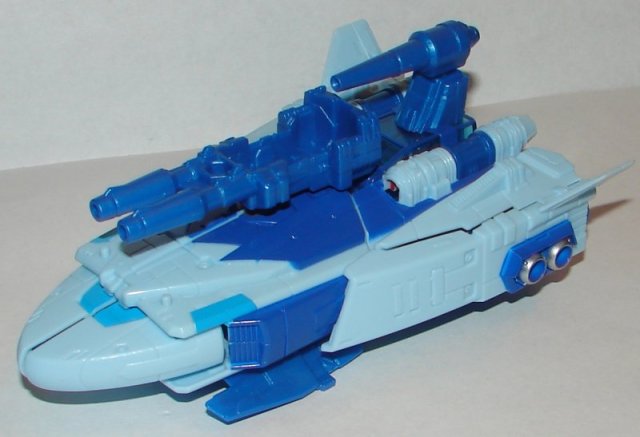 Vehicle Mode: Scourge’s vehicle mode is pretty much perfect.  About the only complaint I have is that the panels that become the front of his legs really should have folded up different on the bottom of the vehicle so you couldn’t see them sticking out, but that’s not a major issue.

Robot Mode: In robot mode, much like Blurr, Scourge is…blue.  No, I don’t mean he’s feeling down, the way these two toys make me feel.  He’s just fucking blue.  It’s deplorable that Hasbro could fail to paint such a beautiful mold.

A friend of mine sent me the above picture of a Scourge found at a Walmart without any paint apps on his chest.  I have not seen this reported on any of the Transformers news sights, so it may just be an isolated quality control problem.  Time will tell. 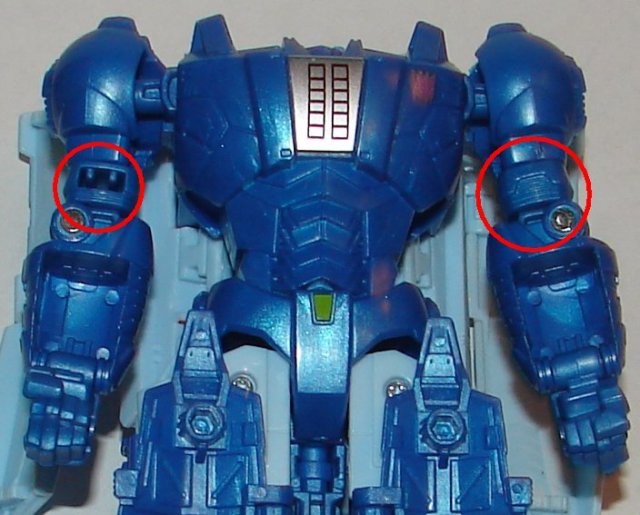 This one I found myself.  When I was transforming my Scourge I discovered that he had two right bicep.  When his arms are turned palms out his right bicep (on the left in the picture to be clear) shows a rectangular port that connects to a peg when in vehicle mode.  His left arm (on the right) does not show one.  This is because my Scourge has two right biceps.  He can still be transformed to vehicle mode, you just spin his left arm around 180 degrees, and it almost fits onto the peg, but is close enough for the wing to fold down over it.  This could be a random QC problem, but this kind of variation has happened before. 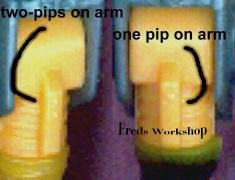 What is in that picture (which is from FredsWorkshop.com, which I run for Fred) are the upper arms of Beast Machines Deluxe Jetstorm.  For some unknown reason, he had one little bump, or pip, on one arm, and two on the other.  We don’t know which one was meant to be on which arm as they were interchangeable.  This created FOUR different versions.  One on the left and one on the right, two on the left and two on the right, one on the left and two on the right, and two on the left and one on the right.  Now we don’t yet know whether this Scourge bicep issue is widespread enough to be a variation.  Time will tell.  Now, if, and it’s a big if, the missing paint on the chest is a widespread variation also, then there could be in theory a total of eight different versions of Scourge.  This was the case with Beast Machines Jetstorm as he had a second variation to the molding on his knee.  If you’re feeling sorry that you know any of this, you’re not as sorry as I am.  The Jetstorm mold was used four more times for Beast Machines Sonic Attack Jet, Robots in Diguise Storm Jet, Armada Jhiaxus, and Universe Skywarp.  All had the shoulder variation, so including Jetstorm’s knees there are twenty-four variations of that mold.  Yes, I do in fact have all twenty-four, and I swear it’s not a cry for help. 🙂

Overall: What could have been an amazing toy, the issue of him being unnecessarily a Titan Master aside, is ruined by a shitty paint job, or lack of a paint job.  It is better than Blurr, as Blurr is missing needed paint apps in vehicle mode, and Scourge’s vehicle mode is not, but that’s small consolation.  Way to go Hasbro, you screwed it up again.  I say skip this one and wait for the Takara version.  It will be a million times better.