I wondered if Hasbro would find another use for the Studio Series Leader Class Jetfire mold. Regrettably, they did.

X-Spanse comes with small figures of Sabertooth and Wolverine. I assume these are not new molds, but I don’t buy much X-Men stuff, so I don’t know for sure. A pink clip is included that can go around one of the figures waist. Not sure why. 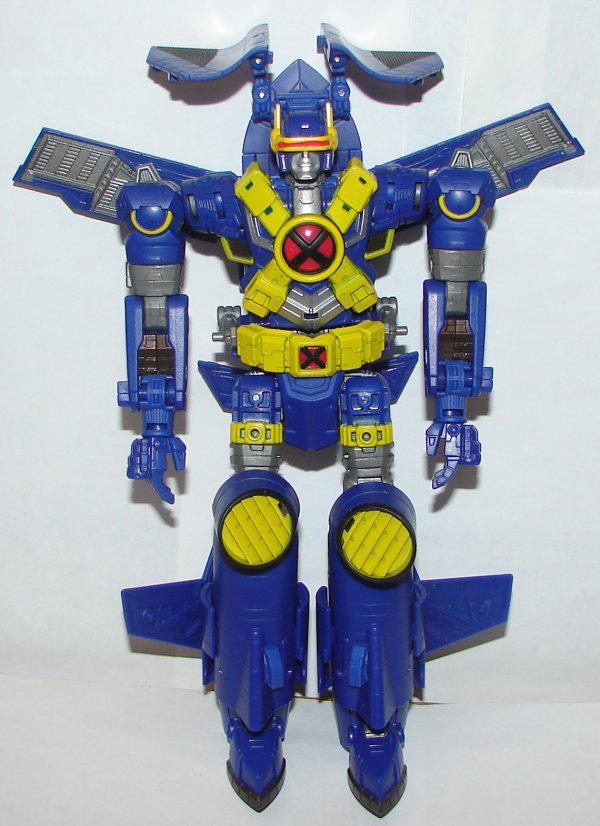 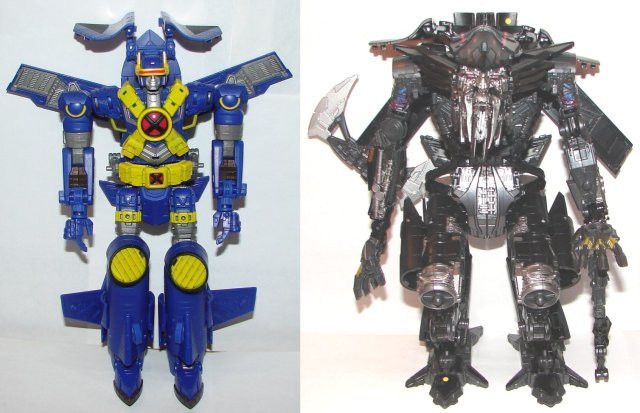 The X-Men’s Blackbird has had many incarnations in various series, but most incarnations resembled a modified SR-71 Blackbird, hence the name. Amazingly, in vehicle mode the modifications have made it a better toy. There are far fewer robot parts hanging down under the fuselage. The front of the turbines have also been modified. The Blackbird transforms into Cyclops. He has two platforms behind his head that the figures can stand on, but there is no way to secure them. He has a blast effect for one hand, and Wolverine’s claw on the other. He looks very cool, but has a major design flaw. First off, he cant stand up worth a damn. Second, his upper body is loose. It won’t disconnect, the top and bottom are both secured to the back, but his upper body flops around when you move him. Third, the ports on his hands are too small for the blast affects (or the blast affects are too big). They barely go in, but do stay in place since it’s such a tight fit.

Overall: X-Spanse looks cool in both modes, and if that’s all you want from him, then he’s great. I was expecting more somehow, especially with the $60 price tag.

I’m 36 years old, and I work in network tech support for a public school system. I am a huge fan of Star Trek, Transformers, Harry Potter, and Marvel Comics as well as numerous other fandoms. I’m a big sports fan, especially the Boston Red Sox and the New England Patriots. I collect toys (mostly Transformers but other stuff too), comic books, and Red Sox baseball cards. I watch an obscene amount of television and love going to the movies. I am hopelessly addicted to Wizard Rock and I write Harry Potter Fanfiction, though these days I am working on a couple of different original YA novels.
View all posts by lmb3 →
This entry was posted in Toy Reviews, Toys, Transformers and tagged Sabertooth, Toys, Transformers, Ultimate X-Spanse, Wolverine, X-Men, X-Spanse. Bookmark the permalink.