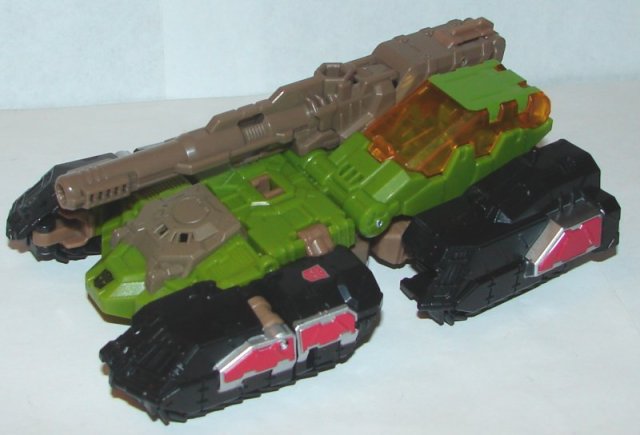 Hardhead is a significant improvement over his previous paintjobs. They added the silver and red apps to his treads. His G1 had similar stickers. They also painted the top of his cockpit. The original only had a small window. This one looks much better with those additional apps. All his other color changes make him more G1.

Overall: If you have this mold and aren’t a completist, then you can probably skip Hardhead, unless you just want to display him in the awesome box. If toy accuracy matters to you, you just love the upgraded color scheme, or if you don’t have Hardhead, this is a great opportunity to pick him up for $20.

I’m 36 years old, and I work in network tech support for a public school system. I am a huge fan of Star Trek, Transformers, Harry Potter, and Marvel Comics as well as numerous other fandoms. I’m a big sports fan, especially the Boston Red Sox and the New England Patriots. I collect toys (mostly Transformers but other stuff too), comic books, and Red Sox baseball cards. I watch an obscene amount of television and love going to the movies. I am hopelessly addicted to Wizard Rock and I write Harry Potter Fanfiction, though these days I am working on a couple of different original YA novels.
View all posts by lmb3 →
This entry was posted in Toy Reviews, Toys, Transformers and tagged Generations, Hardhead, Hascon, Retro Headmasters, Toys, Transformers, Transformers Generations, Transformers Generations Retro Headmasters. Bookmark the permalink.