Since Transformers and Ghostbusters just happened to debut in the same year, they are getting a crossover in the forms of a repaint of Masterpiece Optimus Prime at Sand Diego Comic Con, and this transforming Ecto-1 called Ectotron. Yeah, I don’t get it either. 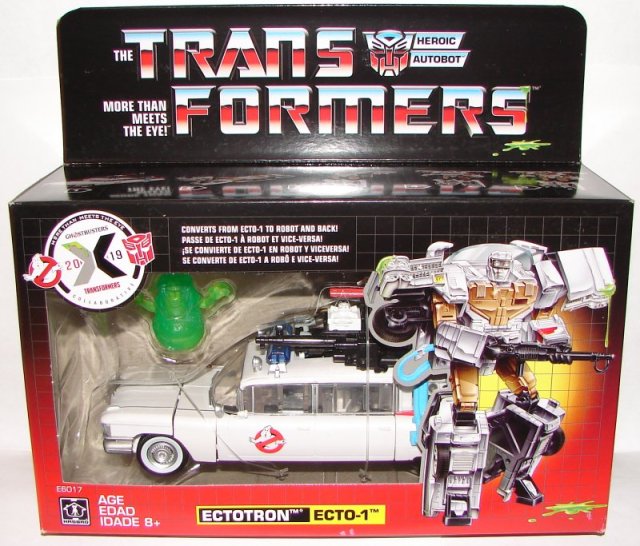 I don’t usually talk a lot about the boxes toys come in, but damn this looks incredible! I love G1 box flaps! Ectotron looks so much cooler in the box with the flap than it would without the flap. They added just a splash of ectoplasm to the last S in Transformers. I really like his box art, and the back of the box sports the original 1984 box back art. Of course, his tech spec is ruined by only having a few lines since it has to appear in four languages. I hate multilingual packaging.

Slimer doesn’t look great. He’s just cast in translucent green soft plastic, so while his face is molded on, you can’t see it very well in the photo. I would have preferred they give us an opaque green Slimer whose face would stand out.

Vehicle Mode: I love Ghostbusters, but I’m far from a fanatic, so I wouldn’t notice if anything minor is amiss with Ecto-1’s design or paintjob. To me he looks amazing. I kind of want one in crazy G2 colors with the Ghostbusters 2 logo on it. 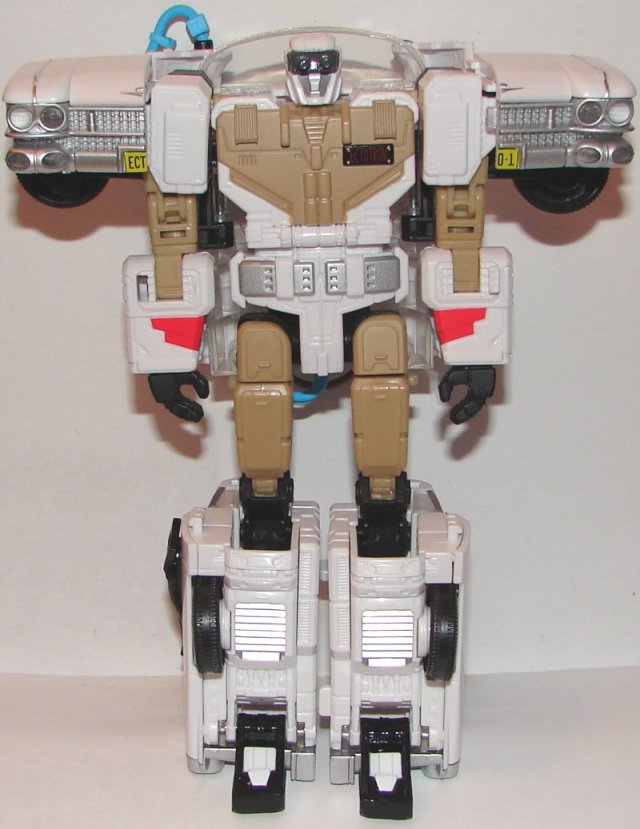 Robot Mode: I love Ectotron’s robot mode, but I do have a few small issues. First off, he has khaki coloring to simulate the Ghostbusters jumpsuits, but there is way too much white on him. He needed more of that color paint. The blue cord that connects to his ecto pack doesn’t stay in the back of the gun very well. I would have liked a better connection there. I wish his glasses (I guess that’s what they are) could be removed or pushed up on his head so you could really see his face, but they are stuck where they are. Lastly, I really wish he had an Autobot logo on his chest. Those items aside though, he looks awesome.

Overall: This toy is a must, if for no other reason than it’s unique. Crossovers almost never give us good transforming toys. He’s also kind of cheap at $50. I was expecting him to be way more than that when he was first announced.

I’m 36 years old, and I work in network tech support for a public school system. I am a huge fan of Star Trek, Transformers, Harry Potter, and Marvel Comics as well as numerous other fandoms. I’m a big sports fan, especially the Boston Red Sox and the New England Patriots. I collect toys (mostly Transformers but other stuff too), comic books, and Red Sox baseball cards. I watch an obscene amount of television and love going to the movies. I am hopelessly addicted to Wizard Rock and I write Harry Potter Fanfiction, though these days I am working on a couple of different original YA novels.
View all posts by lmb3 →
This entry was posted in Toy Reviews, Toys, Transformers and tagged 35th Anniversary, Ecto-1, Ectotron, Ghostbusters, Toys, Transformers. Bookmark the permalink.