Recently I discovered that the Buster Optimus Prime in the in this Jetpower 2-Pack had mold differences from any other version of this toy. (For a detailed history of the numerous mold changes to this mold, read my review of Movie The Best Leader Class Optimus Prime.) So, naturally, I had to track this down, much to the dismay of my wallet. (Seriously, I think I heard it crying.) This version differs from the original Hasbro ROTF Optimus Prime in that it includes the modified fuel tanks from the single pack Takara Buster Optimus Prime that turns into an Ion Blaster. This set also includes Revenge of the Fallen Jetfire, who I have never previously reviewed.

Vehicle Mode: When Jetfire came out nine years ago, I was so excited for this toy. I think the Lockheed SR-71 Blackbird is the most beautiful flying machine ever made. Then I got the toy, and I think Megatron summed it up best in Revenge of the Fallen, “So disappointing”. If you look at him from the top, he looks absolutely awesome. He’s perfect. Unfortunately, what he basically is, is the top of a Blackbird with a jumble of robot parts underneath. Transformers jets often suffer from kibble, which I totally get, but usually they try to hide it at least from the front. They didn’t even try to hide any of it. They could have at least made his arms fit inside the nose of the jet rather than underneath. That would have made a huge difference. It’s just impossible not to see all that robot hanging there. I would have been fine with more panels hanging off his robot mode f it meant his jet would have looked better. Also, if you look right below the points of his turbines, you can see the clips that he uses to attach to Optimus Prime just sticking out there. It really looks like they weren’t even trying. 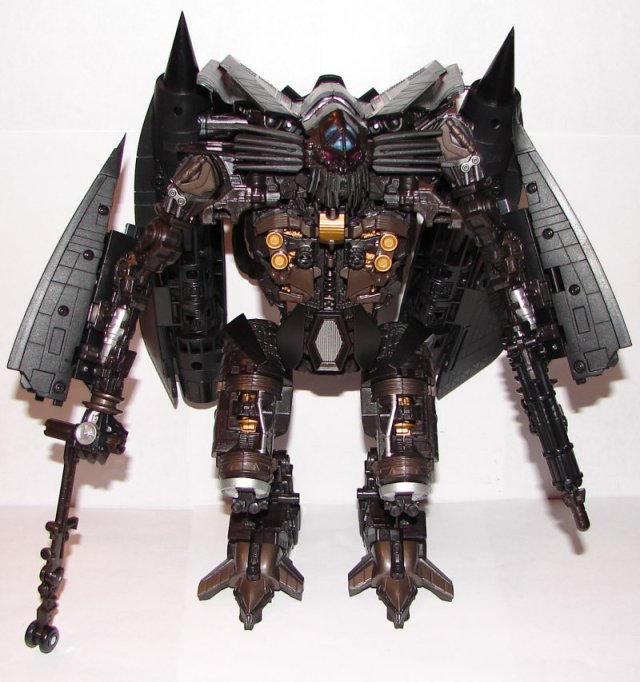 Robot Mode: In robot mode Jetfire actually looks pretty good. I love the cane, and they got his face perfect. This version is more screen accurate than the single boxed version (Hasbro or Takara) and it does look better without the blue and white plastic of the original. Other than the clips to attach him to Optimus Prime that hang off the sides of his chest, he has one major design flaw. His knee joints are not sufficient to properly stand him up. I hate the bent up legs so many movie toys have, but if his knee joints were stronger and ratcheting, it would work fine for Jetfire. Sad that such an obvious flaw was not corrected before it was released. 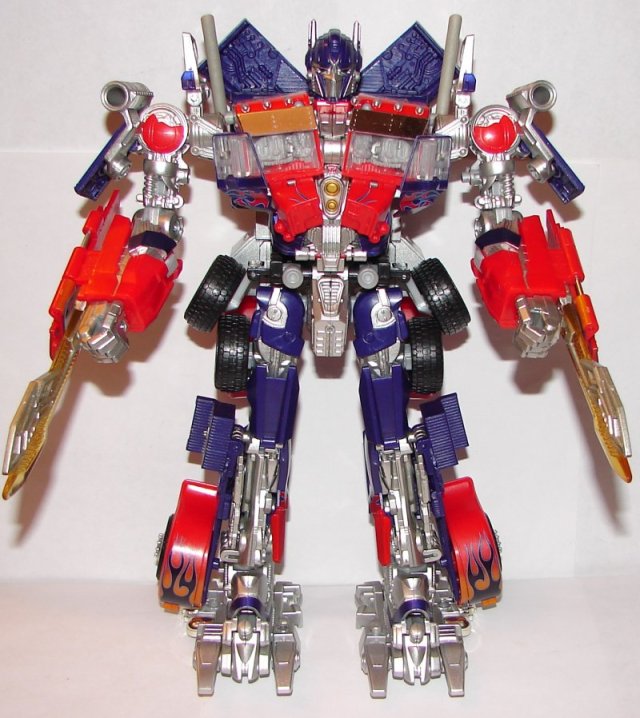 Way back in 2009, I was so disgusted with Revenge of the Fallen Jetfire that I never even bothered to combine him with Optimus Prime making this the first time I’ve ever seen them combined in person. Holy crap he looks awesome. I was concerned that he would be way too top heavy to stand, but the design took that into account connecting Jetfire’s legs to the back of Optimus Prime’s making him way more stable even than Optimus Prime even on his own. He really looks awesome. There are a couple of minor things that could be better. As you can see, Optimus Prime’s back panels unfold and have his fuel tanks attached to them. I would have loved if the turbines had attached to them to keep them in place. The arms that attach the turbines to Jetfire’s body are pretty flimsy, so they don’t really stay in place very well. Similarly, the wings (I guess that’s what they are) formed by the halves of Jetfire’s jet nose don’t want to align perfectly. They could also have connected to the turbines. Still, even with those issues, he looks amazing. Also of note, this uses the original Hasbro head, as opposed to the single pack which used a head with a mouth, but has far more paint apps than the Hasbro version.

Overall: These days this set is pretty expensive, though it was rereleased in Dark of the Moon packaging (with just a minor paint change on his Ion Blaster) which might be a little cheaper, but not much. I would say you would save a lot on the Move the Best toys, but this Optimus Prime paint job is vastly superior, so if you really want this toy, you’re going to have to shell out some serious money, but I really can’t recommend it enough.

I’m 36 years old, and I work in network tech support for a public school system. I am a huge fan of Star Trek, Transformers, Harry Potter, and Marvel Comics as well as numerous other fandoms. I’m a big sports fan, especially the Boston Red Sox and the New England Patriots. I collect toys (mostly Transformers but other stuff too), comic books, and Red Sox baseball cards. I watch an obscene amount of television and love going to the movies. I am hopelessly addicted to Wizard Rock and I write Harry Potter Fanfiction, though these days I am working on a couple of different original YA novels.
View all posts by lmb3 →
This entry was posted in Toy Reviews, Toys, Transformers and tagged Jetfire, Jetpower Optimus Prime, Optimus Prime, Revenge of the Fallen, Toys, Transformers, Transformers Revenge of the Fallen. Bookmark the permalink.