I never preordered this Optimus Prime thinking that the mold was identical to the original release. Since realizing this mold was unique, I have done some research on it, and cannot believe I didn’t realize just how many mold changes have been made to it over the years. This is my 9th version of this toy, so I’ve complied the details on all nine of them. If you want more details, please refer to TFWiki’s Optimus Prime Movie Toys page. That’s where I got the info, but there you need to sift through all the info on every of Optimus Prime movie toy. Note, there are also a number of repaints of this mold, but I’m not going to mention them here because they have no mold or accessory changes.

Revenge of the Fallen

Dark of the Moon

For Dark of the Moon, Takara extensively remolded this toy as Supreme Class Jetwing Optimus Prime. He got a new torso and elbows to more closely match his appearance in Dark of the Moon. His forearms were remolded to add ports. His Flip Out Battle Blades were removed completely. (Note, from here on, the flip out Battle Blades and Battle Hooks were never used again, at least not yet.) He uses the original head sculpt with the mouthplate. Also added was the Jetwing backpack which gave him the flight mode and cannons similar to the movie. (I haven’t watched it recently, not sure how accurate it is.) There was also a modification to his back so the backpack would stay on better. This toy was later repainted for release in the USA without any mold changes.

Later, Takara released a Leader Class Optimus Prime for Dark of the Moon. Striker Optimus Prime included all the modifications of Jetwing Optimus Prime, as well as additional ports for weapon storage. He does not include the Buster Optimus Prime fuel tanks/gun, but has new fuel tanks and weapons two weapons, Eliminator Gun and the Assault Blaster, which can combiner into the Mega Striker as well as a new shield that becomes a new front for his truck mode.

The Movie the Best Leader Class Optimus Prime Revenge Version sort of went back to the drawing board. The base mold is the original Revenge of the Fallen Optimus Prime with all the accessories from the first Movie the Best Optimus Prime, but he does have a couple of modifications. He uses the forearms from Jetwing Optimus Prime that do not include the flip out Battle Blades and has another new set of hands. This is an interesting one, as the hands he has were seen on the original Revenge of the Fallen Hasbro prototype, but were altered before the toy was produced.

In case you lost count, that is nine separate releases, no two of which have the same molding and accessories. I actually have 10 of this mold, because I bought the Japanese DOTM Jetwing Optimus Prime not knowing they would repaint it for the USA the following year, which I also got.

For a review of Movie The Best Leader Class Optimus Prime, you can read my review of the Asia Premium Series Optimus Prime Ultimate Edition. The paint job on this version is less dark than the Revenge Version pictured for comparrison. 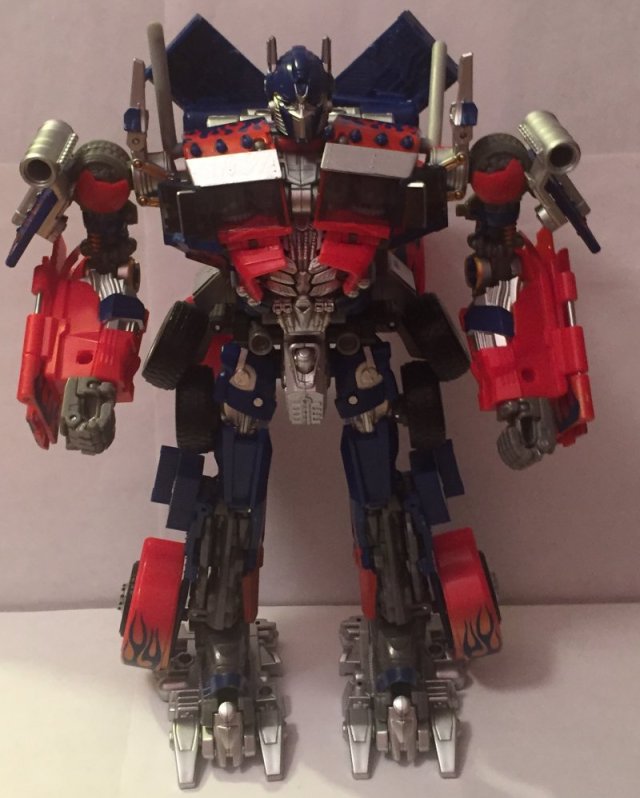 I’m 36 years old, and I work in network tech support for a public school system. I am a huge fan of Star Trek, Transformers, Harry Potter, and Marvel Comics as well as numerous other fandoms. I’m a big sports fan, especially the Boston Red Sox and the New England Patriots. I collect toys (mostly Transformers but other stuff too), comic books, and Red Sox baseball cards. I watch an obscene amount of television and love going to the movies. I am hopelessly addicted to Wizard Rock and I write Harry Potter Fanfiction, though these days I am working on a couple of different original YA novels.
View all posts by lmb3 →
This entry was posted in Toy Reviews, Toys, Transformers and tagged Dark of the Moon, Movie The Best, Optimus Prime, Revenge of the Fallen, Toys, Transformers, Transformers Dark of the Moon, Transformers Revenge of the Fallen, Transformers: Movie the Best. Bookmark the permalink.