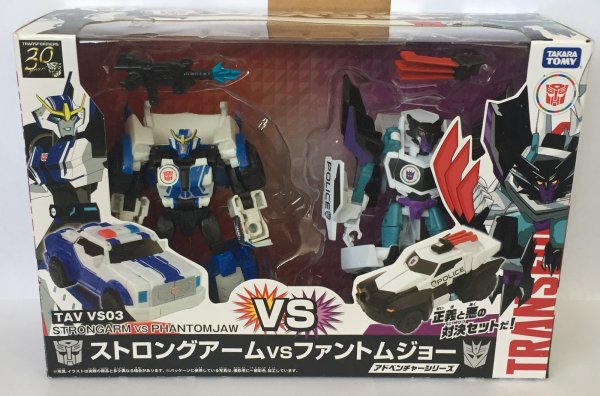 Read my reviews of the original Robots in Disguise Warrior Class Steeljaw, Strongarm, and Ratchet (remolded from Strongarm). 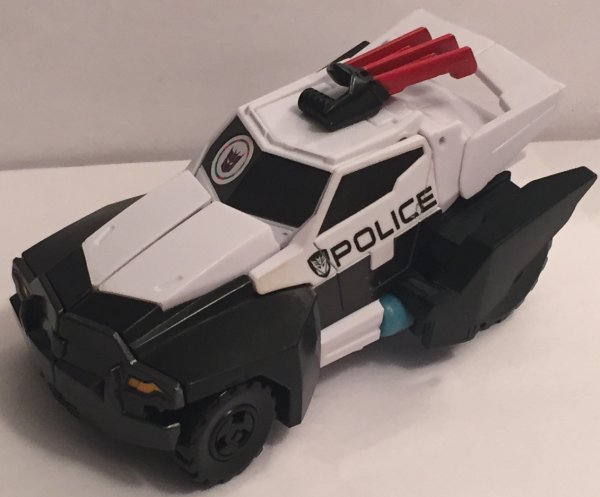 Strictly speaking, I didn’t need this set. I usually only buy the Japanese versions when there are mold changes to the USA toys. Both of these are the same as the USA versions (as far as I know). But I took one look at Phantomjaw and new I had to grab this set. His paintjob is awesome. He’s been turned into a police vehicle, which makes sense since Strongarm is one as well. His color scheme in robot mode is great. Steeljaw wasn’t a bad toy, but he had a pretty boring paint job. Phantomjaw is anything but boring. 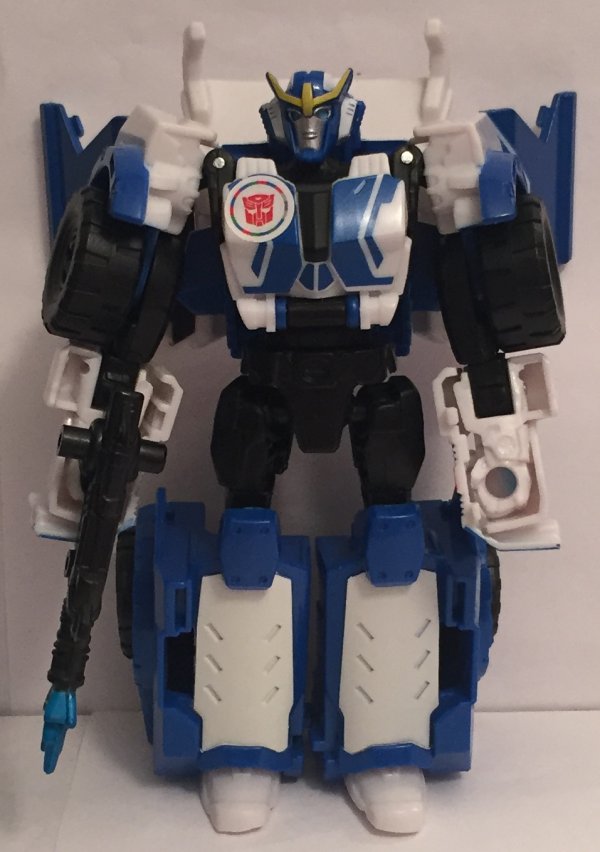 This version of Strongarm is in every way vastly superior to the Hasbro version. The paint apps are perfect. The Hasbro version looks like a knockoff beside it. This toy makes me really wonder why Takara agreed to unite the global brand and stop doing their own paintjobs apps on toys. Why after so many years would they decide to make their toys inferior? It’s got to be money, but Takara always seemed to care about doing toys correctly. Not sure what changed.

I’m 36 years old, and I work in network tech support for a public school system. I am a huge fan of Star Trek, Transformers, Harry Potter, and Marvel Comics as well as numerous other fandoms. I’m a big sports fan, especially the Boston Red Sox and the New England Patriots. I collect toys (mostly Transformers but other stuff too), comic books, and Red Sox baseball cards. I watch an obscene amount of television and love going to the movies. I am hopelessly addicted to Wizard Rock and I write Harry Potter Fanfiction, though these days I am working on a couple of different original YA novels.
View all posts by lmb3 →
This entry was posted in Toy Reviews, Toys, Transformers and tagged Phantomjaw, RID, Robots in Disguise, Steeljaw, Strongarm, Toys, Transformers, Transformers Adventures, Transformers: Robots in Disguise. Bookmark the permalink.