The Failure of Hasbro Customer Service to Actually Serve Their Customers

I hate Hasbro Customer Service. I made the mistake of actually seeing if they could help me with a problem recently and all I succeeded in was getting pissed off.

Just to state the obvious, everyone knows that big corporations like Hasbro don’t actually give a shit about their customers. Once they have our money, its no longer their problem. Nothing of this was surprising to me. I’m sure that there are some people at Hasbro who actually care about the customers. Problem is, they don’t really matter.

Back in June Hasbro started releasing the Toys R Us Exclusive Mission to Cybertron toys. There were seven toys in the series. Five of those toys contained a single trading card. The other two contained two training cards, those being the Optimus Prime Deluxe 2-Pack and Supreme Class Cybertron. Over the course of a few months the toys came out. As I got them, I just tossed the cards in a pile and didn’t really look at them. The cards are a puzzle, so there wasn’t much to do with them until I had the all to scan the picture.

The last toy to be released was Combiner Infernocus. I got him and then went to look at the trading cards and found that I had eight different cards and a duplicate. 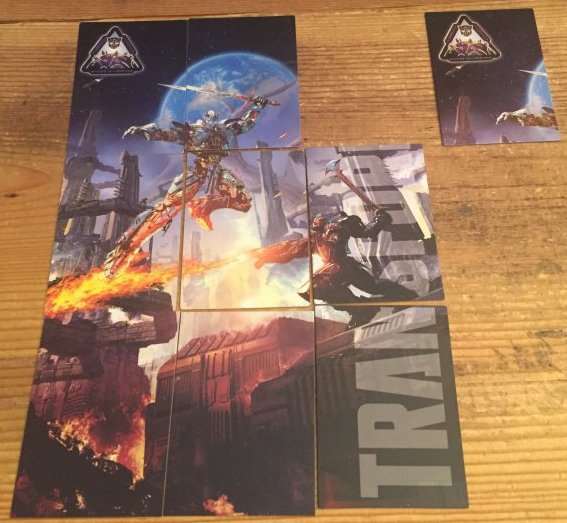 I watched a bunch of reviews online and found several that showed the cards that came with them. What I found was that one of the cards that came in the Optimus Prime Deluxe 2-Pack and Infernocus was the same card. I bought another Infernocus to check to see if it had the right card. It didn’t, so I returned it.

It’s not like I wouldn’t have bought the toys anyway, and I assumed that some moron printed the wrong card when Infernocus was manufactured and the right card didn’t exist. I knew the cards weren’t printed on the same sheet as some of them are on thin glossy stock while others are on thick matte stock. Talk about shitty quality.

The problem is, I couldn’t know that the right card wasn’t out there. That really pissed me off.

From previous interactions with Hasbro Customer Service, I know they do not stock store exclusives. This brings up the question of how a company can produce products that there customer service are unable to support, but even knowing this, I decided I would give them a try.

I contacted customer service through an online chat. Having never had a positive experience with Hasbro Customer Service (they should call it Hasbro Customer Disservice) I figured in a chat at least I wouldn’t end up yelling at them.

Long story short, the idiot in the chat said there was nothing they could do. About four different times I was offered a coupon to go away and stop bothering them (my interpretation). Literally, if you want a coupon, just call with a bogus complaint they “can’t” help with and they’ll offer you a coupon to get you off the phone.

What really irks me, is that I was reporting that one of their products was defective. Now, it wasn’t defective in a way that was dangerous. It is just defective in that it did not include everything it was supposed to. I can’t imagine there are that many people who bought Infernocus who even care. How many people are really buying all those repaints including the crazy overpriced Supreme Cybertron and crappy Legends repaints?

I was pretty pissed off after my online chat, so I filed a complaint against Hasbro with the Better Business Bureau on October 4th. I asked for help either obtaining the card or confirming that the card did not exist. I had no expectations it was going to get me anywhere, but it felt good to do something.

I did get a response. On October 13th, I received this.

Okay, so that seemed like there was a chance I might get somewhere. So, I did as instructed. I e-mailed the info, and then got this message back four days later.

So I waited. October 28th came and I got a message from the Better Business Bureau saying that my case had been closed because of inactivity. That’s when I started wondering if I’d been had.

The following week I sent Kriss a message asking if there was any progress. This is what I got back the next day.

Didn’t even offer me a coupon, and I bet Kriss would never have bothered to respond at all if I hadn’t sent that e-mail. What’s worse, Kriss apparently didn’t even bother to read my complaint. What I wanted was information. I wanted to know if the card was never produced. After selling me a defective item, the least they could do is put me in touch with someone who could actually get me an answer to the question.

If I were really cynical, I might wonder if the only reason Kriss asked me to send a direct e-mail response was so the BBB would close the case.

Actually, I am that cynical.

Hasbro Customer Service’s only goal is to waste your time and piss you off so much that you don’t bother contact them or they pacify you with coupons so you go away and stop bothering them with anything as trivial as getting what you paid for.

I have had Hasbro Customer Service out and out lie to me before, also about a store exclusive that they sad they could absolutely replace. I got two random toys that did me no good and had to shell out another $50 to buy the toy again. Fucking thieves. I still have those two damn toys in a box eight years later.

Back in April when The last Knight Toys came out, I wanted to buy a box of Tiny Turbo Changers from Hasbro Toy Shop (yes, I know they aren’t the same customer service as Hasbro, but they are clearly cut from the same cloth and carry the name Hasbro). The problem was the web site listed a single blind bag for $69.99. I knew that most likely the description was and it was a box, but I wanted to make sure. I called Customer Service and they called me back a while later to confirm it was a box. Seven months later the description on Hasbro Toy Shop is still wrong. Someone reports that your site has an item listed wrong and you ignore it. Makes sense if your company doesn’t give a shit.

In case you’re wondering, I did try to find someone to help me with this at Hascon. I spoke to someone in the Transformers area about this. He told me to contact Customer Service. Fucking prick.

At the end of the day, all I really want is for someone at that company to confirm that the wrong card was produced and packed with Infernocus so I don’t have to wonder if its out there to track down. It really shouldn’t be that much to ask, but then I’m only a customer.

I’m 36 years old, and I work in network tech support for a public school system. I am a huge fan of Star Trek, Transformers, Harry Potter, and Marvel Comics as well as numerous other fandoms. I’m a big sports fan, especially the Boston Red Sox and the New England Patriots. I collect toys (mostly Transformers but other stuff too), comic books, and Red Sox baseball cards. I watch an obscene amount of television and love going to the movies. I am hopelessly addicted to Wizard Rock and I write Harry Potter Fanfiction, though these days I am working on a couple of different original YA novels.
View all posts by lmb3 →
This entry was posted in Toys, Transformers and tagged Customer Service, Hasbro, Transformers. Bookmark the permalink.