On Golden Pond Scum: Our strained relationship with toys.

Last week, we had a fake that’s better than a modern real, and a real that ought to have been fake…since we’re on the subject of gold plastic, let’s toss this one in just for fun:

Linkin Park Soundwave! The box is a lot bigger in person. They could have saved half the packaging if they’d inserted him in alt mode.

I don’t know what they made that velvet out of, but it smells just awful. I probably got cancer just touching it. I’m leaving this box outside to air out.

The pamphlet is cute, and I like that all the accessories are Chrome. I think I would have liked it if more of Soundwave was gold Chrome. I’m disappointed. Furthering my disappointment is that this doesn’t appear to come with a sticker sheet. Some gold chrome stickers, like the Predacons had, would have been a great option. These guys look just naked without their details.

Everybody looks like they took a dip in the electrum. I suppose that’s amusing.

Transformation was smooth. It didn’t feel like he was going to crumble in my hands. Today, anyways. I’m told that we don’t use the gold plastic that crumbles anymore. We’ll see. I have an X-Wing from last year that’s literally turning to liquid on my table, so I don’t put stock in modern plastic, either. 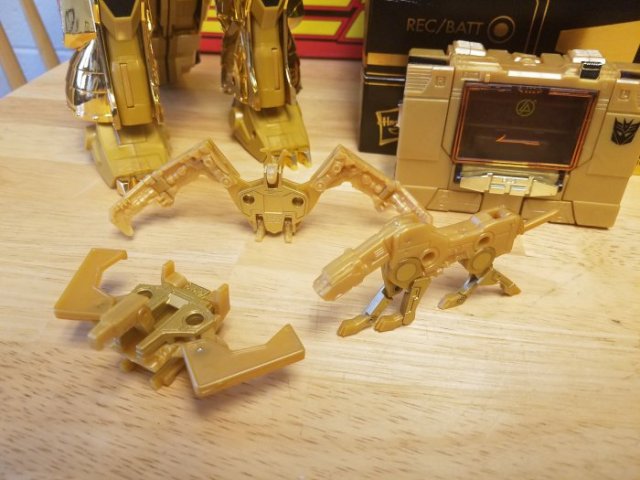 I’m a sucker for G1 molds, so while the other ones get relegated to the bottom of the shelf (or eBay more likely), Soundwave will have a place with his brethren.

I’m 36 years old, and I work in network tech support for a public school system. I am a huge fan of Star Trek, Transformers, Harry Potter, and Marvel Comics as well as numerous other fandoms. I’m a big sports fan, especially the Boston Red Sox and the New England Patriots. I collect toys (mostly Transformers but other stuff too), comic books, and Red Sox baseball cards. I watch an obscene amount of television and love going to the movies. I am hopelessly addicted to Wizard Rock and I write Harry Potter Fanfiction, though these days I am working on a couple of different original YA novels.
View all posts by lmb3 →
This entry was posted in Toy Reviews, Toys, Transformers and tagged Buzzsaw, Laserbeak, Linkin Park, Ratbat, Ravage, Soundwave. Bookmark the permalink.