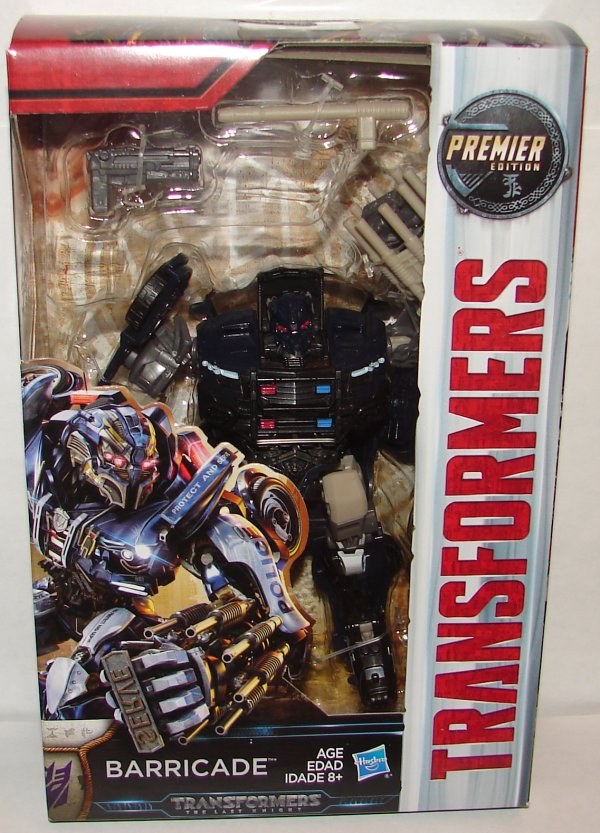 Vehicle Mode: I love Barricade’s car mode.  “To punish and enslave” is written above his rear wheels just as it should be.  Hasbro might have even figured out how to properly paint toys, as he does have his tail lights painted, something Age of Extinction toys only had in the Platinum Edition sets.  Unfortunately, the one thing missing is the police badge with the Decepticon logo on it from the previous Barricade toys.  They instead just use a standard Decepticon logo.  It doesn’t take a genius to figure out that given the climate of the last few years that they did not want to use a police badge with a Decepticon logo on it.  That really sucks.  Only someone who is grotesquely stupid would connect that logo to actual police, especially when it’s been used for the last ten years. 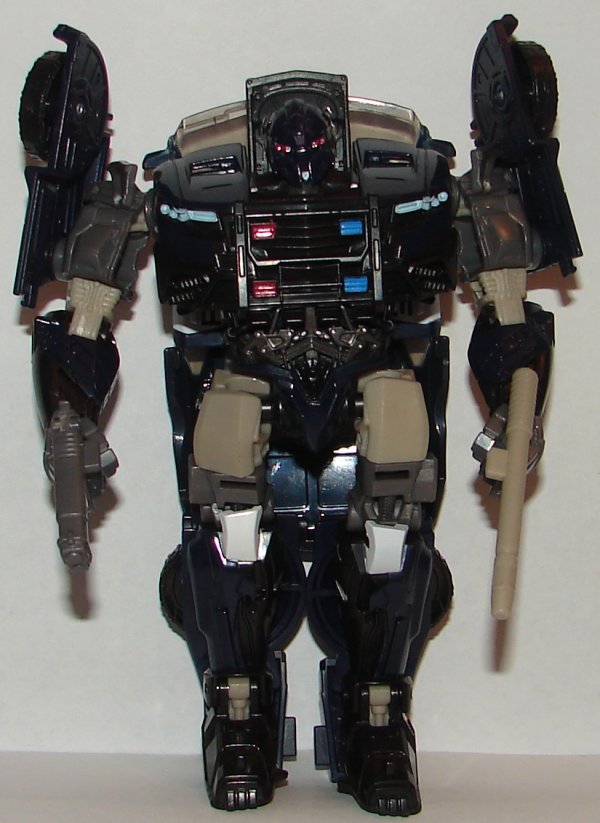 Robot Mode: In robot mode, Barricade’s tan thighs and elbows look out of place.  This is one time when Hasbro’s usual gray parts would have looked better.  He kind of looks like a prototype.  I love the way the weapon rack wraps around his hand, and how his billy club and gun peg onto his hips.  If you look at his hands you can also see that he is wearing brass knuckles. With the words “SERVE” and “PROTECT” molded onto them backwards so that when he punches someone they will have the words stamped into them.  That’s awesome.

Overall: Barricade is a pretty good toy, though some bad color choices and the lack of his proper logo really detract from it.  Still, I recommend him, but maybe track down some correct logo stickers.

I’m 36 years old, and I work in network tech support for a public school system. I am a huge fan of Star Trek, Transformers, Harry Potter, and Marvel Comics as well as numerous other fandoms. I’m a big sports fan, especially the Boston Red Sox and the New England Patriots. I collect toys (mostly Transformers but other stuff too), comic books, and Red Sox baseball cards. I watch an obscene amount of television and love going to the movies. I am hopelessly addicted to Wizard Rock and I write Harry Potter Fanfiction, though these days I am working on a couple of different original YA novels.
View all posts by lmb3 →
This entry was posted in Toy Reviews, Toys, Transformers and tagged Barricade, Deluxe, The Last Knight, TLK, Toys, Transformers, Transformers The Last Knight. Bookmark the permalink.