For the humor-challenged denizens of the Internet, I wish to point out that there is no conspiracy.  It just sounded like a cool title.  I mean…it would be amazing if there was some kind of conspiracy to deny us of toys, but there isn’t.  (Doesn’t mean that I won’t speculate on one.)

If you did not read my original post on this subject, Transformers: The Last Knight Toy Release Day: How Toys R Us Stole Christmas, then you’ll want to read that first.  This won’t make any sense otherwise.  (That’s assuming this makes sense at all.)

Late last night, or more accurately at 1:00 this morning, I was scrolling through twitter before going to bed and found an article posted by TFormers.com.  (I can neither confirm nor deny that I was still awake at 1:00 because I was still pissed off about TLK toys.  Okay, yeah, I was.)  Interestingly, this is the only site that I’ve seen reporting this.  (Doesn’t mean no one else has, but the other big sites that I follow haven’t.)  Apparently yesterday, the 24th, around noon, Hasbro’s Official Transformers Instagram account posted this image. 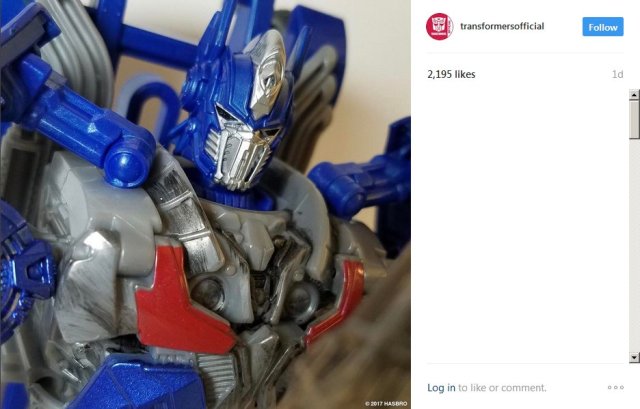 It’s not the photo of the toy that is important, but the text.  “Check out the detail on these Transformers: The last Knight figures.  Now available online!  In stores Friday!”

For two months Hasbro has been advertising Monday April 24th as the official release day for TLK toys.  As recently as last week they announced the “Reveal Your Shield” promotion, which repeated April 24th as the official release date.  Then hours after stores on the east coast were open and people expected the toys to be available Hasbro puts on Instagram, which is official, but hardly the right place for a press release, a notice that they have changed the information they have been spouting for two months?  I don’t think so.  Someone really screwed the pooch, or to quote my favorite line from Days of Thunder, “looked like a monkey fucking a football out there”.  (Seriously, that is a hilarious line.)  But who?  And more importantly, why?

Did Hasbro, an enormous company worth who knows how much, just forget to mention that the 24th was the official release date online only and remember to tell us only after the date had come and stores were open?  I mean…it’s possible.  They have shown themselves to be incompetent on numerous occasions.

Here’s an interesting little tidbit.  I’ve heard numerous reports of Walmart and Target selling TLK toys with no problem yesterday.  Many were even selling them beforehand.  Toys R Us insisted to me that it is the 28th.  One store even showed me their inventory sheet.  It did say the 28th.  That seems pretty cut and dry, but as they say in infomercials, wait there’s more!

Clearly someone fucked up somewhere.  Epically.  We’re never going to get an answer as to who, because neither Toys R Us nor Hasbro cares.  This is not surprising to me, it’s just the way it is.

What is my theory?  Glad you asked.

Toys R Us not having the toys online and the timing of the Instagram post after people would have been in store and complaining, is way too coincidental.  (I mean that dead seriously.  The Instagram post HAD to be in response to what was going on.)  I know that neither of the Toys R Us stores that I went to had their whole inventory in the building yet.  I think Toys R Us chose to delay the release and Hasbro didn’t bother to announce it until after the opening, or didn’t know until after the opening.  More likely it’s the former since a lot of Targets and Walmarts don’t have the toys out yet.  I’m guessing Hasbro changed the in store date, but didn’t tell anyone.  Was that just a mistake?  Why would they do that?

(Okay, this is going to be a little conspiratorial, but I’m only going with the evidence here.)

As I said in my previous post, I had one Target tell me in 2009 that they hold back the new product on purpose so they can try to push clearance stuff on everyone looking for the new stuff.  It seems unlikely, even with their history of poor decisions (Botcon 2009 First day release toys, Fun Publications, Beast Wars Mutants, killing Optimus Prime, Wheelie, I could go on) that Hasbro would bother.  Nothing is on clearance right now, but stores do have a fair amount of old TF product on the shelves, and rumor has it we might be getting new RID and Generations toys with TLK toys Friday.

It’s a great conspiracy theory.  It does seem a bit unlikely.  Store managers holding back product to sell older stuff, that is not only plausible, I know it happens.  Big companies colluding to do it?  Yeah, I don’t really buy it either.  I kind of wish I did, but I would look awful in a tinfoil hat.

The reality is, Hasbro probably just fucked up and forget to tell everyone for the last two months, or it was changed recently for some reason, and forgot to tell everyone.  If this is the case, it is way up there on the list of all time fuck ups.  (Proportional to it being about, you know, toys)  That is like deciding to land the Hindenburg captained by Jar Jar Binks on the deck of the Titanic also captained by Jar Jar Binks in the Bermuda Triangle during a hurricane on Friday the 13th.

In all seriousness, I wonder if in the coming months we will see a change is the Transformers brand team.  Screwing up the rollout of millions of dollars in toys to promote a movie that will make a billion dollars?  People get fired for that kind of thing.

Though I doubt it will happen, I kind of hope Hasbro does make some public comment on the release date snafu.  I think I have one more post in me on this subject.  Everyone loves a trilogy.

I’m 36 years old, and I work in network tech support for a public school system. I am a huge fan of Star Trek, Transformers, Harry Potter, and Marvel Comics as well as numerous other fandoms. I’m a big sports fan, especially the Boston Red Sox and the New England Patriots. I collect toys (mostly Transformers but other stuff too), comic books, and Red Sox baseball cards. I watch an obscene amount of television and love going to the movies. I am hopelessly addicted to Wizard Rock and I write Harry Potter Fanfiction, though these days I am working on a couple of different original YA novels.
View all posts by lmb3 →
This entry was posted in Toy Reviews, Toys, Transformers and tagged Hasbro, Toys, Toys R Us, Transformers, Transformers The Last Knight. Bookmark the permalink.