Hasbro kind of screwed these sets up.  Kup should have been in the set with Hot Rod.  Wreck-Gar and Junkheap should have been in this set.  That would have made more sense.  Then they could have put Grimlock in the set with Kup and Hot Rod.  Clearly Hasbro wasn’t willing to put that much thought in to it.  Anyway, I have never done full reviews of the Blurr and Kup molds, so this is as good an opportunity as any.

Read my review of the original version of Arcee here.

This version of Arcee is much closer to the G1 animation color scheme than the original toy.  Its metallic pink finish looks great.  I kind of preferred the paint jobs on the guns from the previous version, but that’s a small thing.  This is definitely the best version of this toy.

Vehicle Mode: I never liked this Blurr mold.  It’s just a generic race car.  It looks nothing like G1 Blurr.  I do prefer the paint job and metallic paint on the new version. 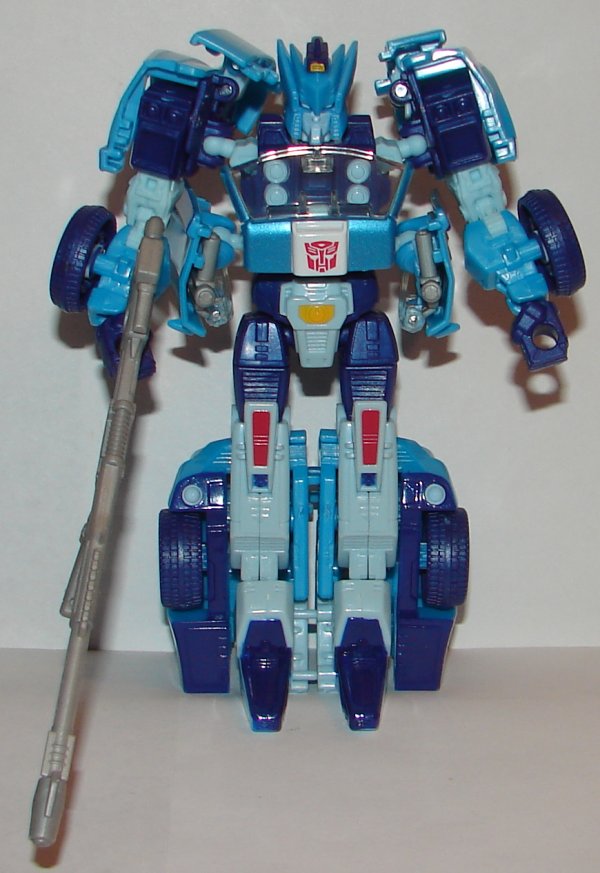 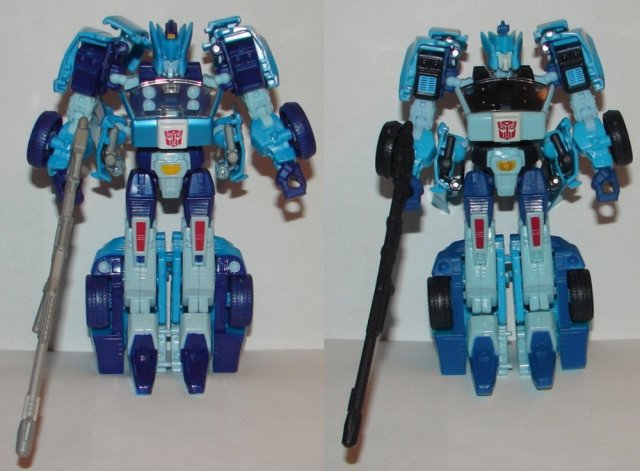 Robot Mode: Nothing about his robot mode says Blurr except for the piece on top of his head.  This isn’t a bad toy, it just isn’t Blurr.  They really should have used the Titans Return toy with the Japanese Legends paint job.  Having said that, it’s not a bad looking toy.  The new version does look better with the darker blues and metallic paint.

Vehicle Mode: Kup looks great in pickup mode.  I know it’s not true to the G1, more of a present day rather than futuristic pickup truck, but it looks great.  I hated the paint job on the original.  It was way too dark.  This version is much truer to the G1 colors. 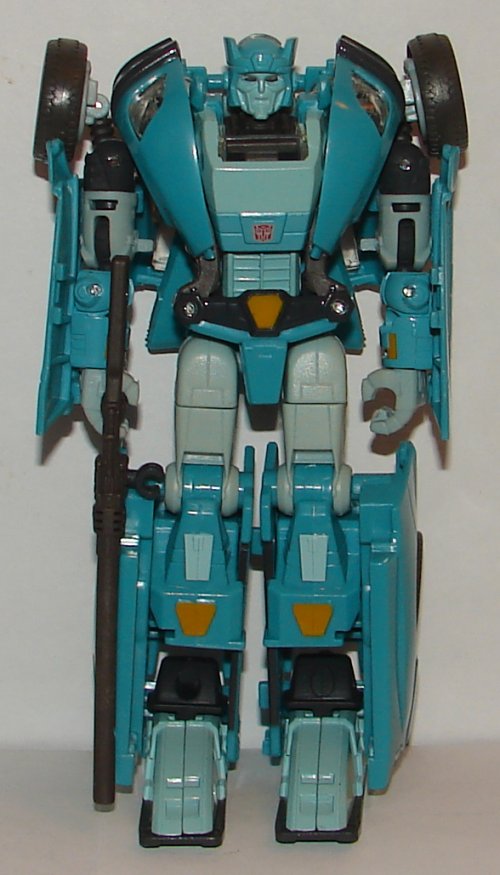 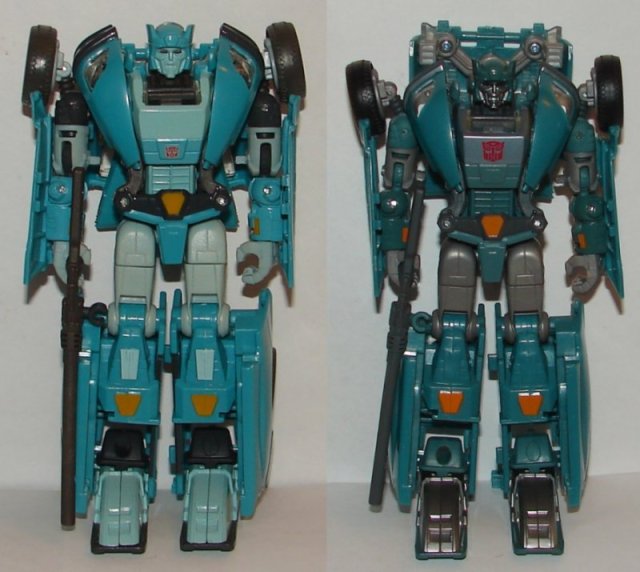 Read my review of the original version of Springer here. 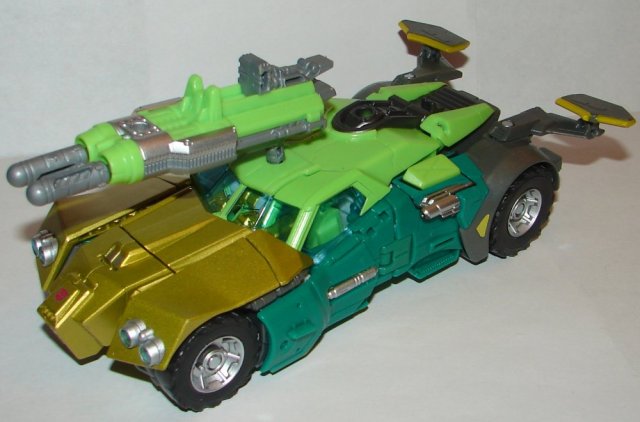 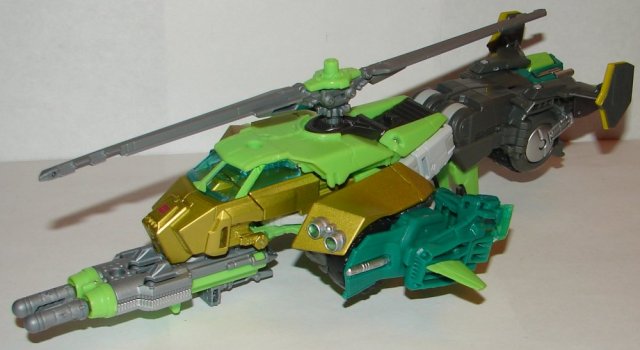 The new paint job on Springer is a mixed bag.  Nothing about the toy is G1 animation accurate, so let’s put that aside.  I like the gold, though it’s not G1 toy accurate.  The green on the vehicle sides is also not G1 accurate.  I do like the lighter green color.  He’s got some new silver paint apps on the car sides and his hubcaps.  I think overall I like this version better, but I’m not sure why they added all the green to him.  Springer was primarily gray.

Read my review of the original version of Minimus Ambus here.

There may be no toy I’ve ever hated as much as Minimus Ambus.  IDW destroyed Ultra Magnus by creating this joke.  This version has a better paint job, but a turd is still a turd even if its painted in bright colors.  This toy does not even belong in this set.  They should painted him orange and called him Wheelie, or painted his face flesh color and given him the color’s of Daniel’s exo-suit.  Or they could have just smashed him with a hammer.  That would have worked too.

Read my review of the original version of Ultra Magnus here.

Ultra Magnus is in almost the same color scheme as the original.  Some of the colors are slightly darker, and some are replaced with metallic paint.  The only real changes are the lower bed of the trailer is now blue instead of white, the silver stripe around the cab is now blue, and in robot mode his waist is blue instead of white.  The changes are pretty minimum, but the metallic paint does look great.

Overall: At $150 this set is crazy overpriced, but if you are missing the older molds in this set, it might be worth picking up.  Overall the paint jobs are better than the originals.

I’m 36 years old, and I work in network tech support for a public school system. I am a huge fan of Star Trek, Transformers, Harry Potter, and Marvel Comics as well as numerous other fandoms. I’m a big sports fan, especially the Boston Red Sox and the New England Patriots. I collect toys (mostly Transformers but other stuff too), comic books, and Red Sox baseball cards. I watch an obscene amount of television and love going to the movies. I am hopelessly addicted to Wizard Rock and I write Harry Potter Fanfiction, though these days I am working on a couple of different original YA novels.
View all posts by lmb3 →
This entry was posted in Toy Reviews, Toys, Transformers and tagged Arcee, Autobot Heroes, Blurr, Kup, Platinum, Platinum Edition, Platinum Series, Springer, Toys, Transformers, Transformers: Platinum Edition, Transformers: Platinum Series, Transformers: The Movie, Ultra Magnus. Bookmark the permalink.