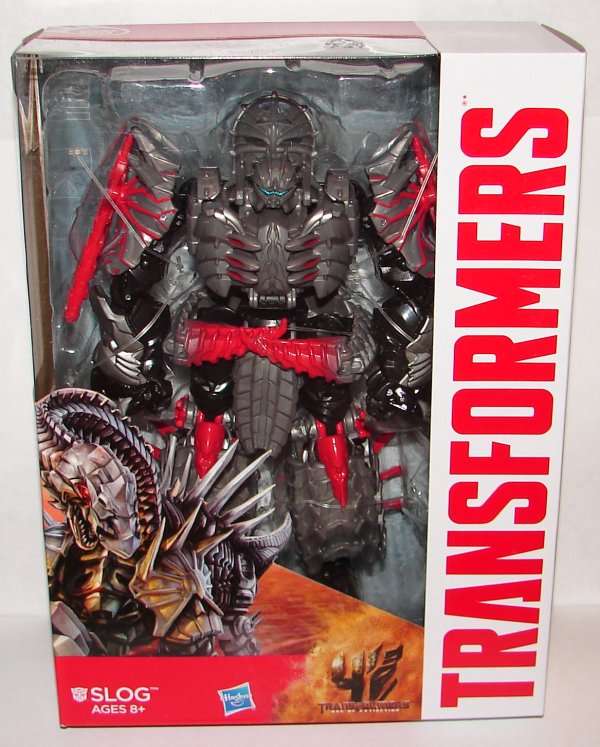 Dinosaur Mode: Slog looks amazing in dinosaur mode, but he has two enormous, massive, colossal design flaws.  First off, he has a flap of soft plastic that hangs from the bottom of his neck.  It’s meant to cover his robot head.  Unfortunately, the instructions don’t really tell you how it’s supposed to stay in place, and I can’t get it to stay.  It’s really unfortunate, as it should have been easy enough to give it more shape so that it didn’t have to be folded and resist staying in place.  The second flaw is that his dinosaur front half doesn’t seem to connect or lock into place with the back half.  He stands fine, but if you pick him up by the front or back the other side basically flops free.  It might be that there are solutions to this, but the instructions are deplorable.

Robot Mode: On the other hand, in robot mode he looks completely awesome.  I love the head sculpt and the black, gray, and red look great.  He’s just fantastic.

Overall: It’s too bad that he has such awful flaws, because if he didn’t, this would be one of the best molds in the line.

I’m 36 years old, and I work in network tech support for a public school system. I am a huge fan of Star Trek, Transformers, Harry Potter, and Marvel Comics as well as numerous other fandoms. I’m a big sports fan, especially the Boston Red Sox and the New England Patriots. I collect toys (mostly Transformers but other stuff too), comic books, and Red Sox baseball cards. I watch an obscene amount of television and love going to the movies. I am hopelessly addicted to Wizard Rock and I write Harry Potter Fanfiction, though these days I am working on a couple of different original YA novels.
View all posts by lmb3 →
This entry was posted in Toy Reviews, Toys, Transformers and tagged Age of Extinction, AOE, Dinobot Slog, Slog, Toys, Transformers, Transformers: Age of Extinction, Voyager. Bookmark the permalink.