These AOE Constructbots are a huge improvement over everything that has come before in the line. They have changed the transformation from the previous toys. All three still have the same basic transformation, but the vehicles are much improved.

Dinosaur Mode: These dinosaur partners are pretty cool. Gnaw is a Dimetrodon, and is probably the least cool of the three. He looks nice, but his only weapon is a missile launcher in his mouth.

Vehicle Mode: These new vehicle modes are a thousand times better than the previous Constructbots. It even looks like a vehicle, though he looks more like a car than a truck, but I can live with that.

Robot Mode: His robot mode looks great, though his forearms are pretty huge (as they are with all of them in this wave). His head sculpt is a little odd as he has neither a mouth plate nor a mouth. He looks great with his dinosaur armor. I love the enormous ax.

Dinosaur Mode: Roughneck is an Ankylosaurus, and looks really great with a rack of missiles on his back. His tail club is a missile that can be launched from his mouth.

Robot Mode: Drift’s robot mode is okay, but he looks awesome with his dinosaur armor, and he is the best of the three toys in this wave. The only thing I wish they would have changed is to make part of the dinosaur head removable so his gun was not so large. 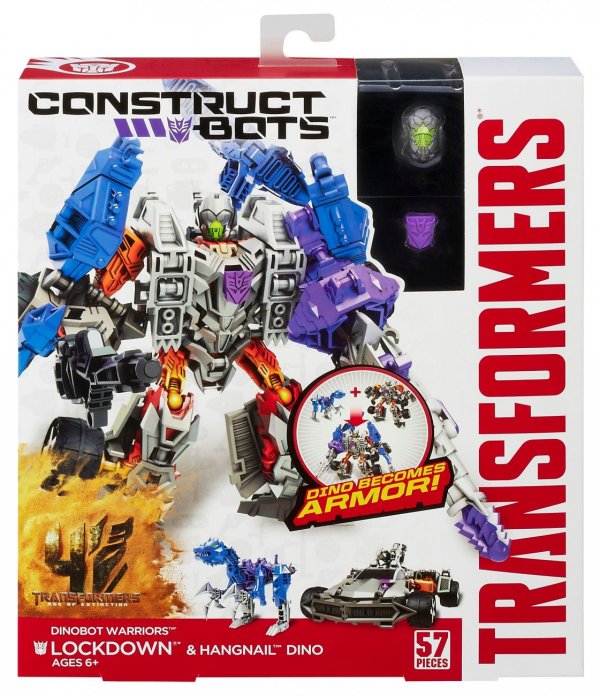 Dinosaur Mode: Hangnail (which is a silly name for a robot) seems to be a Velociraptor or something similar. He’s nowhere near as nice as Roughneck, but not too bad. Hangnail does bring up an interesting question. Are all the Dinobots in the movie Autobots? It makes no sense for Lockdown to have one if they are all Autobots. Of course, it might just be that it was convenient to give him one so they could do a toy of him in this series. I will be interested to find out which one it is.

Vehicle Mode: I really like Lockdown’s vehicle mode, but the hood doesn’t seem to stay together, the clasp isn’t very well designed. I love the big gun they gave him.

Robot Mode: The gray and orange look fantastic on his robot mode. From looking at other Lockdown toys it appears that he has a face shield, but that is all we get to see here, no face beneath it.

Overall: These are a lot better than the original. I think Drift is the best. I’m looking forward to more of these.

I’m 36 years old, and I work in network tech support for a public school system. I am a huge fan of Star Trek, Transformers, Harry Potter, and Marvel Comics as well as numerous other fandoms. I’m a big sports fan, especially the Boston Red Sox and the New England Patriots. I collect toys (mostly Transformers but other stuff too), comic books, and Red Sox baseball cards. I watch an obscene amount of television and love going to the movies. I am hopelessly addicted to Wizard Rock and I write Harry Potter Fanfiction, though these days I am working on a couple of different original YA novels.
View all posts by lmb3 →
This entry was posted in Toy Reviews, Toys, Transformers and tagged Age of Extinction, AOE, Construct-A-Bots, Construct-Bots, Constructabots, Constructbots, Dinobot Warriors, Drift, Gnaw, Hangnail, Lockdown, Optimus Prime, Roughneck, Toys, Transformers, Transformers: Age of Extinction. Bookmark the permalink.