Another Mystifying Move by Hasbro

I’ve been looking through pictures from Toy Fair 2012, and am once again completely befuddled at the decisions being made at Hasbro.  Some of the first pictures I saw from Toy Fair 2012 were the preview available at TransformersClub.com.  In that preview several toys do not carry the “PRIME” logo beneath “Transformers”.  This initially led me to believe that the new line was not Prime specific.

Well, as I’ve now gone through all the Toy Fair 2012 reports, I realize, this assumption was incorrect.  The toys I saw without “PRIME” on them were TF:Prime toys repainted into non-show characters (specifically, Soundwave as a car and the blue Bumblebee repaint, Hotshot).  The only “Movie” series toy still on the list to come out in the USA is the “Movie Trilogy” series Optimus Prime, which will be the Wal-Mart exclusive Deluxe Optimus Prime with the trailer from the Japanese Chronology set.

The only other toys in the “Movie Trilogy” series will be four Deluxes.  Here’s the lousy part.  Two of those Deluxes are Soundwave and Wheeljack, neither of which has received any USA release.

So, in the interest of clarity, the following toys have or will come out, but not in the USA, from the Dark of the Moon line (not including Speed Stars or previously released Japanese exclusives): Deluxe Soundwave, Deluxe Wheeljack, Deluxe Leadfoot, and Human Alliance Soundwave.  These are all available in Japan.  Wheeljack and Soundwve will be available as Movie Trilogy Series in Asia.

How do you cancel Deluxe toys of characters that are actually in the movie after releasing eighteen Deluxes, eight of which were either repaints, or non movie characters (Skids, Jolt, Mudflap, Air Raid, Specialist Ratchet, Darksteel, Cyberfire Bumblebee, and Thundercracker).

How do you start the Human Alliance toys with two repaints, then release two new molds, one a store exclusive, and cancel the other new mold altogether.

Maybe the line would have sold better if they actually sold the new molds first.  I’m making an assumption that the line didn’t live up to expectations, as I can’t seen any other reason for it to be ended early.  I know that, as we saw wwith the 2012 line, some retailers stopped ordering in anticipation of the new product, but that’s all the more reason to get the new toys out first.

And, Hasbro, in case you forgot, you have a webs ite for selling toys.  Just do exclusives if the stores don’t want the toys.  It’s not that hard.

Okay, I’m done complaining about them for today.  We’ll see what tomorrow brings.  Maybe it will occur to them that people want the DotM toys they canceled too.  Hasbro claimed to be listening about Transformers: Prime First Edition toys.  I’m still going to believe that when I see it.

Update: I found several USA carded Deluxe Soundwave’s on ebay, one in the USA and one from a seller in Taiwan who has them in quantity (as well as a loose one in the USA).  I’m not sure what this means.  At $30, I wasn’t going to pass on it, if it (as well as others) is showing up at stores in the USA.  Also found quite a few USA boxed Human Alliance Soundwaves coming from Taiwan.  No Deluxe Wheeljacks or Leadfoots in USA packaging yet.  Not sure what all this means.  Could be that some of these will/are showing up at discount stores.  I hate Hasbro.

Here is a not quite complete set of 1985 McDonald’s Transformers toys.  These are pretty hard to find, as they were only available in the St. Louis area.  There were four toys, Gears, Brawn, Bumblebee, and Cliffjumper that were available in a multitude of colors.  I am still missing both Gears and Brawn in blue/red and teal/yellow, as well as Bumblebee in teal/black (I have not seen any confirmation of a Cliffjumper in teal/black).

In addition to the toys, here are a few other related items I have, a table advertisement and the mail order catalog all the toys were packed with. 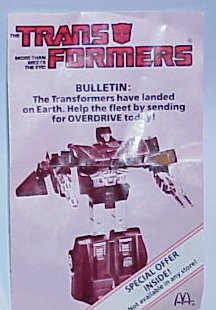 Sadly, I do not yet have the Happy Meal Box. 😦

As always, you can find these and 7500+ other items at TFMuseum.com.

I’m 36 years old, and I work in network tech support for a public school system. I am a huge fan of Star Trek, Transformers, Harry Potter, and Marvel Comics as well as numerous other fandoms. I’m a big sports fan, especially the Boston Red Sox and the New England Patriots. I collect toys (mostly Transformers but other stuff too), comic books, and Red Sox baseball cards. I watch an obscene amount of television and love going to the movies. I am hopelessly addicted to Wizard Rock and I write Harry Potter Fanfiction, though these days I am working on a couple of different original YA novels.
View all posts by lmb3 →
This entry was posted in Books, Toys, Transformers, Transformers Artifact of the Week and tagged Books, Bumblebee and Me, Dan Gilvezan, Hasbro, McDonald’s Transformers, Toys, Transformers. Bookmark the permalink.