Transformers gift sets have attained a kind of legendary status in the hobby. Whether it’s the never released US Combaticons and Terrorcons gift sets or the ultra rare Seacons gift set, every G1 collector would love to have these, even though they actually already have the single toys. Sadly, the Revenge of the Fallen Constructions gift set is the exact opposite of that. It is absolute garbage. It is a pile of junk, and should haul itself off to a junkyard. Hasbro really screwed up on this one. Of the eight toys, only five have any different paint apps, and none of them are impressive at all. (Maybe one is, but it’s not worth buying this set for.) If you already have the single boxed versions, for $260 you’re basically getting a nice box and not much else. 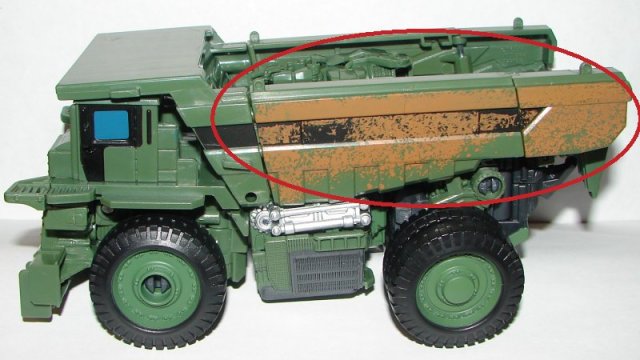 Long Haul now has some paint apps on his sides to make him look dusty. Kind of silly that the paint app just stops like that rather than continue along his whole side. It’s just lousy looking. If they wanted to make him look like he’s been driving around the desert, they needed a lot more paint apps. Frankly, this is crap.

There are a lot of new paint apps on devastator’s face. Lots of bronze paint on various parts including his front teeth. He has additional apps on his forehead and above his eyes. Is it a better paint job? Yes. Is it worth the price on the box set? No.

Scrapmetal has some smears of paint on what are essentially Devastator’s fingertips. It’s pathetic. 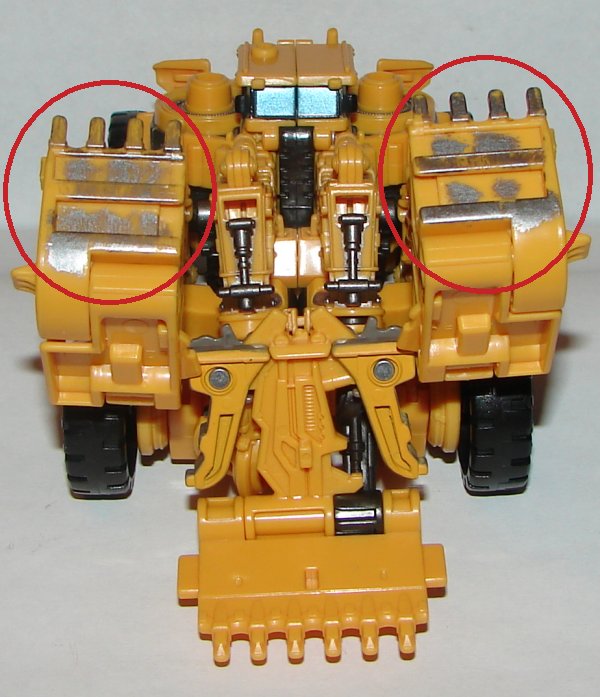 And finally, you may need to squint to see the pain they added to Skipjack.

Overall: This is garbage. If they had really repainted him to look dusty from being in the desert, this might have been worth it, but Hasbro well, I think the below photo best illustrates what Hasbro gave the fans with this toy.

I’m 36 years old, and I work in network tech support for a public school system. I am a huge fan of Star Trek, Transformers, Harry Potter, and Marvel Comics as well as numerous other fandoms. I’m a big sports fan, especially the Boston Red Sox and the New England Patriots. I collect toys (mostly Transformers but other stuff too), comic books, and Red Sox baseball cards. I watch an obscene amount of television and love going to the movies. I am hopelessly addicted to Wizard Rock and I write Harry Potter Fanfiction, though these days I am working on a couple of different original YA novels.
View all posts by lmb3 →
This entry was posted in Toys, Transformers, Transformers Artifact of the Week and tagged Combiner Devastator, Devastator, Revenge of the Fallen, Studio Series, Toys, Transformers, Transformers Revenge of the Fallen, Transformers Studio Series. Bookmark the permalink.