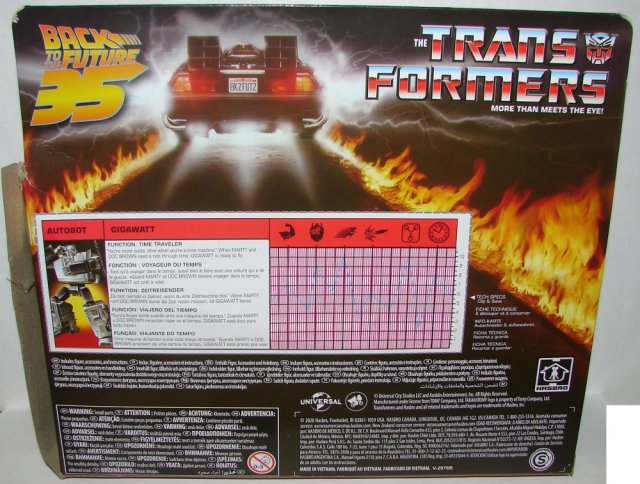 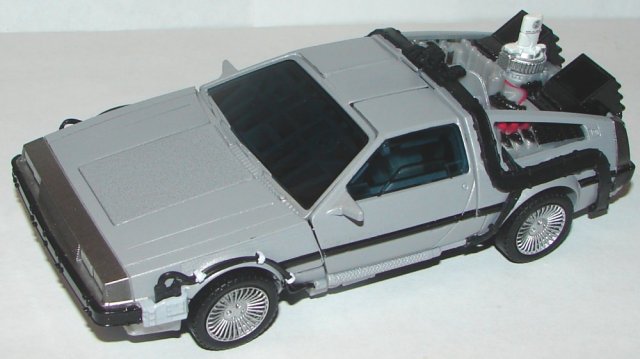 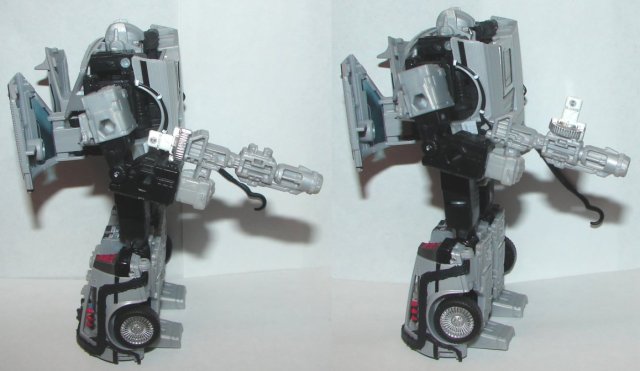 Let’s start with the box. Gigawatt comes in a beautiful G1 style box, but there is one really odd thing about it. G1 boxes like these open on each end, usually with the flap opening back to front, as Gigawatt has on one side of the box, but on the other, it open’s down. It’s really weird. You just don’t see boxes open like that with a long flap off the short edge. It’s certainly less strong, and way easier to damage the box. I ordered two and one of them had damage to that end, which looks like whoever packed it caught the edge on something and tore it. I’d love to know why the box was made that way. As to Gigawatt himself, the only signs that he is based on the Siege Sideswipe mold is his thighs, waist, forearms, and fists. He’s almost a whole new toy, and he is awesome. I was not expecting to like Gigawatt this much. In vehicle mode he is incredibly detailed. He has a Mr. Fusion accessory, and his wheels fold in for flight mode. I was not expecting that at all. The only problem with his vehicle mode is the crappy soft plastic hook arm that was malformed in the package. In robot mode he looks pretty great. I wish they had made his chest fold in a little, as it is basically a big rectangular block, but that’s my only complaint. There is an odd thing with his gun though. There are two places for Mr. Fusion to plug in on his gun, one on the back, and one on top. The instructions do not show it plugged in on top, but the connector is there. The connector sticking out the back makes his gun not go completely into his hand. When Mr. Fusion is connected on the back, it’s even worse. I like it on top better.

Overall: Gigawatt is an absolute must have.

I’m 36 years old, and I work in network tech support for a public school system. I am a huge fan of Star Trek, Transformers, Harry Potter, and Marvel Comics as well as numerous other fandoms. I’m a big sports fan, especially the Boston Red Sox and the New England Patriots. I collect toys (mostly Transformers but other stuff too), comic books, and Red Sox baseball cards. I watch an obscene amount of television and love going to the movies. I am hopelessly addicted to Wizard Rock and I write Harry Potter Fanfiction, though these days I am working on a couple of different original YA novels.
View all posts by lmb3 →
This entry was posted in Toy Reviews, Toys, Transformers and tagged Back to the Future, Gigawatt, Transformers. Bookmark the permalink.