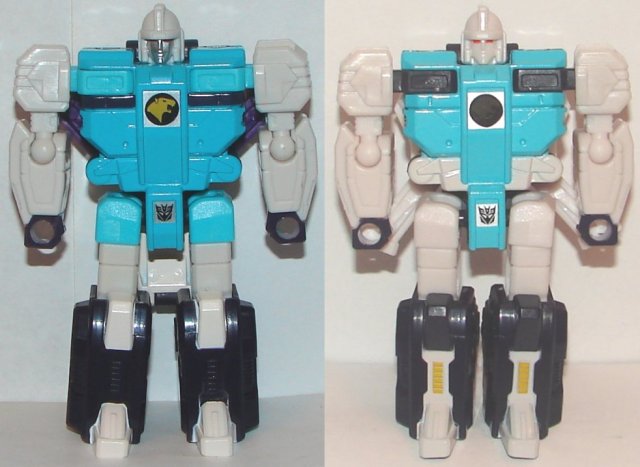 As you can see there are a number of color differences between the original release and the new Pounce, but I’m going to focus on the important ones. First off, his face. The silver face makes this toy 1000% better looking than the original. It’s a small thing, but it makes a huge difference. The other big difference is the sticker on his chest. They did away with the rub sign in favor of a fake rub sign. If you read my blogs about the Power of the Primes Terrorcons, you may recall how much I HATED that. However, these aren’t the faction symbols, they are the clone symbols, and I really like them. The other color changes, I could go either way on, though I kind of prefer the teal on his hips rather than the all white legs. In Puma mode, the original version has the really random red/pink section on his back in front of his tail. The G1 toy had pink legs and a pink tail. I’m guessing that’s why they used the red/pink. I much prefer the new paint job, and it’s a rare case of being better than the G1.

Wingspan’s color changes, and my opinion on them are the same as Pounce’s in robot mode, so I won’t bother repeat them. In bird mode, they swapped out his pink wings for purple. As with Pounce, it’s less accurate to the G1 toy, but better looking. They also put more teal on the body of the bird, where the first version was mostly black. That’s a nice change.

Overall: This is a really great set, that I highly recommend, but there are two things that really piss me off. They should have guns. It’s the very height of cheap to not include four little pieces of plastic to give them proper weapons. The other thing that still pisses me off is how the original versions were distributed with one from each close set in a $100 Titans Return box set. That was just plain lousy, and yes, it’s old news, but I’m no less annoyed by it. In fact, I’m probably a lot more annoyed by it now than I was then.