“Now, remember, before you do anything, think, ‘Is this what Sky Lynx would do in my position?’, and you will not go far wrong.” – Sky Lynx, Call of the Primitives

Base Mode: I universally despise all Leader Class base modes. They all suck, some worse than others. I did not think that a Commander Class base mode would be any better, but I actually love Sky Lynx’s base mode. I know, I can’t believe it either. It just looks really cool with the shuttle on top, and as a launch pad, it makes sense, unlike most Leader Class bases, which have little design, and a lot of “let’s-just-fold-it-up-this-way-and-call-it-a-base.” (That’s the same way they designed Bayverse Megatron alt modes for the first two movies.) Now, having said all that, it’s not perfect. The pegs that the shuttle pegs onto are not long enough. The ramp stabilizes it a bit, but it’s not a secure connection. They made it look cool, proper functionality is probably too much to hope for.

“Everybody out! Another perfect flight completed by yours truly, Sky Lynx. Flawless right down to the landing, naturally.” – Sky Lynx, Chaos

Individual Vehicle Modes: Before we get to the vehicle modes, I am so thrilled that this toy was officially licensed by NASA and carries the NASA logo. I kind of wish they had put the name ENTERPRISE on him for reasons I’m sure I don’t have to explain, but instead, they gave him the name Magnificence, which is such a perfect name for Sky Lynx. His space shuttle component is just about perfect. Paint apps are perfect. I wish the vertical stabilizer locked in place. It stays pretty well, but moves to either side. It just needed a notch and tab to give it a “center” position, but that’s not a huge thing. He has three blast effects that double as engine plumes. His launch platform has two gun accessories.

“Unless I’m wrong, which is of course extremely unlikely, we are being led to a very ancient and sacred place.” – Sky Lynx, Call of the Primitives

Combined Vehicle Modes: Sky Lynx looks great in his combined form. While not shown in the instructions, it seems silly not to attach the guns from his launch platform.

“It appears I’ll have to save you as usual.” – Sky Lynx, Chaos 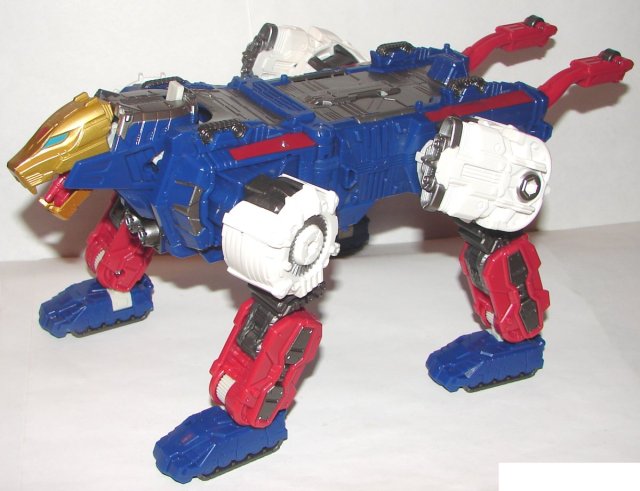 Individual Robot Modes: Sky Lynx’s lynx portion is awesome. I love that they gave him actual black treads on his feet, rather than molding them into the sides in blue. If you like articulation, he has plenty, but a little too much for my taste. His joints are all ratcheted though, so once you get him posed the way you want, at least he’ll stay that way. His lynx head looks great, and I love the dark gold color, still shiny without being chrome. The G1 toy’s back was blue with a few stickers, while this Sky Lynx has quite a few paint apps and plastic colors. Much better detail than the G1, something I almost never say. The only real failing is his inability to walk on his own. Sky Lynx’s motorized walk gave the G1 toy a major cool factor. It’s a shame Hasbro couldn’t recreate that. His bird mode is also a worthy homage to the original, but I do have a couple of small issues with it. First off, his wings. Rather than his bird wings just pulling out from his shuttle wings, his shuttle wings are on an arm that lets them be raised up to the level of his back, which makes more sense for a bird, even a prehistoric one to have the wings on his back instead of his sides. Unfortunately, they don’t lock in place. The joints ratchet, but it’s not a tight ratchet, so they don’t really stay in place lined up with his back. Would have been so east to have a port and peg for them to plug into. It’s not a fatal flaw, but it could have been so easily fixed, that it’s very disappointing. The other problem I have, and this is more subjective, is that his neck is all red, which does match the animation, while the toy had white panels on the sides of his neck. I just think the thin neck looks odd. Some white panels, smaller than the G1, on the sides would make it look less spindly. As I said, it is accurate to the animation, so I can’t really fault them all that much for this one.

“And that is why I am far superior to the Aerialbots. Including you, Slingshot.” – Sky Lynx, The Big Broadcast of 2006 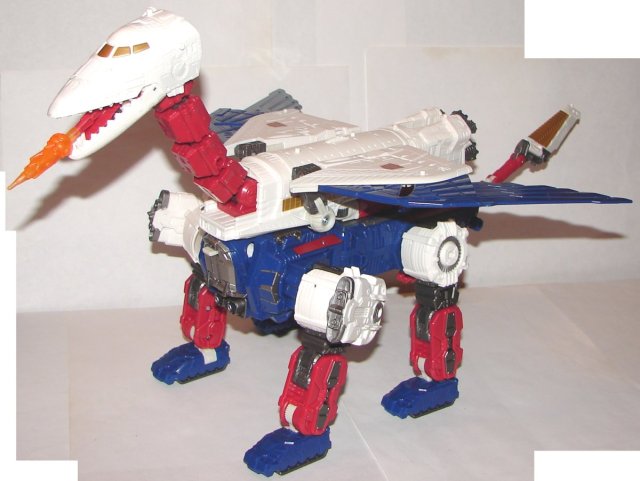 Combined Robot Mode: Behold the majesty of Sky Lynx! He’s amazing, and he would be the first one to tell you that.

“My leading role in this episode was enough to make it the prettiest in the whole series.” -Sky Lynx, Call of the Primitives

Overall: Despite his flaws, Sky Lynx is awesome. I can’t recommend him enough. He’s well worth $80, and I’ve seen a few on the shelves, so he doesn’t seem to be disappearing too fast, but I wouldn’t wait. I only saw Commander Class Jetfire in store twice.

“Save your ammunition, Autobots! Superior forces are taking over!” – Sky Lynx, Call of the Primitives

“As long as he delivers, I don’t care about his ego.” – Rodimus Prime, Call of the Primitives