They put a lot of detail into the molding on Bumblebee. Pity they couldn’t be bothered to do the same with the paint apps. It’s not a bad looking toy, just very plain.

At least Megatron can lift his arms., unlike the regular toy. Megatron doesn’t have a lot of paint apps, but they are better than Bumblebee. He too has a lot of detail n the mold. Would have been nice to give him his cannon. 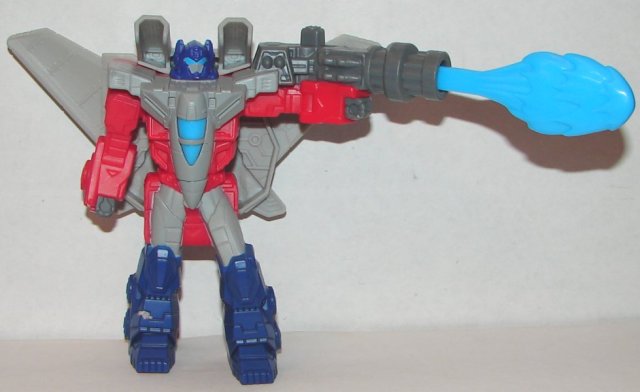 Optimus Prime looks great, except that they forgot the cannon on his other arm. How they could make he toy missing a big chunk of him is beyond me. His paint job is great though. He’s definitely the best of the bunch, though the missing cannon sucks. 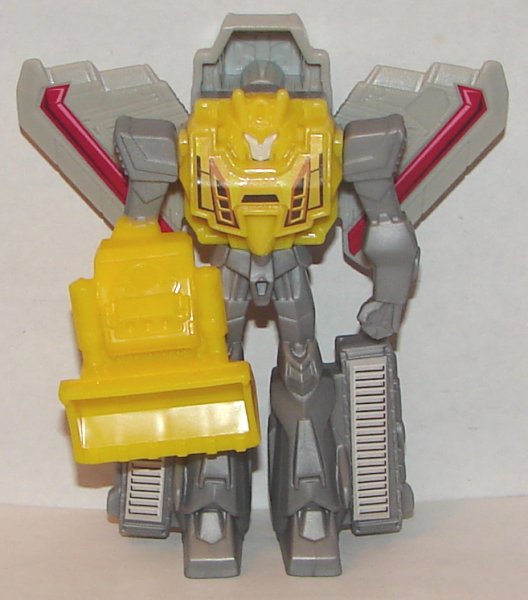 Oddly Starscream, unlike the others, comes with a sticker sheet with stickers that go on his chest, wings, and the treads on the sides of his legs. He looks okay, though I wish his arms wasn’t molded as part of his weapon.

Overall: These are about average for fast food toys.

I’m 36 years old, and I work in network tech support for a public school system. I am a huge fan of Star Trek, Transformers, Harry Potter, and Marvel Comics as well as numerous other fandoms. I’m a big sports fan, especially the Boston Red Sox and the New England Patriots. I collect toys (mostly Transformers but other stuff too), comic books, and Red Sox baseball cards. I watch an obscene amount of television and love going to the movies. I am hopelessly addicted to Wizard Rock and I write Harry Potter Fanfiction, though these days I am working on a couple of different original YA novels.
View all posts by lmb3 →
This entry was posted in Toy Reviews, Toys, Transformers and tagged Bumblebee, Burger King, Cyberverse, Megatron, Optimus Prime, Spark Armor, Starscream, Toys, Transformers, Transformers Cyberverse. Bookmark the permalink.