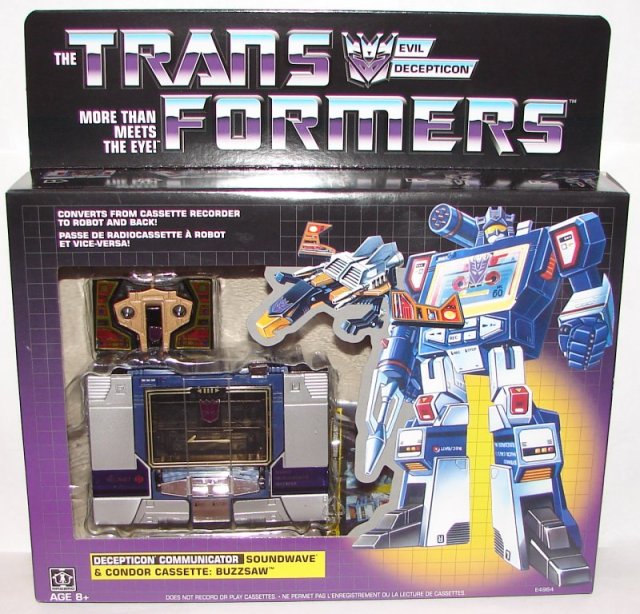 The last time Soundwave was reissued in the USA he came with Laserbeak in the Classics line as a Toys R Us Exclusive. As far as I remember, those came with the original weapons. Buzzsaw comes with modified weapons with shorter guns. I don’t for the life of me understand why. All sorts of Transformers parts have guns on them. I have no idea why this particular part required changing. It’s stupid. I am sure he probably has some small mold differences from the original, but I can’t put my hands on my G1 at the moment.

The only notable thing about Soundwave is that as usual, they have used the wrong buttons. He has Soundblaster’s extended buttons. One of the versions of Soundwave also use the extended door that could hold two cassettes (I think that was the Classics version). If they aren’t going to use the right buttons, then why not just use the Soundblaster door also so he can hold two cassettes? It just seems like they just don’t really give a shit, which we know Hasbro doesn’t.

Overall: We need more G1 reissues on the shelves, and I do love the box, but he is way overpriced. If they last to clearance I might buy another to keep in the beautiful box.

“Wrong again, you dipstick tape deck!” – Brawn, The Transformers, “Fire on the Mountain”

I’m 36 years old, and I work in network tech support for a public school system. I am a huge fan of Star Trek, Transformers, Harry Potter, and Marvel Comics as well as numerous other fandoms. I’m a big sports fan, especially the Boston Red Sox and the New England Patriots. I collect toys (mostly Transformers but other stuff too), comic books, and Red Sox baseball cards. I watch an obscene amount of television and love going to the movies. I am hopelessly addicted to Wizard Rock and I write Harry Potter Fanfiction, though these days I am working on a couple of different original YA novels.
View all posts by lmb3 →
This entry was posted in Toy Reviews, Toys, Transformers and tagged Buzzsaw, G1, Generation 1, Generation One, Soundwave, Toys, Transformers, Vintage G1, Walmart Exclusive. Bookmark the permalink.