When I first saw the announcement of a tenth anniversary Transformers movie toyline in Japan called “Movie the Best” I assumed that was a bad translation. I mean, really, how stupid a name is “Movie the Best”? Apparently not stupid enough. In any case, I’m only getting the toys with mold changes or added weapons. 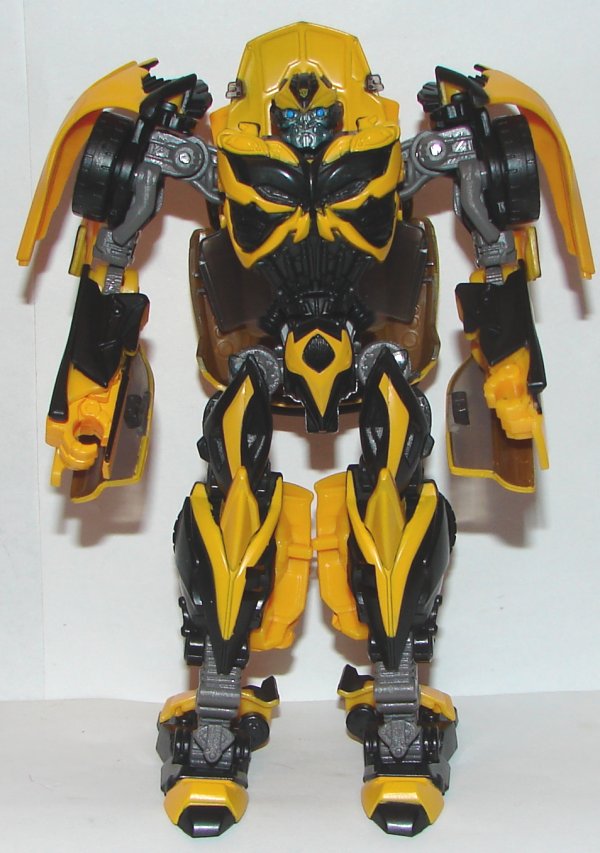 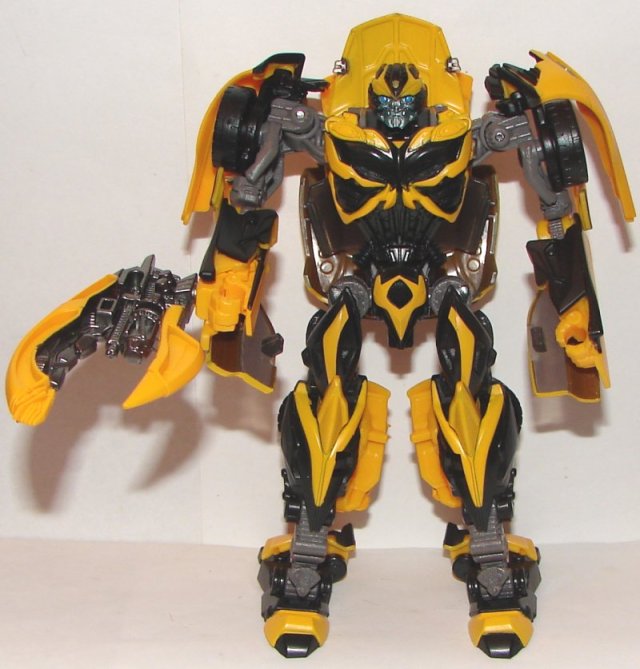 Arm Gun Bumblebee is a repaint and remold of Age of Extinction Bumblebee. His overall color is bright yellow like most of the The Last Knight Bumblebee toys as opposed to the orange-yellow color of the Age of Extinction Bumblebee toys. His paint apps are most similar to the Age of Extinction Platinum Edition Bumblebee, but they failed to continue the striping all the way to his spoiler. He has gray tinted windows instead of blue. He looks pretty good, though I wish they’d put the stripes all he way to his spoiler. In robot mode his paint apps are pretty much the same as Age of Extinction Platinum Edition Bumblebee. He has one mold change. The original toy’s right hand can flip around to a blaster. This one has had that hand/blaster remolded so it now includes a joint that allow you to flip his hand out to the side of his car mode to mount his new weapon in vehicle mode. The new weapon can be held in his hand, or in a new port on his forearm that was added as part of the remold. I’m not really sure why they added that port, since he can hold it in his hand, but I guess that’s why they called him Arm Gun Bumblebee.

Overall: This is a pretty cool toy, but probably only a must for completists.

This is a pretty cool toy, but probably only a must for completists.

I’m 36 years old, and I work in network tech support for a public school system. I am a huge fan of Star Trek, Transformers, Harry Potter, and Marvel Comics as well as numerous other fandoms. I’m a big sports fan, especially the Boston Red Sox and the New England Patriots. I collect toys (mostly Transformers but other stuff too), comic books, and Red Sox baseball cards. I watch an obscene amount of television and love going to the movies. I am hopelessly addicted to Wizard Rock and I write Harry Potter Fanfiction, though these days I am working on a couple of different original YA novels.
View all posts by lmb3 →
This entry was posted in Toy Reviews, Toys, Transformers and tagged Age of Extinction, Arm Gun Bumblebee, Bumblebee, Dark of the Moon, Movie The Best, Revenge of the Fallen, Toys, Transformers, Transformers Dark of the Moon, Transformers Revenge of the Fallen, Transformers: Movie the Best. Bookmark the permalink.