Back in the day, Kid Stuff manufactured books with records, books with cassettes, and other related items. One of these days I want to do a detailed blog on Kid Stuff Transformers items, but recently I picked up a particularly rare one. 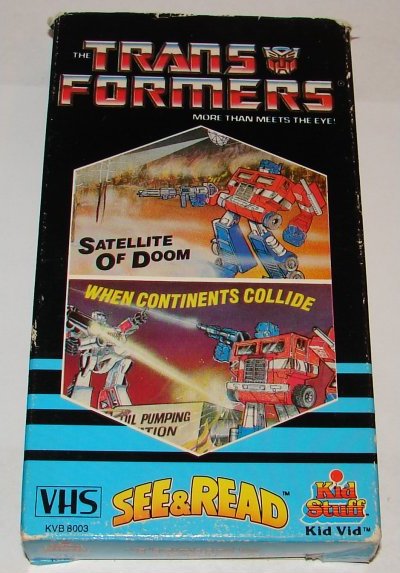 In 1985 Kid Stuff released a VHS version of two their book & cassette stories, Satellite of Doom and When Continents Collide. This cassette is pretty common and easily found on eBay. I wouldn’t pay more than $10 or $12 for a copy and with a little patience you can probably find it cheaper than that. It’s just not that rare. If you want to watch the VHS, it’s broken up into three videos on YouTube below.

In 1986 Kids Stuff released a second VHS, this time with the last two Transformers stories produced by Kid Stuff, Jaws of Terror and Slaves of the Insecticons. (The only Kid Stuff produced book & cassette story that did not get a VHS release is Storms of Destruction.*) The book and cassette of Jaws of Terror is rarer, especially mint in package, than the previous releases, all of which are pretty common. Slaves of the Insecticons is even rarer than Jaws of Terror. It’s the only one I do not have at least one cassette variation of mint in package. (All cassettes came in both white and yellow. I am not aware of any difference between them other than the color of the plastic.) I have been looking for a copy of this VHS a very long time.

* – For clarity’s sake, there were three other stories released by Kid Stuff. Attack of the Decepticons which was released in audio format only, and Battle for Cybertron and The Great Car Rally, both of which were not produced by Kid Stuff, but were adaptations of Marvel Big Looker Storybooks. 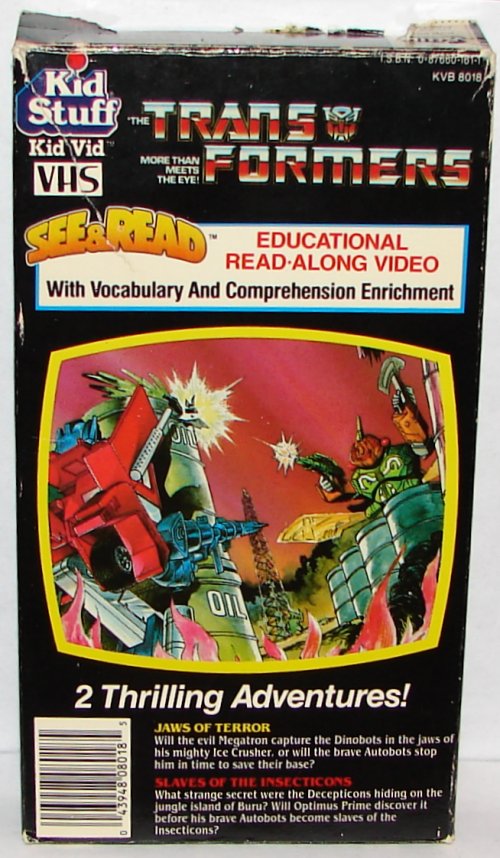 Until I found this on eBay a couple weeks ago, the only one I had ever seen is the photo on TFWiki.net. I paid $14, but I would have paid a lot more. I couldn’t believe my luck. Of course, a week later, another one popped up on eBay. Isn’t that the way it always goes when you’ve searched for something for years? You can watch the video on YouTube below.

This was a particularly great find for me. For a long time I’ve had a list of five Transformers non-toy Holy Grails. This is the second one I’ve found in the last few years, the other being a sealed box of 1986 Transformers: The Movie Ziploc bags. 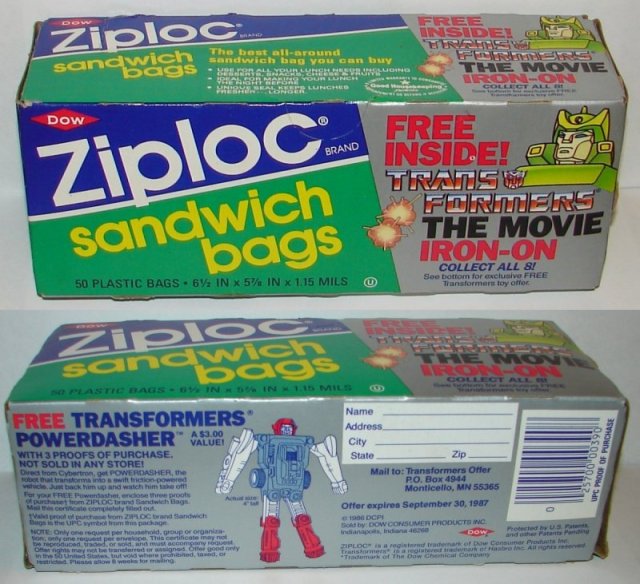 As to my other three non-toy Holy Grails, one is the aforementioned Kid Stuff Slaves of the Insecticons Book & Cassette mint in package, and HG Toys Stamp Bot Roller Stamp Thrust mint on card (or loose), and a Coleco Power Cycle Trailbreaker (AKA Big Wheel) mint in box (or loose). That last one I never expect to find. I at least have a shot at the other two.

As always, you can find over 15,000 Transformers artifacts from every series and generation at TFMuseum.com.

I’m 36 years old, and I work in network tech support for a public school system. I am a huge fan of Star Trek, Transformers, Harry Potter, and Marvel Comics as well as numerous other fandoms. I’m a big sports fan, especially the Boston Red Sox and the New England Patriots. I collect toys (mostly Transformers but other stuff too), comic books, and Red Sox baseball cards. I watch an obscene amount of television and love going to the movies. I am hopelessly addicted to Wizard Rock and I write Harry Potter Fanfiction, though these days I am working on a couple of different original YA novels.
View all posts by lmb3 →
This entry was posted in Transformers, Transformers Artifact of the Week and tagged Generation 1, Generation One, Jaws of Terror, Kid Stuff, Satellite of Doom, See & Read, Slaves of the Insecticons, Toys, Transformers, When Continents Collide. Bookmark the permalink.