Earlier this year McDonalds in Australia released a set of five RID toys. Four of those toys were eventually released in Europe and then more recently in the USA. (Read my review here.) The fifth toy, Drift, was only available in Australia. When they came out, I posted to an Australian TF forum looking for a set and was told they were even hard to find when they came out. With the other four being released later, this left Drift being the only rare one. I bought the only one I’ve seen on eBay. I think it only lasted until I saw it because the seller listed his name as Drfit. 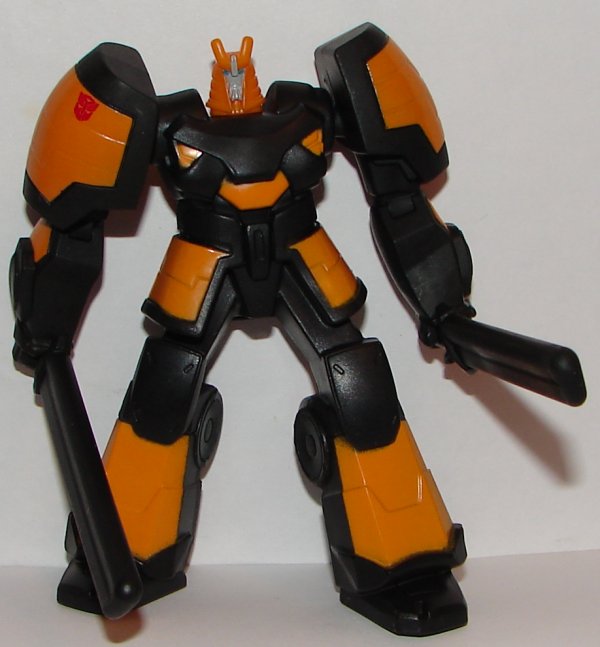 His head is a little small, but otherwise Drift is very cool. He comes with a pair of swords and has pretty decent paint apps for a McDonald’s toy. Pretty cool toy and likely one of the rarest McDonald’s Transformers from recent years.

I’m 36 years old, and I work in network tech support for a public school system. I am a huge fan of Star Trek, Transformers, Harry Potter, and Marvel Comics as well as numerous other fandoms. I’m a big sports fan, especially the Boston Red Sox and the New England Patriots. I collect toys (mostly Transformers but other stuff too), comic books, and Red Sox baseball cards. I watch an obscene amount of television and love going to the movies. I am hopelessly addicted to Wizard Rock and I write Harry Potter Fanfiction, though these days I am working on a couple of different original YA novels.
View all posts by lmb3 →
This entry was posted in Toy Reviews, Toys, Transformers and tagged Drift, McDonald’s, RID, Robots in Disguise, Toys, Transformers, Transformers: Robots in Disguise. Bookmark the permalink.