My Friend Zabgoth’s Thoughts on Hascon

My friend Zabgoth had some thoughts on Hascon that he asked me to post. I guess this makes him my first guest blogger.

When I first arrived at Hascon the top goal was to lock down exclusives, as was everyone’s apparently. I got to the line just as the fire marshal had flipped shit and they had to stop taking newcomers into the line. Staffers assured me that it was being solved. Not even a half hour later they had got out divider ropes and got the line restocked and up to fire code. Kudos. I’m reminded of the disgustingly slow lines of Fun Pub Botcons I attended, and this was far swifter. In the very same center for Botcon 2007 I was given a time of 6pm to pick up my pre registration package. After the better part of an hour for that, the line to grab souvenirs was closed. I never had a chance to get everything in one go. That line wasn’t even close to this. By the time I got to the front and handed over my exclusives form, a staffer personally handled each order and then brought you and your loot to the closest open register of the many around the “boutique”. They streamlined it well. I never saw Fun Pub work half as hard to relieve a line. Although I wish there was more current product in the store, what they did have was priced at a nice 10-25% below retail.

From there while Lewis was at the Stan Lee panel, Hast and I stomped around the Transformers experience and actually met the brand manager himself, just hanging out and staffing the con. He was giving away autograph vouchers on the spot for the original designers Hideyaki Yoke (Yoke san), Takashi Kunihiro, and Shogo Hasui. These men designed massive chunks of my childhood and it was an honor to meet them. In line we also ran into and chatted with an old friend, namely Benson Yee. I’ve been going off and on to Botcons for almost 20 years now and Ben is a constant. It was good too see him still at it after all this time.

From there we went to the Villains panel where I damaged my voice for a few days cheering for BW Megatron as winner. I like to think being the loud super-bastard that I am, I am the reason for the win, but you can hear my mighty bellow in the distance at 28:50 of the YouTube video. Seriously though, hearing Vinnie D’Aleva reminisce about the early days designing Beast Wars was a treat.

After that, a beer break with Narragansett on tap, then back to the TF experience. I swear every time I passed the super screen showing the Bay movies, frigging Shia was on screen. Miscreant as I am, I assumed the Shia crouch and started shouting back quotes from the green screen motivational video, nearby staffers snickered along. It was fun. Getting to screw around with the Titan Class Trypticon on hand was fun as well. A staffer came by to clear the titan master drop tube in its throat as it was jam packed. I was chatting him up about how the size of the G1 when I was a child is relative to this one as the man child I’ve become. He seemed to like that and gave me a bunch of Titan Master crunch posters.

Not much else Transformers related that I did for the rest of the day, but while collecting autographs of a few Magic the Gathering cosplayers for a pal (Christine Sprankle and Ashlen Rose) I was blown away by how gracious they were. A true highlight to the day. In addition, Christine reenacting Diabolic Tutor with Stan Lee is just hilarious. 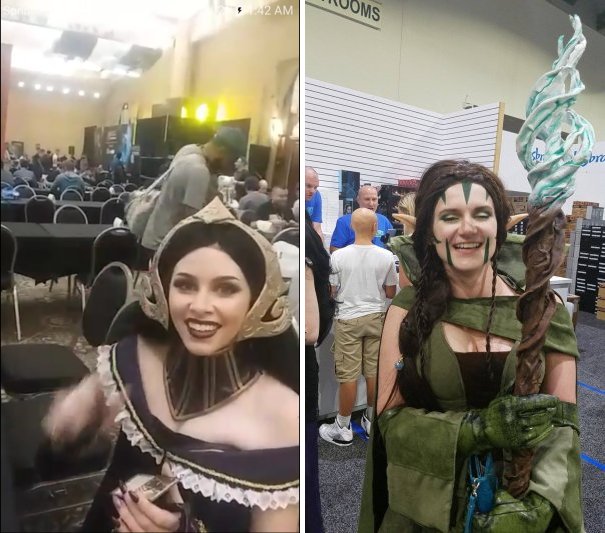 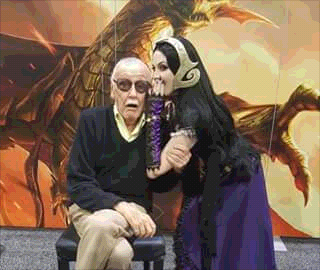 I’m 36 years old, and I work in network tech support for a public school system. I am a huge fan of Star Trek, Transformers, Harry Potter, and Marvel Comics as well as numerous other fandoms. I’m a big sports fan, especially the Boston Red Sox and the New England Patriots. I collect toys (mostly Transformers but other stuff too), comic books, and Red Sox baseball cards. I watch an obscene amount of television and love going to the movies. I am hopelessly addicted to Wizard Rock and I write Harry Potter Fanfiction, though these days I am working on a couple of different original YA novels.
View all posts by lmb3 →
This entry was posted in Toys, Transformers and tagged Hasbro, Hascon, Toys, Transformers. Bookmark the permalink.