I don’t buy a lot of third party toys, but I have always wanted to get some of the combiners.  I couldn’t pass on Maketoys Giant Type-61 for only $100.  He is missing the IDW style head (but it’s IDW, so who really cares) and Scrapper’s engine, but he was still well worth $100.  For the sake of simplicity, I am going to be referring to these guys by their Transformers names.  Here are their Maketoys names in case you care.  They aren’t what I would call creative. 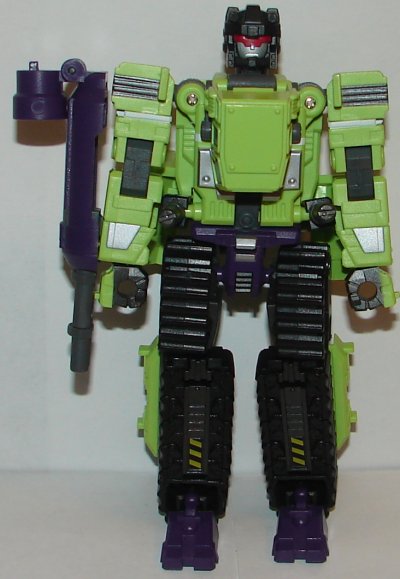 I did not notice until after I took the photos that his blade was on upside down.  I love Bonecrusher’s bulldozer mode.  I like that they went with black for the treads rather than green or purple.  Allegedly his weapon can clip onto the side of the vehicle, but I couldn’t figure out how, and it wasn’t shown in the instructions.  I’m not crazy about his robot mode, but only because Bonecrusher should have his blade reversed on his chest, and they made not effort to make him look like Bonecrusher.  That doesn’t make him a bad toy, but I would have preferred they stuck to a more G1 look.

Long Haul looks great in dump truck mode.  In robot mode, I’m less happy with him.  He’s just not well designed.  There are screw heads all over his chest.  He just doesn’t look very well designed.

Like Bonecrusher, I couldn’t figure out how to attach Scavenger’s gun to the side of his vehicle mode.  Scavenger looks great in both modes.  I’m not crazy about having his scoop on his robot arm, but it doesn’t look bad.  I really like the painted details like the silver on the hydraulics on his arm in vehicle mode.

You’ll notice that Mixmaster has a little trailer.  That is one of Devastator’s forearms and hands.  Scrapper pulls the other.  I think that was a very clever way of incorporating them into the vehicle modes.  Mixmaster is my favorite of the vehicle modes.  My only complaint, and it’s a small one, is that you can’t actually spin his tank.  In robot mode he can carry both of Devastator’s forearms like a back pack.  He also has a door over his head that opens to reveal two missiles.  His robot mode looks great.  He’s probably the best of the set.

Hook has Devastator’s head incorporated into him.  They painted the back of his head green and made it look like the control center for the crane, so it’s not too bad.  He looks pretty good in both modes.  I would mind that his crane arm is removable if not for what he can do with in when combined as Devastator.  More on that later.  I’m not crazy about the green helmet, but other than that his robot mode looks great. 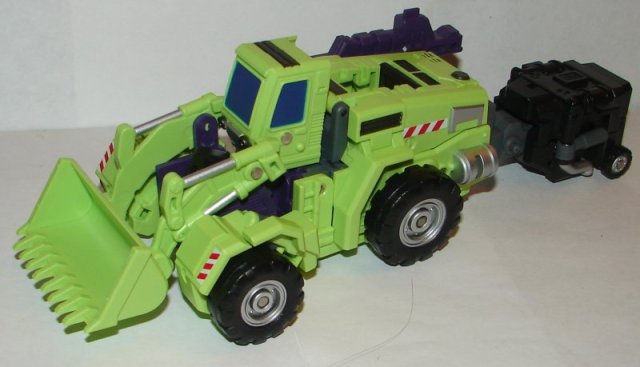 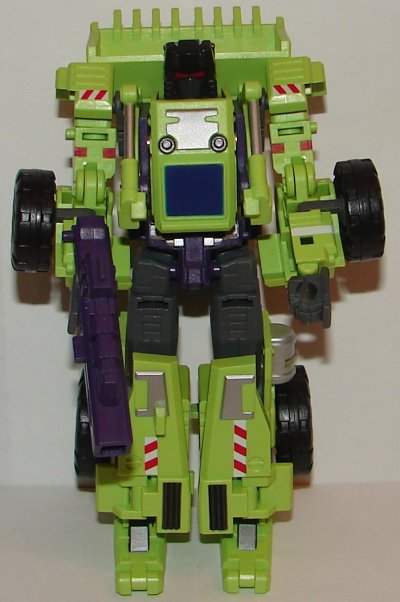 Scrapper has a lot of great painted details.  I am missing his engine that covers the void on the back of his vehicle, but I am trying to get one from Maketoys.  He looks really great in robot mode, though I’m not crazy about the window for his lower chest.  It just looks odd.

Devastator looks awesome!  I kind of like that they reduced the amount of purple on him.  He still has it on his chest and hands, but I think the black looks better.  His gun is made up of the six individual guns.  You can also remove Hook’s crane arm and clip the six guns onto it to create a weapon.  He can also swap out his hands for screwdriver bits.  That’s kind of neat.  You might notice that he is leaning a little to his right.  That is because Scrapper’s engine forms his right heal.

Overall: I can’t recommend anyone pay retail price for these third party combiners.  None of them are worth $400 and $500 each, but for $100 you can’t go wrong.

I’m 36 years old, and I work in network tech support for a public school system. I am a huge fan of Star Trek, Transformers, Harry Potter, and Marvel Comics as well as numerous other fandoms. I’m a big sports fan, especially the Boston Red Sox and the New England Patriots. I collect toys (mostly Transformers but other stuff too), comic books, and Red Sox baseball cards. I watch an obscene amount of television and love going to the movies. I am hopelessly addicted to Wizard Rock and I write Harry Potter Fanfiction, though these days I am working on a couple of different original YA novels.
View all posts by lmb3 →
This entry was posted in Toy Reviews, Toys, Transformers and tagged Bonecrusher, Bulldozer, Constructicons, Devastator, Dump Truck, Excavator, Giant Type-61, Hook, Long Haul, Maketoys, Mixer, Mixmaster, Mobile Crane, Scavenger, Scrapper, Toys, Transformers, Wheel Loader. Bookmark the permalink.