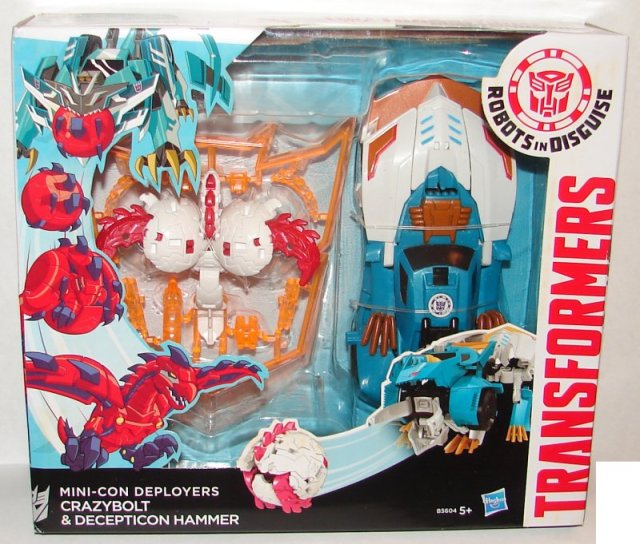 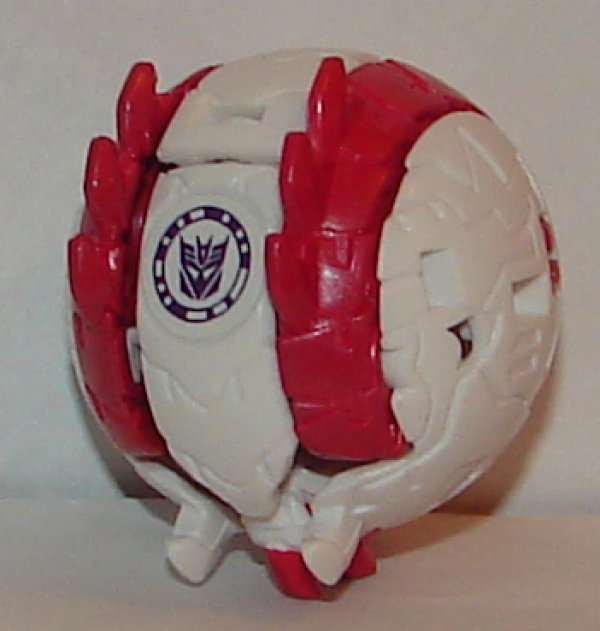 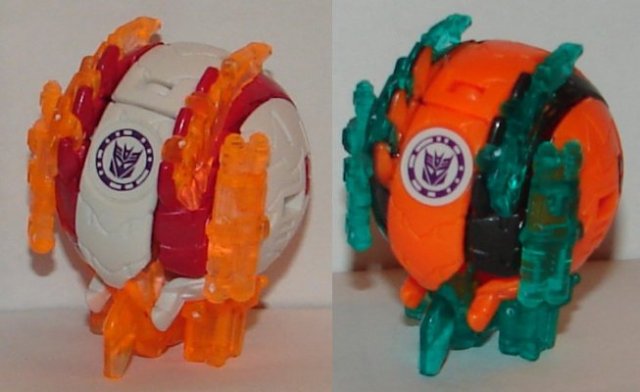 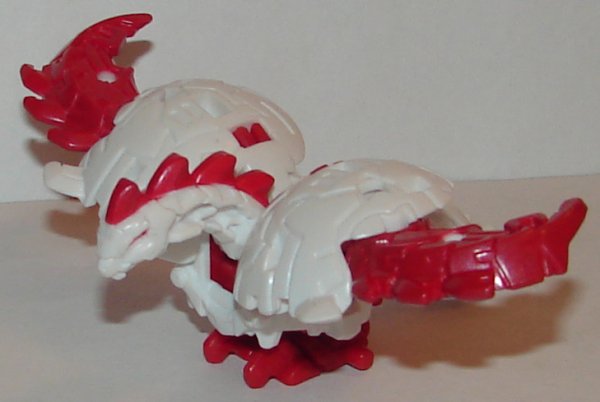 This is the version of this mold.  All were called Hammer.  Read my original review here.  The red, orange, and white color scheme looks pretty good.  He’s still a ball.  No color scheme can improve on that.

Vehicle Mode: I love Crazybolt’s race car mode.  I love the colors and design.  They made a great decision to put his launcher in the back of the vehicle.  Drift and Overload’s vehicle modes suffered from having the launcher in front.  Fracture did it a little better with the sidecar.  Of course we never got Crazybolt in the USA.  Why he wasn’t in wave 2 with Overload and the Blizzard Strike Drift in wave 3, I have no idea.  That would have made sense.

While Crazybolt is great in vehicle mode, in cat mode there are a couple of simple changes that would have been enormous improvements.  First off, you can’t close his mouth.  His lower jaw needs to swing down and under his body so he can launch Mini-Cons, but it doesn’t fold, up far enough.  It’s unfortunate, but not a horrible issue.  The second thing is his tail.  It would be better if the front of the car could fold up rather than just have the wide front of the car front.  Otherwise, Crazybolt is a pretty great toy.

Overall: I was able to get one on eBay from the UK for about $40 shipped.  That was the cheapest one on eBay, and unfortunately, many UK sellers are now using eBay’s Global Shipping Program which is a complete rip off and crazy overpriced.  If you can get one at a price you can live with, I highly recommend him.  Of course, there is always the chance that these will show up at discount stores at some point.

I’m 36 years old, and I work in network tech support for a public school system. I am a huge fan of Star Trek, Transformers, Harry Potter, and Marvel Comics as well as numerous other fandoms. I’m a big sports fan, especially the Boston Red Sox and the New England Patriots. I collect toys (mostly Transformers but other stuff too), comic books, and Red Sox baseball cards. I watch an obscene amount of television and love going to the movies. I am hopelessly addicted to Wizard Rock and I write Harry Potter Fanfiction, though these days I am working on a couple of different original YA novels.
View all posts by lmb3 →
This entry was posted in Toy Reviews, Toys, Transformers and tagged Crazybolt, Deployers, Hammer, Mini-Cons, Minicons, RID, Robots in Disguise, Toys, Transformers, Transformers: Robots in Disguise. Bookmark the permalink.