First announced at Toy Fair 2013, Transformers Constructbots is Hasbro’s answer to Lego Hero Factory as they continue to try and get into Lego’s product categories.  When I first heard about these, I assumed they would be sold under the Kre-O name.  This seemed logical.  However, as they are not being sold under the Kre-O name, I can only assume this is due to the poor sales of Kre-O (as evidenced by Walmart and Target barely stocking Kre-O toys anymore) and Hasbro wanting to make sure that stores at least order the initial waves of these before the line fails completely as I expect it will.

Having said that, I am encouraged by these toys.  While the Triple Changers had a fairly significant flaw (the need to build the robots in two different ways) these Scouts do not this problem. 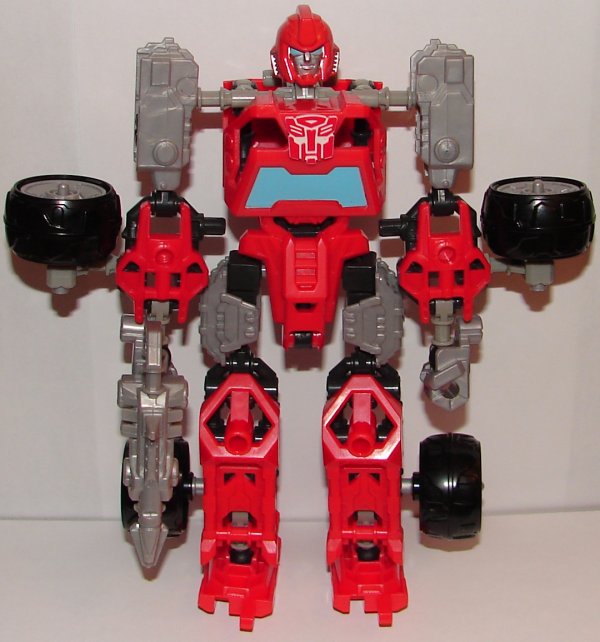 Ironhide has a really nice head sculpt.  His robot mode is pretty cool, but I’m not a fan of the wheels mounted on his arms like that.  His car mode is okay, but I think it’s safe to say that most of the car modes are going to look an awful lot alike with just cosmetic changes on a common frame.  Still, he’s overall decent. 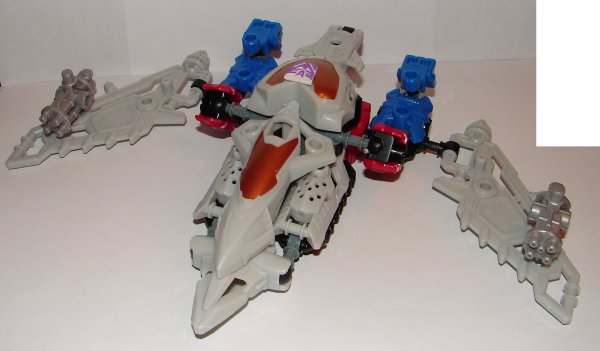 I really like Starscream.  He’s got a nice head sculpt (more on the coloring of his head later).  His jet mode is fantastic (for what it is).  My only complaint is that he looks great in robot mode as long as his arms are at his sides.  I don’t like having his wings connected to his arms.

As you can see above, apparently someone was drunk when painting Starscream’s head.  Only 1/3 of it is properly painted black.  When I saw this, I figured it was just a factory defect.  However, the second one I bought also had the head painted like this.  It appears from what I’ve read online that they are all like this, or at least I haven’t heard of anyone finding a correct one.  In fact, if you look at the pictures from Botcon and SDCC as well as Hasbro’s official photos, they all show it like this too.  I am curious to find out if we will see corrected ones down the road, but it has to be said, Hasbro’s quality control, as well as the actual quality of the toys has taken a nose dive in the last year or so.  It’s really pretty pathetic.

I’m 36 years old, and I work in network tech support for a public school system. I am a huge fan of Star Trek, Transformers, Harry Potter, and Marvel Comics as well as numerous other fandoms. I’m a big sports fan, especially the Boston Red Sox and the New England Patriots. I collect toys (mostly Transformers but other stuff too), comic books, and Red Sox baseball cards. I watch an obscene amount of television and love going to the movies. I am hopelessly addicted to Wizard Rock and I write Harry Potter Fanfiction, though these days I am working on a couple of different original YA novels.
View all posts by lmb3 →
This entry was posted in Toy Reviews, Toys, Transformers and tagged Construct-A-Bots, Construct-Bots, Constructabots, Constructbots, Ironhide, Kre-O, Scout, Starscream, Toys, Transformers. Bookmark the permalink.