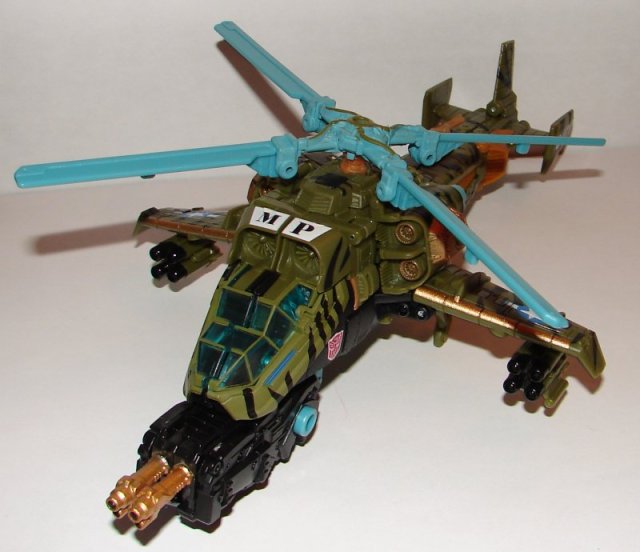 Fun Publications did pick some really great molds to use this year.  (Also some not so great ones.)  Dark of the Moon Skyhammer is one of my favorite toys from the Dark of the Moon line and one of the best helicopter transformers ever.  I say that because he does not have the one major flaw that almost all helicopter transformers do, the rotors.  Most toys either have the rotors hanging off the back or turning into a sword, but Skyhammer’s rotors fold around his torso and lock in place.  It’s an amazing design.

Sandstorm was certainly a good choice for the set.  I would have preferred him in G1 colors, but unlike the seekers, Sandstorm is not as widely associated with a single color scheme.  He really looks sharp and is probably my second favorite toy this year after the Rainmakers.

I’m 36 years old, and I work in network tech support for a public school system. I am a huge fan of Star Trek, Transformers, Harry Potter, and Marvel Comics as well as numerous other fandoms. I’m a big sports fan, especially the Boston Red Sox and the New England Patriots. I collect toys (mostly Transformers but other stuff too), comic books, and Red Sox baseball cards. I watch an obscene amount of television and love going to the movies. I am hopelessly addicted to Wizard Rock and I write Harry Potter Fanfiction, though these days I am working on a couple of different original YA novels.
View all posts by lmb3 →
This entry was posted in Toy Reviews, Toys, Transformers and tagged Botcon, Botcon 2013, Fun Publications, Machine Wars, Machine Wars Termination, Sandstorm, Toys, Transformers. Bookmark the permalink.