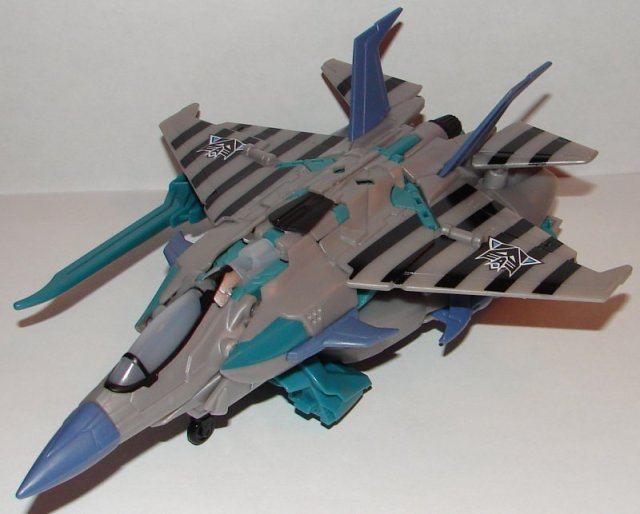 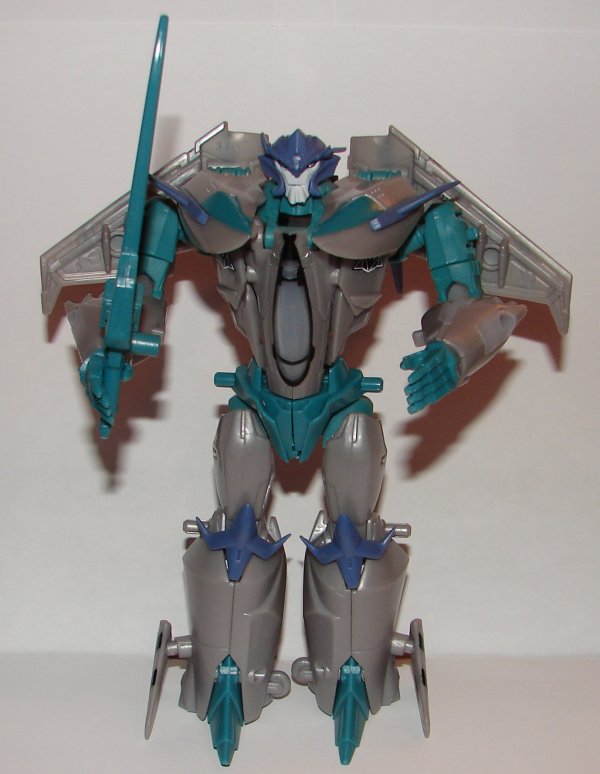 I really like Megaplex’s gray, black, and green color scheme (and yes, I realize his shoulder pads are not transformed correctly).  What I don’t like about this toy is that Megaplex is supposed to be a clone of Megatron, so unless they plan to make a Megatron out of this mold in the future, it just doesn’t work for me.

Also, there is the issue of his gun.  It was not included with the toy.  Promotional images of the toy did not include the gun, but fan sites were told that it would be included.  Additionally, there is a place cut into the foam insert in the box for the gun.  Now, to be fair, his gun, like most Prime Voyager toys’ guns, is complete and total crap.  Still, I certainly expected to receive it based on the information available when I registered.  On principal, we should have received it.

Unfortunately, in addition to the missing gun, Megaplex suffers from some quality control issues. 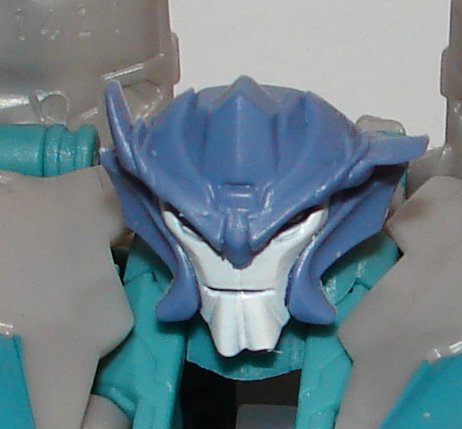 Apparently some (not sure how widespread it is) Megaplex heads are like mine.  One of the tips of his antennae, for lack of a better description, has been bent over.  His head is made of rubber and this was caused because the factory put him in jet mode incorrectly, causing another part to push against the head.  During the long trip from china, the rubber became permanently bent over.  This wasn’t a problem with Skyquake and Dreadwing as they are packaged in robot mode.  I am currently waiting to hear back from the guy I bought my set from about a replacement from Fun Publications.

Update: Fun Publications is replacing my Sunstorm and Megaplex head.  I thought it was only fair to post that.

But wait there’s more, as they say in the infomercials.

They put his feet on the wrong legs.  Now, this one should be easy enough to fix if you’re willing to take screws out of a toy that you paid so much for.  It boggles my mind how these assembly problems happen when they didn’t happen on the retail toys.  Now, I haven’t heard about this online, so it may be that mine is just a random mistake, and of course, Fun Publications is not going to catch errors like these, unlike the Hoist and Electrons assembly errors which seem to be universal.  On the other hand, maybe no one has noticed this, as it really doesn’t affect anything.  I noticed it as soon as I transformed it, but then, I was already looking for problems given the ones I already knew about.

I would rate the figure higher, but with the defective head and feet on the wrong legs, I can’t.

I’m 36 years old, and I work in network tech support for a public school system. I am a huge fan of Star Trek, Transformers, Harry Potter, and Marvel Comics as well as numerous other fandoms. I’m a big sports fan, especially the Boston Red Sox and the New England Patriots. I collect toys (mostly Transformers but other stuff too), comic books, and Red Sox baseball cards. I watch an obscene amount of television and love going to the movies. I am hopelessly addicted to Wizard Rock and I write Harry Potter Fanfiction, though these days I am working on a couple of different original YA novels.
View all posts by lmb3 →
This entry was posted in Toy Reviews, Toys, Transformers and tagged Botcon, Botcon 2013, Fun Publications, Machine Wars, Machine Wars Termination, Megaplex, Toys. Bookmark the permalink.