I noticed an oddity on the box of this one.  In the picture above, note the stickers in the two circles.  The one in circle A has been stuck on flat, but not properly flattened out.  I suppose if you’re preparing the toy for a photo shoot, you might be trying not to mess it up.  However, the one in circle B is simply ridiculous.  The sticker has come loose on one side and is sticking up.  I noticed it as soon as I looked at the box.  I don’t know how they could have messed this up.  (Of course, we’ve seen package and promotional pics of toys that were incorrectly transformed, but I usually expect higher quality on Japanese toys.)  It’s not a huge deal, but I thought it was interesting.

As I have previously reviewed all of these molds, I’ve included links to my original reviews rather than include them all here. 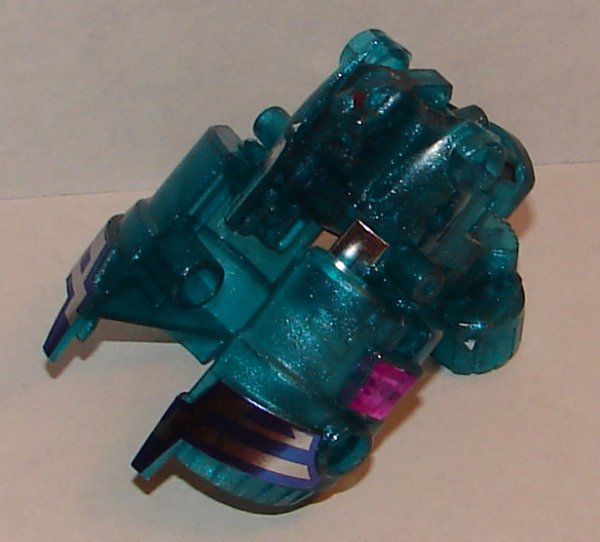 Gul B was previously released in different colors with Starscream.  Read my review here. 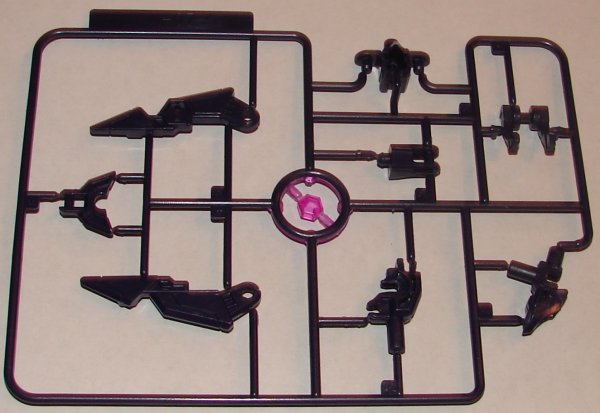 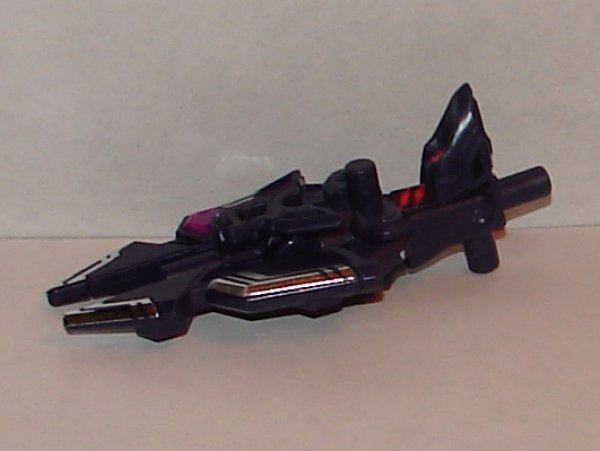 I really like this one.  The dark blue is kind of plain, but it’s not bad.

Zori CS is in a kind of translucent gray.  It’s not completely clear.  I really like the look of this one with the silver and blue stickers.

Ida B was previously released in different colors with Airachnid.  Read my review here. 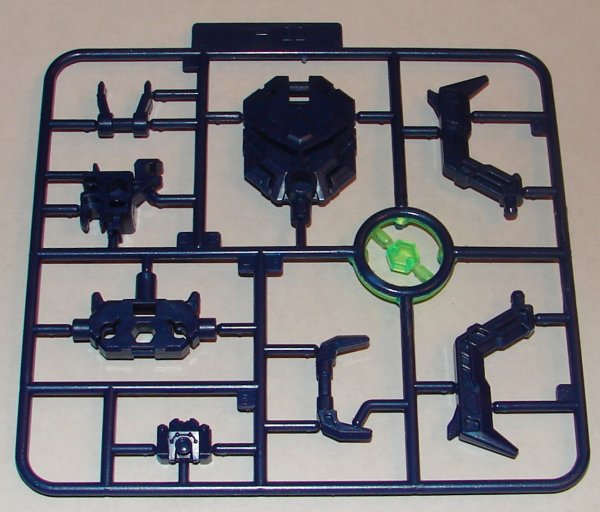 As with Gul B, Ida B is a shade of blue.  The original was black, so it’s not such a huge change.

Noji B was previously released in different colors with Vehicon.  Read my review here. 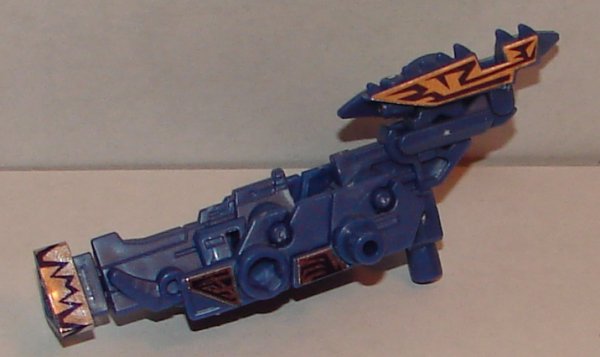 Noji B is, in my opinion, the best of the set.  He’s done in light blue and he’s one of the best animal modes of all the Decepticon Arms Microns.

Weapon Mode: I really like a number of the combined weapons made from three toys.  The problem is, the ones made from five begin to get cumbersome, and start to look a little ridiculous.  This one is pretty decent, but it’s going to be very hard for any toy to hold it without falling forward.  (As a sword, Advanced Star Saber can be held straight up, so if you position most any Voyager’s arms in the right position, you should be able to get a center of gravity that will let it stand.)  The gun is not bad if you don’t mind it being held straight up or with the tip on the ground to help him stand up straight.

Overall: For $25, this is a pretty nice set, even if it’s just to have a bunch more guns to arm your Arms Microns with.

I’m 36 years old, and I work in network tech support for a public school system. I am a huge fan of Star Trek, Transformers, Harry Potter, and Marvel Comics as well as numerous other fandoms. I’m a big sports fan, especially the Boston Red Sox and the New England Patriots. I collect toys (mostly Transformers but other stuff too), comic books, and Red Sox baseball cards. I watch an obscene amount of television and love going to the movies. I am hopelessly addicted to Wizard Rock and I write Harry Potter Fanfiction, though these days I am working on a couple of different original YA novels.
View all posts by lmb3 →
This entry was posted in Toy Reviews, Toys, Transformers and tagged 5-Pack, Arms Micron, Gora, Gora II, Gora II E, Gravity Planet Bowgun, Gul, Gul B, Ida, Ida B, Noji, Noji B, Toys, Transformers, Transformers: Prime, Zori, Zori CS. Bookmark the permalink.