It took a while, but I finally got my hands on a SDCC Generations Fall of Cybertron Bruticus set, and just a week later picked up the retail versions.  I thought it easier to review them together.

Before I get to it, there is something I want to say upfront.  While I am using a G1 Bruticus for comparison purposes, that is not at all a fair comparison.  Generations Bruticus is not meant to be an homage, but his pre G1 form.  Still, can’t help but compare them.  Only a handful of homage toys are actually better than their G1 versions, so I won’t bother to point out that the G1 is better each time.  It simply goes without saying.  🙂 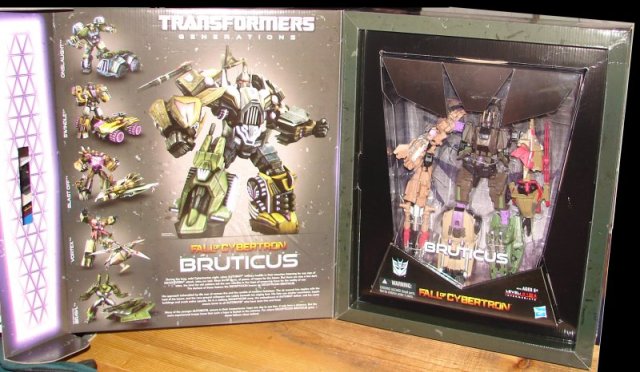 SDCC Packaging:  Hasbro made a big deal at Botcon about the packaging they did for the SDCC Bruticus.  To say the least it is over-packaged.  Essentially they made a vaguely Decepticon logo shaped plastic box with a cardboard base, which was fine, and then put it into an enormous cardboard suit case.  I’d love to know what this would have cost without the huge packaging.  (Actually we do, sort of.  The G2 exclusive from BBTS is only $60.)  Now, the outer box looks really nice, the art on the front is pretty awesome.  We get complete box art in both modes for each toy as well as Bruticus on the inside flap.  No individual tech specs or bios though, which kind of sucks.  The inner box has the same test as the inside flap and toy photos rather than art.  They could have used the art on the inner box and saved having the giant box. 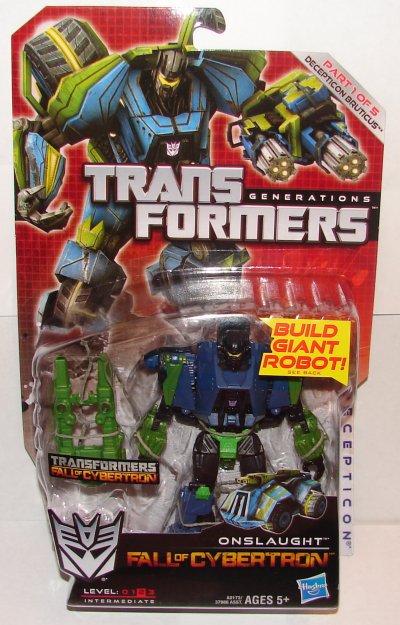 Vehicle Mode:  I don’t really like Onslaught’s vehicle mode.  It’s too compact.   It should be larger or at least longer.  It would have made more sense for the toy to be larger (more on that later). 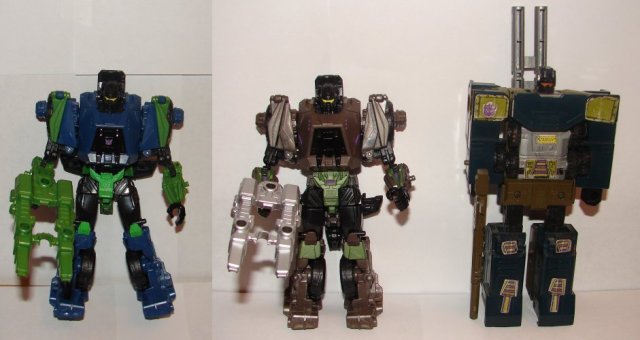 Robot Mode:  He does have a really nice robot mode.  The head sculpt looks a lot like his G1 self.  Even though I like the G1 color scheme, for the Generations FOC toy, I think the retail version has a much nicer color scheme.  It works better on this mold than the G1.

Vehicle Mode:  Unlike Onslaught, Blastoff’s vehicle mode is awesome.  It is a great representation of a Cybertronian space shuttle.  He’s got the cannons on the wings just like the G1.  Again, I think I prefer the retail purple color scheme for this mold.  The SDCC one should have been a darker brown.

Robot Mode:  His robot mode is pretty cool, but his shoulders are a bit large.  They also sit at a bit of an angle, the backs of them spread out a bit to the sides.  It would have been nice if they could sit straight and lock in place.

Vehicle Mode:  I love Vortex’s vehicle mode, but I wish he had guns instead of swords, the swords look stupid on the vehicle.  The coloring on the SDCC version isn’t even vaguely close to the G1 Vortex.  It really sucks that they couldn’t get the colors right after doing such a good job on the rest of them.  The retail color scheme really looks nice.

Robot Mode:  Vortex’s robot mode isn’t bad, but nothing special.  I really wish the rotor blades on his arm could fold down so they are on the side of his arm rather than sticking out from the top. 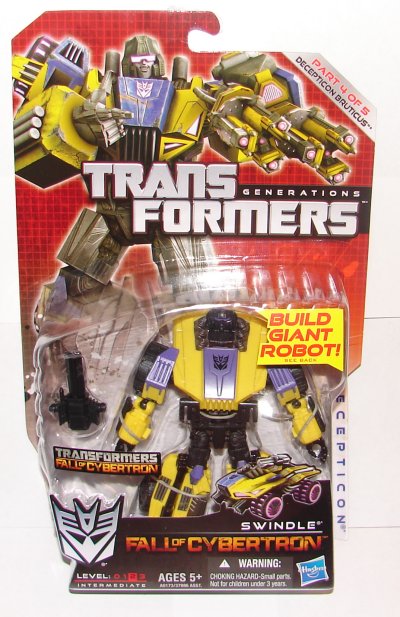 Vehicle Mode:  Swindle’s vehicle mode is more of an armored transport than a jeep, but it’s pretty decent looking.  The color could have been a little darker on the SDCC version..

Robot Mode:  he hood of the vehicle that makes up his shoulders and chest is a bit big, but it’s otherwise nice.  Retail color scheme is again better, thought they should have painted the retail version’s face the way they did the SDCC version.

Vehicle Mode:  Brawl is my favorite vehicle mode of the bunch.  It is probably the closest to the G1 vehicle mode.  This is the only one where I prefer the SDCC color scheme.  The retail version is just a lighter green, and looks nice, but the silver cannons on the SDCC version look much better than the black even if they aren’t as G1 accurate.

Robot Mode:  Bruticus looks pretty great.  I do prefer him in the SDCC colors to the retail.  As you can see, I used Onslaught’s gun on his back with the SDCC version and as part of his handgun for the retail version.  It can be done either way, but I think I like it better on his back.  My only real problem with Bruticus goes back to my issues with Onslaught being too small.  His torso needs to be beefier.  The G1 Bruticus has the big chest shield that takes care of this problem.  I know they wanted to integrate everything, but I kind of wish they had done something like that here.

The arm and leg connectors are basically the opposite of the G1 with Onslaught having square pegs with a square connector that fits over it rather than square pegs fitting into square ports.  I see why they did this.  The connectors on the limbs are made of several pieces, so it has some give to be slid over the pegs and makes it less likely to break.  Now I admit that on the arm joints it gives a more substantial looking shoulder joint.  The G1 has the thin long square pegs connecting the arms, so they sort of stick out from the body with a very small connection.  On the knees though, the G1 connects so it looks like one continuous piece while the new one looks just like the shoulder connections.

While it is not noted in the instructions, the four limbs are interchangeable.  Each one has a leg, right arm, and left arm mode.  This will allow them to reuse the mold, but have them combine in different ways.  As pictures of the repaint (more below) are online, it is possible to figure out how to transform them into the other limbs.

Head Sculpt:  The best part of the entire Generations FOC Combaticons set is the Bruticus head sculpt.  You can’t look at it and not immediately know it’s supposed to be Bruticus.  I like the coloring of the SDCC version better.  The only unfortunate thing is that it needed to be bigger.  The new head is smaller than the G1 on a toy that is considerably taller.  This is an unfortunate result of them incorporating all the combiner parts into the five toys.  I much prefer the G1 way of doing things with separate feet, hands, and head.

A remolded version of Bruticus has already been announced.  It will not be any of the original G1 combiners, but the Wreckers who combine into Ruination.  Ruination (which was of course the name of Bruticus in Robots in Disguise and Car Robots) will be made up of Autobot Wreckers, Roadbuster, Whirl, Topspin, Twin Twist, and Impactor.  They will all have new heads, and apparently new weapons.  The official Hasbro pictures show them all having both the original weapons and new ones.  I’m really looking forward to that, I just hope we will get some completely new mold combiners next year.  I would hate to just see them remold these again.  If they do another set, my guess is it would be Defensor, as he would have far more repaint possibilities than Superion or Menasor.

I’m 36 years old, and I work in network tech support for a public school system. I am a huge fan of Star Trek, Transformers, Harry Potter, and Marvel Comics as well as numerous other fandoms. I’m a big sports fan, especially the Boston Red Sox and the New England Patriots. I collect toys (mostly Transformers but other stuff too), comic books, and Red Sox baseball cards. I watch an obscene amount of television and love going to the movies. I am hopelessly addicted to Wizard Rock and I write Harry Potter Fanfiction, though these days I am working on a couple of different original YA novels.
View all posts by lmb3 →
This entry was posted in Toy Reviews, Toys, Transformers and tagged Blastoff, Brawl, Bruticus, Combaticons, Fall of Cybertron, Generations, Onslaught, San Diego Comic Con, SDCC, Swindle, Toys, Transformers, Transformers Generations, Vortex. Bookmark the permalink.