My Big Bad Toy Store exclusive Transformers Generations Fall of Cybertron Generation 2 Bruticus box set came in this week.  I have previously reviewed both the San Diego Comic Con 2012 and Retail versions of this toy so I’m going to focus on the box and recolor.  I suggest you read the other post here for details on the mold itself. 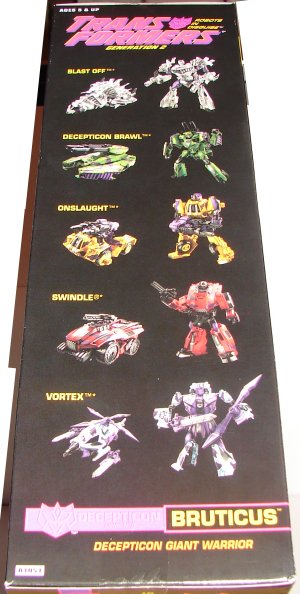 Packaging:  WOW!  WOW!  WOW!  The packaging for this toy is awesome.  It looks like it came right off the shelves in 1992.  It is 1000000000% better than that over thought monstrosity they did for SDCC.  He even has a G2 style Tech Spec card on the back, though it would have been nice if they had cards for the individual members.

Toy: Hands down this is the best version of this toy.  Its paintjob is as faithful to the original as I think could be possible.  They got this one right where they failed on the SDCC version.  These are my favorite versions, the one caveat to that being that I still love the silver guns on the SDCC version of Brawl.  It also helps that this version is $60, where as you’ll pay $200-$300 for the SDCC version.  Even the Retail version (if you can find it) will be $75.