Just got these in the mail yesterday.  I have both the original G1 versions of these guys as well as the reissue Soundblaster.  However, I don’t have any of them handy, so I can’t do a detailed comparison.  I’m sure a lot of people will be doing that anyway.

Soundblaster with Enemy, and Wingthing, and Twincast with Stripes and Nightstalker

The boxes are both nicely down in the G1 style, but it is the art on the box and trading cards that I find most interesting.  I’ll take them one at a time.

Enemy:  Enemy is a straight recolor of the original Rumble (red for those of you, who like me say the blue one is Rumble) box art.  More on the coloring and name later.

Wingthing: They took the original Ratbat box art, mirrored it and repainted it (thought they got his head coloring wrong).  They also tipped it slightly.  More on the coloring and name later.

Twincast: Just as they did with Soundblaster, Twincast has tape door open and closed versions of the box art.  They used the tape door open version, removing Steeljaw.  They also recolored his face to match the toy with a gold face instead of silver and blue eyes instead of red eyes.

Stripes: Here is where the box art changes get really interesting.  They did a weapon swap with the original Ravage and Steeljaw molds, so the art had to be changed to reflect the different weapons, making it more than just a recolor like Enemy and Wingthing.  As previously mentioned there is a tape door open version Twincast’s art that includes Steeljaw.  They transplanted Steeljaw’s weapon from that picture onto the Ravage art and recolored the whole thing (also mirroring the weapon tip seen over his back.  It’s quite seamless, but definitely a transplant and not a new drawing.  Compare them and you’ll see what I mean. 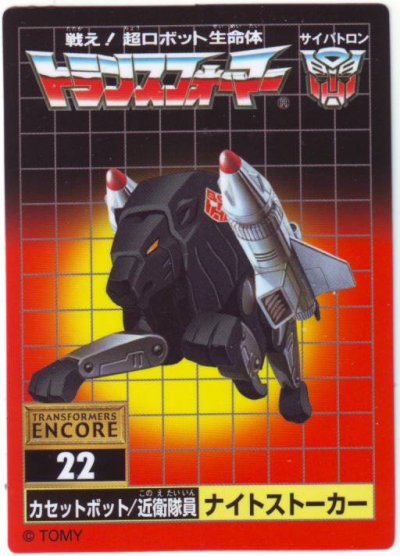 Nightstalker: Initially, I thought they drew a new picture of the toy and transplanted Ravage’s weapons from his original box art.  However, as a friend of mine pointed out, it looks more like they took Ravage’s original box art and drew the new Nightstalker art over it (also mirroring the tip over his back as with Stripes).  If you compare them, you can see that their legs are in the same approximate positions.  I guess they couldn’t just transplant Ravage’s weapons.

So, its kind of cheep that they didn’t do tape door closed art for Twincast and Soundblaster, but over all they put a lot of thought into this.  Nicely done.

To see the original versions of the art mentioned above, visit Botch’s Transformers Box Art Archive. 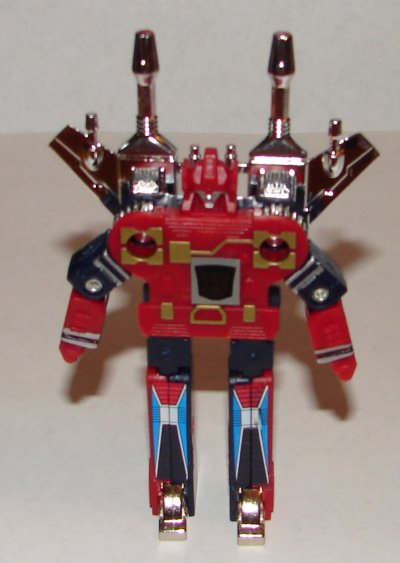 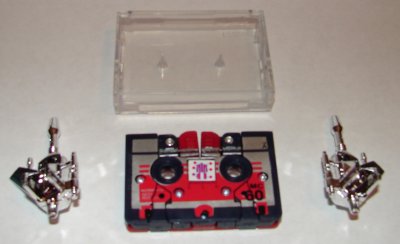 Enemy: Based on a 1984 Transformers radio (seen here).  It has a molded plastic Decepticon robot cassette that can sort of be transformed.  It is the same red and blue color scheme and the name on the box is “Enemy”.  Very neat.

Wingthing:  He is named for Action Master Soundwave’s partner, who was a black and orange bat-like creature.  A nice homage.

Nightstalker: He is a straight repaint of the original Steeljaw mold.  However, in a surprising move, they swapped weapons with the Ravage mold.  The coloring works better, gold with orange and silver with black.  It is interesting that they didn’t just change the color of the weapons, but I like that they did. 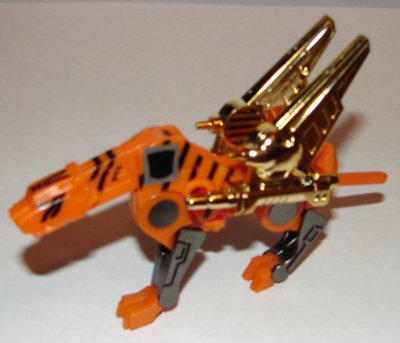 Stripes: The best of the repaints by far.  He looks great in black and orange with Steeljaw’s gold weapons.

Sounblaster and Twincast: Accept for Twincast’s previously mentioned face and eyes, they seem to be just like their original incarnations.  However, all the parts that were formerly stickers are now tamoped on, with a few exceptions where they go over screws, but even those are factory applied.  They look great, but it does bring up the question.  Prior to the release of Devastator, most toys were a mix of tampos and sticker sheets, the one exception being Skylynx who had no tampos.  Then we had Devastator, who had no tampos at all.  Now we have theses guys who are mostly tampos and whose only stickers are factory applied.  A little consistency would be nice, but probably too much to ask for.

The only other thing of note is that one of Enemy’s feet was put in backwards on mine.  I had to take out the screw, pry it apart, and turn it around.  Not a horrible problem, but it continues the trend of poor quality control on G1 reissue toys.  You can read about the issues I had with the Constructicons and Predacons gift sets here.

Over all, I’d say these toys are well worth it if you’re really into G1 toys.  The tampo versions of Soundblaster and Twincast are awesome, and much cheaper than the originals.  The cassettes having new paint jobs is a great bonus.  I hope they continue this.

Here we have a 1986 Collegeville Costumes Face-Lift mask Metroplex.  I also have a Silverbolt mask of the same brand.  Nice item.  I haven’t seen many of these.  I’d love to know how many different ones they made.  You can find these and over 7500 other items at TFMuseum.com.

I’m 36 years old, and I work in network tech support for a public school system. I am a huge fan of Star Trek, Transformers, Harry Potter, and Marvel Comics as well as numerous other fandoms. I’m a big sports fan, especially the Boston Red Sox and the New England Patriots. I collect toys (mostly Transformers but other stuff too), comic books, and Red Sox baseball cards. I watch an obscene amount of television and love going to the movies. I am hopelessly addicted to Wizard Rock and I write Harry Potter Fanfiction, though these days I am working on a couple of different original YA novels.
View all posts by lmb3 →
This entry was posted in Toy Reviews, Toys, Transformers, Transformers Artifact of the Week and tagged Enemy, Nightstalker, Soundblaster, Stripes, Toys, Transformers, Transformers Encore, Twincast, Wingthing. Bookmark the permalink.