Blog #17: Movie Review: Pirates of the Caribbean: On Stranger Tides – Question: Who are Randy Savage, Jack Sparrow, and Thor?

Answer: Three people who have nothing to do with each other that are all talked about in this blog.

Last Friday morning, legendary WWF superstar, Intercontinental Champion, and two-time World Champion, “Macho Man” Randy Savage (whose real name was Randall Mario Poffo) was killed in a single car accident.  It is believed that he had a heart attack while driving, an unceremonious three count for such a great legend of the squared circle.

I don’t follow professional wrestling anymore, but I was a big fan of the WWF when I was a kid.  Admittedly, when I was finally forced to acknowledge that it was all fake (and it probably took me longer than it should have) it lost it’s luster, and I moved on to other interests.  For a long time though, I looked forward to each and every event.

While he made a number of television and movie appearances, the one I’ll always remember is when he was “Bonesaw McGraw” in the first Spider-Man movie.

While I don’t wish to tarnish his memory, it seems pretty clear that substance abuse of one kind or another is likely at least a contributing factor to his death at the age of 58.  Let’s hope that those who are old enough to remember the “Macho Man” in his prime will see his death as a cautionary tale, and not just another story about a celebrity consumed by their demons and addictions.  Fame does not protect one from their follies, as has been proven over and over.

Okay, I’m getting off my soapbox.

I have many wonderful memories of watching “Macho Man” and even though I no longer follow wrestling, I’ll never forget those hours I spent cheering, even if it was all fake.  Whenever I hear “Pomp and Circumstance”, I always think of those days and the “Macho Man” flying from the top turnbuckle and landing an elbow before getting the three count.

Now, on to less depressing items.  Here is the Transformers Artifact of the Week: 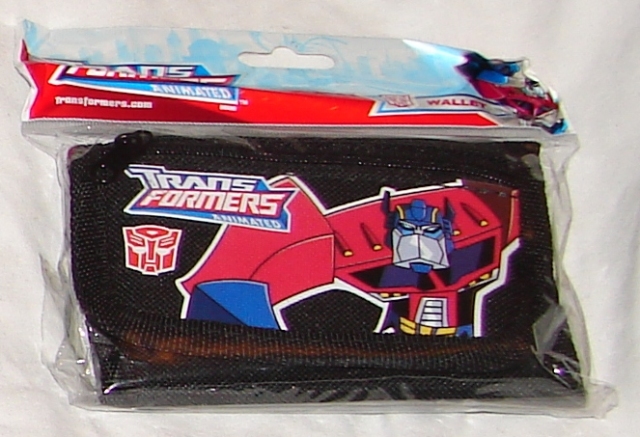 This is one of a number of Transformers Animated wallets I have.  I’ve gotten many TFA items online, but have seen relatively few in stores, even back when TFA was still running.  If you’re a big TFA fan, go online for merchandise like this, you’ll find quite a bit.  This and 7000+ other Transformers items can be found on my website, TFMuseum.com.

Lastly, this weekend I saw Pirates of the Caribbean: On Stranger Tides.  First let me say, I haven’t watched the first three movies in a long time, so it’s hard to compare this one to the previous films, but I really enjoyed this fourth adventure of Captain Jack Sparrow.  I highly recommend it.  If you see it, stay until the very end of the credits.  It’s a very short bit at the end, but seems like it could be very important.

I have been quite disappointed that I have not been able to find a Pirates of the Caribbean Lego Black Pearl.  Now that I’ve seen the movie I understand why.  Early in the movie we find out that Captain Barbosa lost the Black Pearl (along with his leg) so it’s not in the movie (and neither is his leg).  It felt odd to me that Barbosa had become a privateer, but it made a lot more sense once we find that he was only doing it to get revenge of Black Beard for sinking the Black Pearl and taking his leg.  I wasn’t all that shocked to find out that the Black Pearl has not been lost, and find it interesting that Jack has regained the Black Pearl (sort of, it’s still in a bottle when the movie ends) while Barbosa is now in command of Black Beard’s magically controlled ship, The Queen Anne’s Revenge.  I think we’ll be seeing them both again in the next installment, but whether they be friend of foe, is anybody’s guess.  Arrgh!

My only other comment is this.  Did anyone NOT KNOW that the mermaid’s tear wasn’t in the cup that Jack said it was in?  Come on, that was too obvious.  There had to be a better way to do this.  He should have put the in the right cup, and have Black Beard sure he was being double-crossed.  Then of course, it’s Jack who would have had the last laugh.  Still obvious, but I think it would have been better that way.  A small thing really, since you knew she had to live and Black Beard had to die.

The skeletal hand reaching out of the water looked AWESOME!

Now, a couple of weeks back when I reviewed Thor, I didn’t give you any thoughts containing spoilers, and I do have a few random ones.

The Rainbow Bridge was AWESOME.  I was a little worried that the Rainbow Bridge, an actual rainbow as drawn in the comics, would look silly in the movie.  What they did was just plain awesome.  The bridge looks like gold and brown crystal or quartz with flashes of color inside.  A really nice effect giving it the “rainbow” aspect while not looking at all cheesy.

Sir Anthony Hopkins was wonderful as Odin.  I wasn’t really sure he would pull it off.  Hopkins doesn’t come off as a large imposing figure, but they did a good job making him look like he was, and he certainly pulled it off.

I loved the appearance, brief as it was, of Hawkeye.  I was in a theater full of nerds who all went “WOW” when Agent Coulson said “Barton”.

My only real complaint is that Volstagg was about two hundred pounds underweight. 🙂

I didn’t mind the changes, Jane Foster being an astronomer instead of a medical doctor.  I am glad they didn’t go with a human alter ego, but still had him called Donald Blake.

There was plenty of comedy moments without it sounding silly, like when Thor walks out in front of the car and the driver screams something like, “get out of the way you damn ass” and Thor just ignores him and walk away.  The coffee cup smashing, Jane and her friends heading out to find him and running him over again, it just goes on and on.

The teaser at the end for Avengers was great, but you have to stay for the very end.  I think the Cosmic Cube and Loki is a good plot for Avengers.  I’m glad Nick Fury put in an appearance, however brief.

They really did a great job on this movie.  I can’t wait for Captain America and Avengers!

I’m 36 years old, and I work in network tech support for a public school system. I am a huge fan of Star Trek, Transformers, Harry Potter, and Marvel Comics as well as numerous other fandoms. I’m a big sports fan, especially the Boston Red Sox and the New England Patriots. I collect toys (mostly Transformers but other stuff too), comic books, and Red Sox baseball cards. I watch an obscene amount of television and love going to the movies. I am hopelessly addicted to Wizard Rock and I write Harry Potter Fanfiction, though these days I am working on a couple of different original YA novels.
View all posts by lmb3 →
This entry was posted in Comic Books, Miscellaneous, Movie Reviews, Movies, Transformers, Transformers Artifact of the Week and tagged Everything Else, Movies, Pirates of the Caribbean: On Stranger Tides, Randy Savage, Thor, Toys, Transformers. Bookmark the permalink.

1 Response to Blog #17: Movie Review: Pirates of the Caribbean: On Stranger Tides – Question: Who are Randy Savage, Jack Sparrow, and Thor?