Vehicle Mode: Fasttrack’s vehicle mode is awesome He’s a perfect update to G1 Fasttrack. He’s got great paint apps that the G1 should have had.

Weapon Mode: Fasttrack’s spear mode is fine. The real problem is that he didn’t come with Scorponok. I was mostly okay with Weaponizers Cog, Sixgun, and Brunt not being included with Fortress Maximus, Metroplex, and Trypticon.Don’t get me wrong, they should have been, but they were not necessary for them to transform properly into either mode. Full-Tilt was included with Trypticon because he formed his chest. I think a weapon is no less critical than a chest. Fasttrack needed to be included with Scorponok, or Scorponok should have included his gun, in which case this wouldn’t bother me so much. 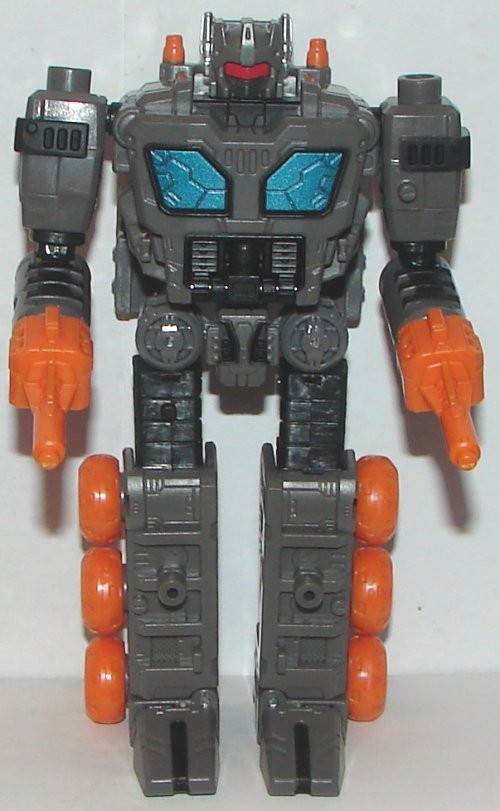 Robot Mode: Fasttrack looks great in robot mode. Even though the original didn’t have it, I love the metallic blue outlined with black on his chest. He has a great head sculpt and I love the red visor. He has a short sword, probably more or a knife. Likely this was only included because it was necessary to be the point of the spear.

Weaponizer Mode: Pictured in the instructions is a Weaponizer mode for Fasttrack, a pair of shoulder cannons and bladed shield.

Overall: Fasttrack is pretty great, but I would like him even more if he were included with Scorponok. Also, and this is really nitpicky, they made Full-Tilt a headmaster, there was really no reason not to make Fasttrack one.