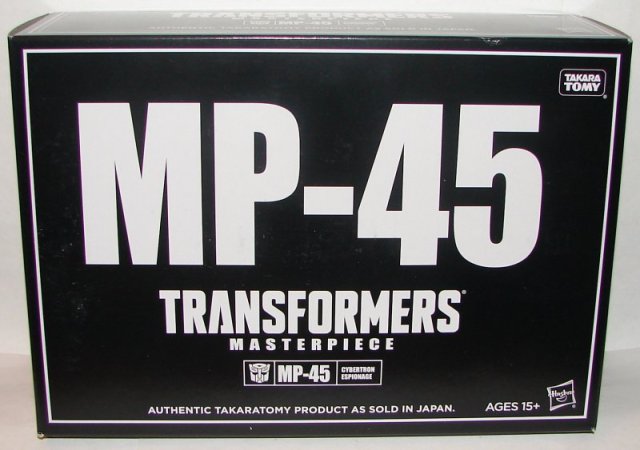 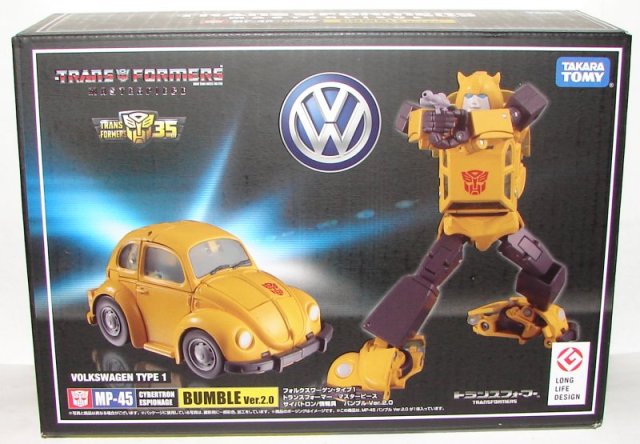 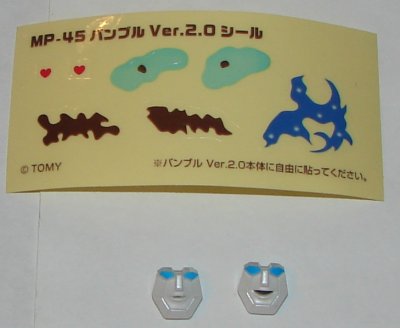 Bumblebee has two additional faces, a sticker sheet, and comes with a disturbingly faceless Spike figure. Per usual, Spike’s legs pop off easily.

Comparison photos with original Masterpiece Bumblebee. It is a completely different mold. 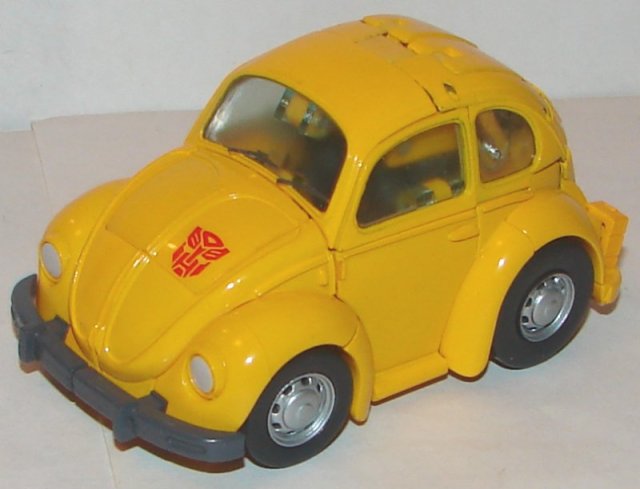 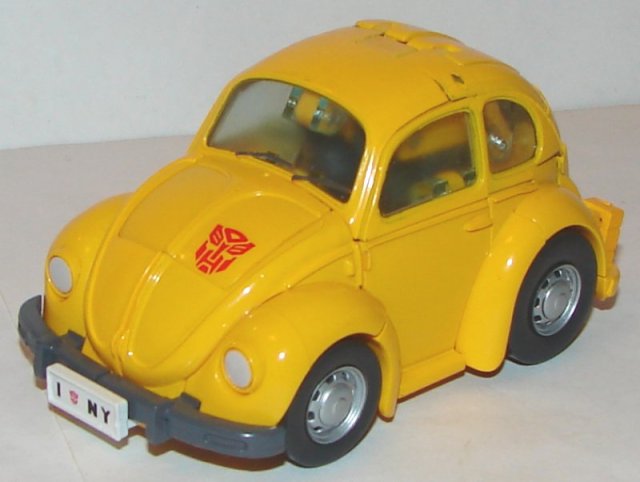 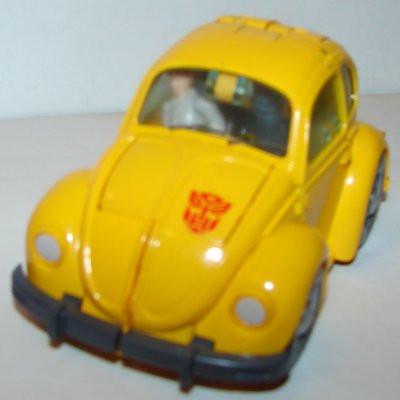 Vehicle Mode: Bumblebee is very accurate to both the G1 cartoon and the G1 toy, which is to say, not much like a real VW Bug. I loved that the original version looked like a real VW Bug, but if you want accuracy, then this is the better of the two. The Spike figure can go inside, but you can’t put him in through the door. You flip his roof, windshield, and hood forward. The inside is not really designed to fit Spike. There s no seat, and I couldn’t get him sot sit straight in mine, he just kept flopping over. If they weren’t going to put a seat in there and make it so you could open the door to put him in, then it was pretty pointless to include the Spike figure at all. 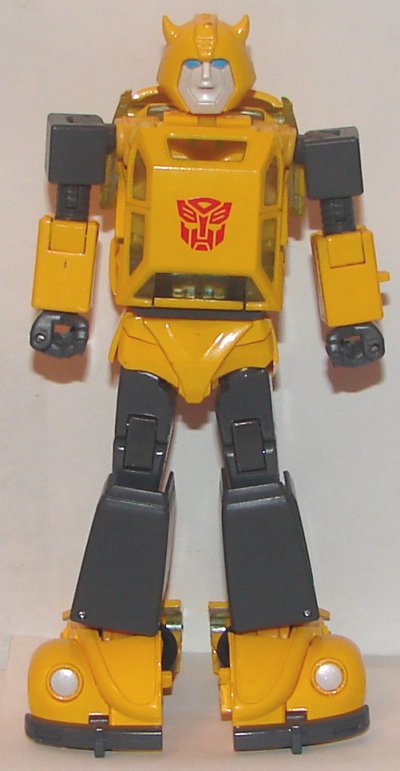 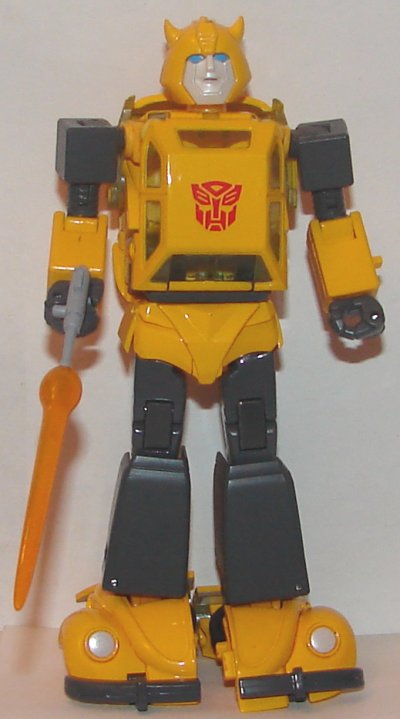 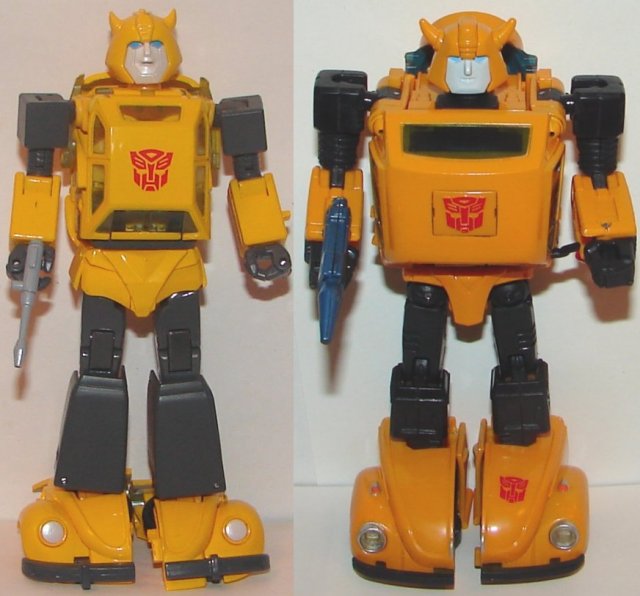 Robot Mode: Again, Bumblebee is 100% more cartoon accurate in robot mode. Obviously not so much accurate to the toy, but I think we can all agree that’s okay. I hear a lot of people complaining that he has a “backpack” of vehicle mode parts. Those parts have to go somewhere. He’s a pretty small toy. He’s not like MP-44 Optimus Prime who can have vehicle parts fold up into his legs. I think they did an amazing job getting as much as the did to fold up into such a small space.

Overall: I really like the original Masterpiece Bumblebee. I love that it turns into a realistic VW Bug, but there is no question that this is the better toy all around. But is it better for the price? Not even close. The original came with Spike in his exosuit, which was awesome. This Spike figure is a near irrelevant footnote. It’s also incredibly overpriced. They are charging $120 for a toy that is worth maybe $75, and that’s being generous. I would recommend waiting for them to go on clearance, and I’m sure they will. I think a lot of people are going to pass on these new super expensive Masterpiece toys.

I’m 36 years old, and I work in network tech support for a public school system. I am a huge fan of Star Trek, Transformers, Harry Potter, and Marvel Comics as well as numerous other fandoms. I’m a big sports fan, especially the Boston Red Sox and the New England Patriots. I collect toys (mostly Transformers but other stuff too), comic books, and Red Sox baseball cards. I watch an obscene amount of television and love going to the movies. I am hopelessly addicted to Wizard Rock and I write Harry Potter Fanfiction, though these days I am working on a couple of different original YA novels.
View all posts by lmb3 →
This entry was posted in Toy Reviews, Toys, Transformers and tagged Bumblebee, Masterpiece, Masterpiece Bumblebee, MP-45, Toys, Transformers, Transformers Masterpiece. Bookmark the permalink.