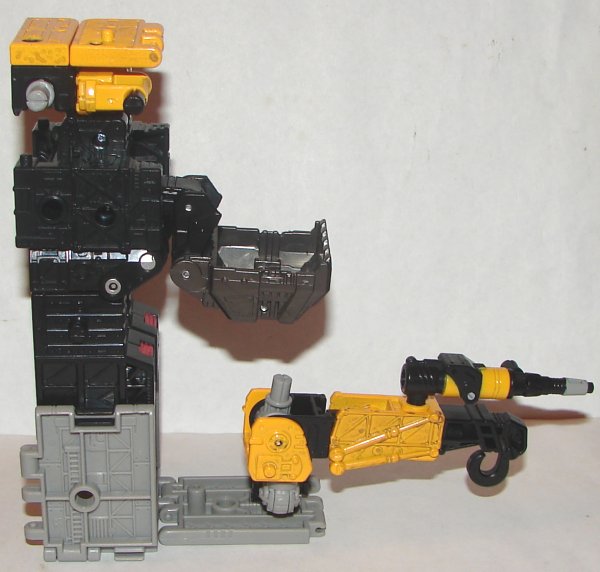 Base Mode: The original G1 Ironworks was actually the Micromaster who came with the Micromaster Construction Station on which Earthrise Ironworks is actually based. The station had two base modes, a construction site and an armed communications tower. The promotional photos of Ironworks included a photo of the communications tower, which does not include a radar dish. However, the communications tower mode is not included in his instructions, and is there for not official (as far as I’m concerned). They probably omitted it after realizing that without the radar dish it looks stupid. His construction site mode is actually pretty cool. His instructions do include another mode, pictured above, though I have no idea what the hell its supposed to be. It has connectors for three other bases to connect to.

Robot Mode: The original Construction Station had no robot mode, but Ironworks does, and he looks pretty awesome. He is pictured with his gun on his shoulder pointing up, but he can hold it in his one hand.

Modulator Mode: Hasbro is calling these Micromaster Bases “Modulators”. Obviously this is because of their modular construction. They can’t call them Weaponizers anymore, as they, or at least Ironworks, has few weapons. Unfortunately, as armor, Ironworks kind of sucks. Other than the gun of his crane, he’s just parts slapped on to larger robots with little functional use.

Overall: They are certainly starting Earthrise off right. The Modulator gimmick as armor sucks, but the base mode is awesome (not the unofficial tower mode with no radar dish). He looks great in robot mode, so if the Modulators are all this cool, they will be a welcome addition to the line.