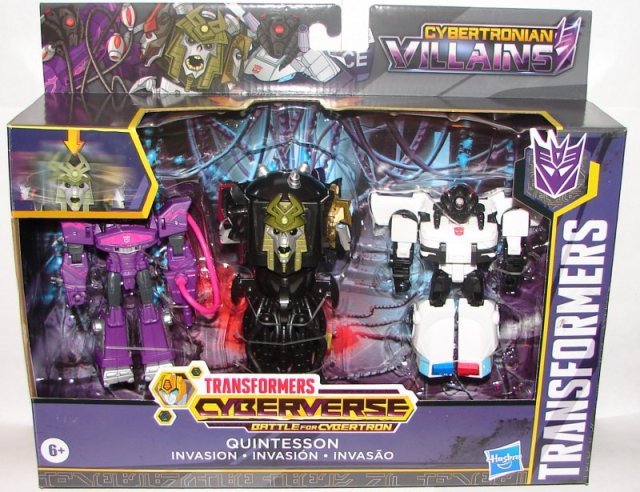 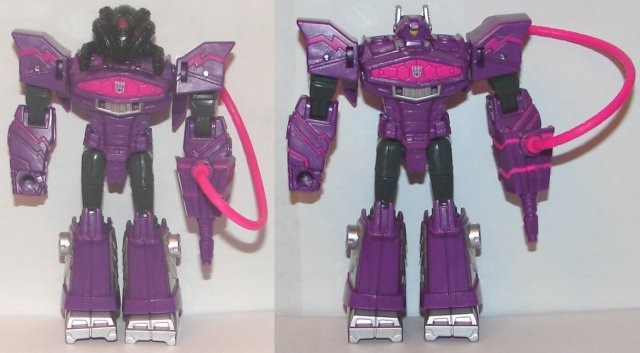 Prowl and Shockwave are identical to the Spark Armor Battle Class Prowl and Shockwave (read my reviews here and here) without their armor/vehicle. The set comes with two helmets that I presume are used to enslave them. I do not believe the Quintessons have shown up on the cartoon yet, though they were mentioned once, so it’s kind of a guess what these helmets do, but it seems to be a logical assumption. I believe these helmets are compatible with all the Spark Armor Battle Class toys. 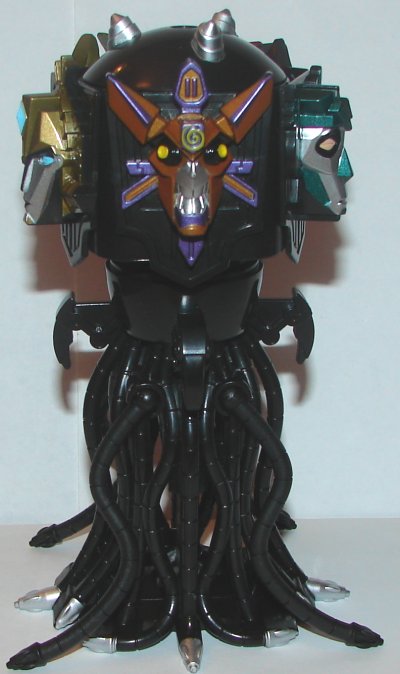 The Quintesson Judge does not transform. Four of his tentacles can be moved on ball joints, but the rest of them are one solid piece. If you push down on the top of his head the faces spin around. The judges faces are not identical to the G1, but I am guessing they are (in order of the pictures above) Death, Rage/Wrath, Bitterness/Wisdom, Laughter/War, and Doubt/Judgment. (Please refer to this article on TFWiki for more info on why most of them have two names.) I may be wrong on some of those. Death is obvious, and I’m 99% sure on Rage/Wrath, but the others are quite a bit different from the G1. We likely won’t know for sure what the faces names are supposed to be until the Quintessons show up on the cartoon next season.

Overall: I find this set overprices at $30. With their armor/vehicle, Prowl and Shockwave retail for $15. Even if they were worth $10 without it, which I think is too much, the Quintesson Judge is not worth $10. It’s nothing new for the prices on exclusives to be jacked up. It’s not a bad set, but I wish the Quintesson looked more G1. It would have been nice to have his faces identified on the box too.

I’m 36 years old, and I work in network tech support for a public school system. I am a huge fan of Star Trek, Transformers, Harry Potter, and Marvel Comics as well as numerous other fandoms. I’m a big sports fan, especially the Boston Red Sox and the New England Patriots. I collect toys (mostly Transformers but other stuff too), comic books, and Red Sox baseball cards. I watch an obscene amount of television and love going to the movies. I am hopelessly addicted to Wizard Rock and I write Harry Potter Fanfiction, though these days I am working on a couple of different original YA novels.
View all posts by lmb3 →
This entry was posted in Toy Reviews, Toys, Transformers and tagged Bitterness, Cyberverse, Death, Doubt, Judge, Judgment, Laughter, Prowl, Quintesson Invasion, Quintesson Invasion Box Set, Quintesson Judge, Rage, Shockwave, Toys, Transformers, Transformers Cyberverse, War, Wisdom, Wrath. Bookmark the permalink.